Jeb's gift for Trump and Cruz: Bush won't go down without taking all the also-rans with him

After months of flailing, Jeb Bush finally found a good use for all his money: wholesale destruction of his rivals 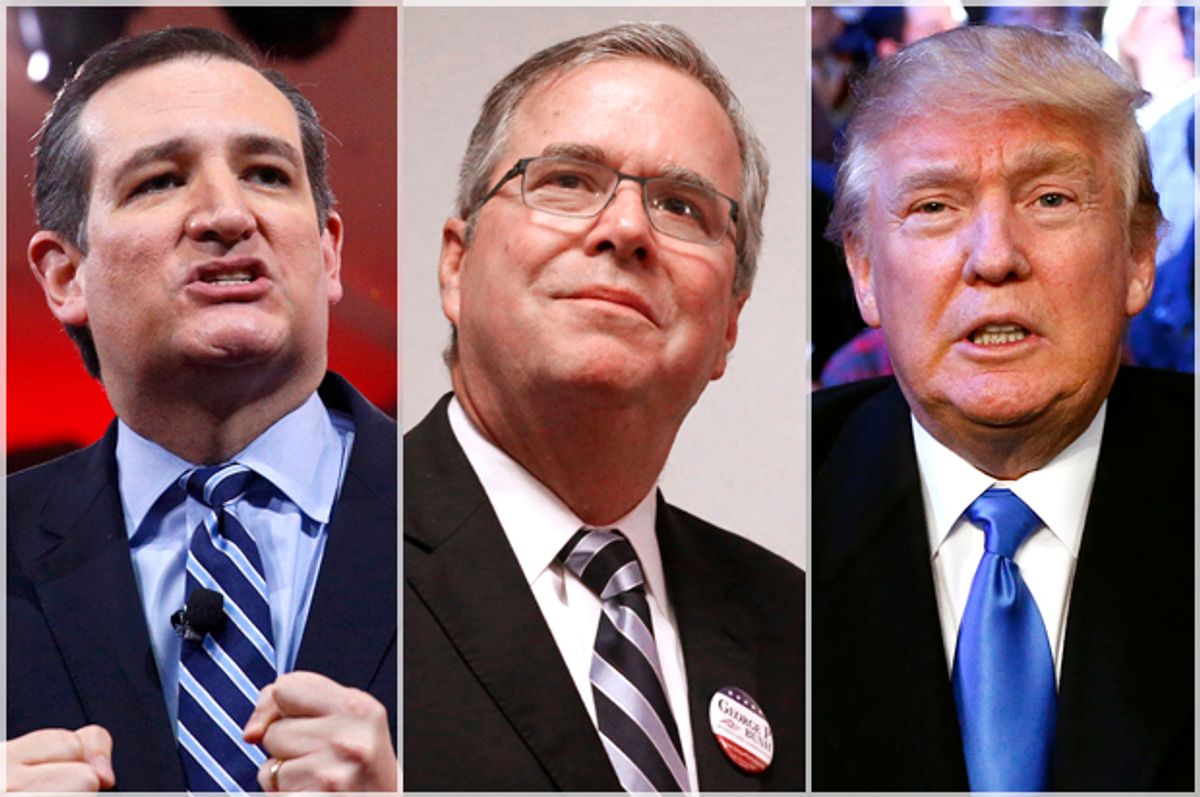 Jeb Bush’s electoral operation has finally found an effective use for all the money it raised last year. For months and months, as his poll numbers sagged and Donald Trump turned him into a “low-energy” punchline, Jeb’s campaign and his super PAC invested millions upon millions of dollars in pro-Bush advertising that was supposed to help turn things around. They cut biographical ads and even shot a short “documentary” telling the Story of Jeb. They made sure everyone knew he cut taxes and slashed regulations and balanced budgets when he was governor of Florida. And it was a giant bust. After all that spending – somewhere in the neighborhood of $30 million – the best case they could make is that they had stanched the bleeding. He’s been polling nationally in the mid-single digits since November.

But while Team Jeb isn’t all that good at promoting their candidate, they seem to have a knack for tearing other candidates down. As the New York Times reports this morning, Republican leaders are massively frustrated with the frenzy of intramural attacks between so-called “establishment” candidates, which is preventing any of them from rising to the increasingly daunting challenge of taking down Donald Trump. This problem is particularly acute in New Hampshire, where Trump holds a commanding lead in the polls, with the “establishment”-preferred candidates – Jeb, Marco Rubio, John Kasich, and Chris Christie – all whacking away at each other in a mutually destructive bid for second place.

Much of the frustration is aimed at Jeb, whom GOP leaders don’t view as a viable candidate, but who nonetheless maintains a massive orbiting death ship in the form of Right to Rise PAC, which is raining hellfire down on any candidate that threatens Jeb’s vanishingly small chance at securing the nomination. As the Times notes, they’re particularly irked by the Bush attacks on Marco Rubio, who is generally viewed as the best of the non-Trump, non-Cruz candidates:

Asked about the attacks, [former Rep. Tom] Cole, who has not endorsed a candidate, suggested Republicans would not tolerate them much longer if Mr. Bush did not show viability in Iowa and New Hampshire.

“You need to be prepared to stop if the evidence is that it’s not working,” Mr. Cole said, lamenting the “amazing amount of resources wasted on one candidate.”

[GOP strategist Henry] Barbour, who is also uncommitted, was even blunter. “Why is Right to Rise spending all this money on someone who can beat Hillary?” he asked. “Meanwhile, Trump and Cruz go mostly unscathed.”

It must be terribly frustrating, but this implication that Jeb should hold his fire doesn’t make a ton of sense. If you assume that Jeb is serious about campaigning for president, and you also assume that Rubio is one of the stronger candidates running in the GOP field, then why shouldn’t Jeb attack him? And the money isn’t wasted, at least not by Jeb’s reckoning. Jeb knows that the only chance he has is to prevent the party from uniting behind a candidate like Rubio, and as of right now that still hasn’t happened.

And for all the talk of Rubio’s potential strength as a consensus candidate of the Republican establishment, he still hasn’t consolidated their support. At this moment he’s running in fourth place in New Hampshire, behind a surging John Kasich and within three points of Jeb. Rubio’s actually dropped a few points from his peak at the beginning of January. If you assume the attacks from Right to Rise help explain that softening of his support, then why would Jeb’s people dial back? They want to beat Rubio. Or, at the very least, they don't want Rubio to "win" second place convincingly.

And again, tearing his fellow candidates down seems to be the only thing Jeb shows any real aptitude for. He can’t make himself seem more appealing, so his only recourse is to make everyone else look worse. If the GOP establishment finds that irksome, well, then they probably shouldn’t have given him so much money.