Now he's hooked the Christian conservatives: Accept it, Donald Trump's not fading — even more on the right are buying his snake oil

It was reasonable to believe that Trump would have flamed out by now, but instead he's moving in for the kill 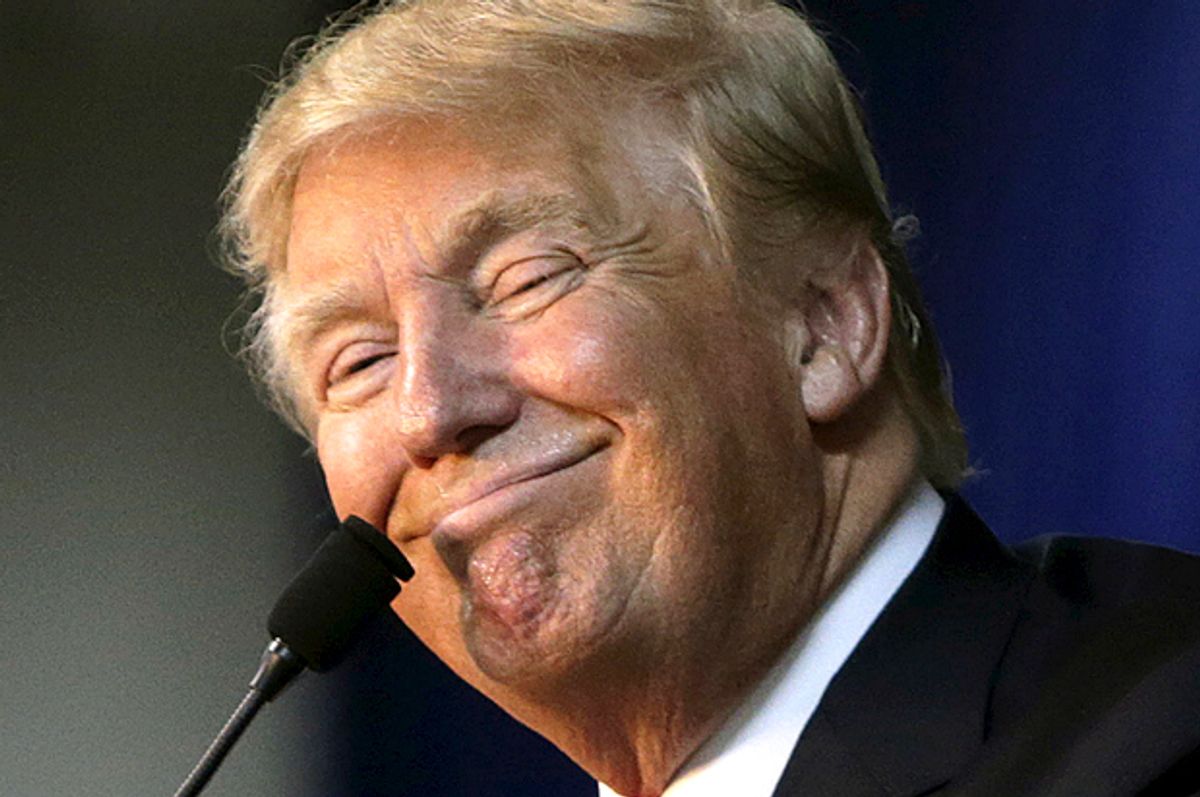 Donald Trump might actually be able to pull it off. A new, nationwide poll from CNN/ORC shows that Trump's lead in the Republican polls has grown even stronger going into the Iowa caucus, which kicks off the primary season. He's reached 41 percent support amongst Republican voters, which is more than double what his closest contender, the even more ridiculous Ted Cruz, has. Even more startlingly, Trump's supporters seem more assured of their votes than the supporters of any other candidate. It seems Trump might do what seemed to be impossible: Overcome the resistance of party leaders to grab the nomination.

Since Trump entered the race over the summer, the expectation in the political media was that he couldn't win. His campaign doesn't need to implode for that to happen, either. Brian Beutler of the New Republic explains what the assumed strategy for a Marco Rubio or Jeb Bush was: "First, party actors would settle on a single candidate to represent the party’s institutional wing; then, slowly, that candidate would consolidate institutional and stakeholder support, until, by late January or some time in February, he would enjoy plurality support, if not majority support, of primary voters and eventually clinch the nomination."

It's easy to laugh at that, but you shouldn't. That's how John McCain got the nomination in 2008 and Mitt Romney got it in 2012. And let's be clear that it could still happen. The real primary season doesn't start for three more weeks, when non-trifling states like Nevada and South Carolina jump into the mix. As long as candidates don't drop out after Iowa and New Hampshire, they have a chance. Put your chicken counting calculators away, because three weeks is a long time in Republican politics.

That said, things are looking a lot better for Trump than anyone could have predicted. Part of the issue is that his closest contender, Ted Cruz, hasn't made the progress he clearly thought he would at this late stage.

Mea culpa time. I've long thought that Ted Cruz had a strong chance of knocking Trump out of the race, and that Cruz would either win the nomination or at least winnow it down so that Rubio could sneak up and grab it. In my own defense, the theory was pretty sound. I argued that Christian right voters would move away from go-nowhere candidates like Mike Huckabee and Ben Carson and coalesce behind a single candidate. It seemed that Cruz, who is an even nastier bully than Trump but speaks fluent evangelical-ese in a way that Trump can't master, was well-positioned to suction up those Christian right voters.

And now Jerry Falwell Jr. is endorsing Trump. This is doubly huge because Cruz used Liberty University, which Falwell is the president of, as the stage to announce his run for presidency. But such is the Trump-momentum that Cruz is getting left behind even by those whose support he thought he could count on.

Trump's ability to win over evangelical voters is the surest sign yet that his campaign will not collapse as quickly as every predictive model imaginable suggested it should. Prying Christians off Trump should have been easy! He's been married three times and literally cheated on his first wife in a church. His attempts to pretend he cares about religion have been limp and unconvincing, and yet, his base of support with evangelicals is only getting stronger.

The best explanation for why comes from Adam Lee of Daylight Atheism, who points out that "evangelicalism isn’t especially concerned with beliefs, nor has it ever has been."

"Whether it’s Prohibition and communism, dancing and divorce, or abortion and gay marriage, evangelicals’ pet causes have changed radically over the decades," he adds. "The issues themselves have only ever been important as a boundary marker, a way to delineate Us from Them."

Trump fails comically to convince anyone he's ever even cracked a Bible, he is the master at the "us vs. them" narrative. It turns out this is actually all the majority of Christian conservatives needed. All that stuff about Jesus and family values was merely window dressing. All that really matters is being told that people like them are better and more worthy than other people, and whoever can do that the most effectively — turns out that's Donald Trump – will beat out the competition.

Again, there is a long time to go before voting really commences beyond a couple of piddly primaries that hardly matter to the bottom line. A lot could happen. Maybe Ted Cruz finally gets that "New York values" attack to stick, convincing voters that Trump is not in the "us" category but in the "them" category. Maybe, as many pundits continue to believe, Republican voters crack at the last second and start voting for "safe" candidates that have a better shot at beating the Democrat in the general election. Maybe a hot mic catches Donald Trump saying Christians are losers. A lot could happen between now and then.

But right now, it's looking like this Trump thing might not actually be a fluke. If so, it will prove the truth of that old adage, that you can never go broke underestimating the intelligence of the American public. At least the Republican-voting American public, that is.