Storms vs. terror: More Americans killed in weekend blizzard than Islamic extremist attacks in 14 years after 9/11 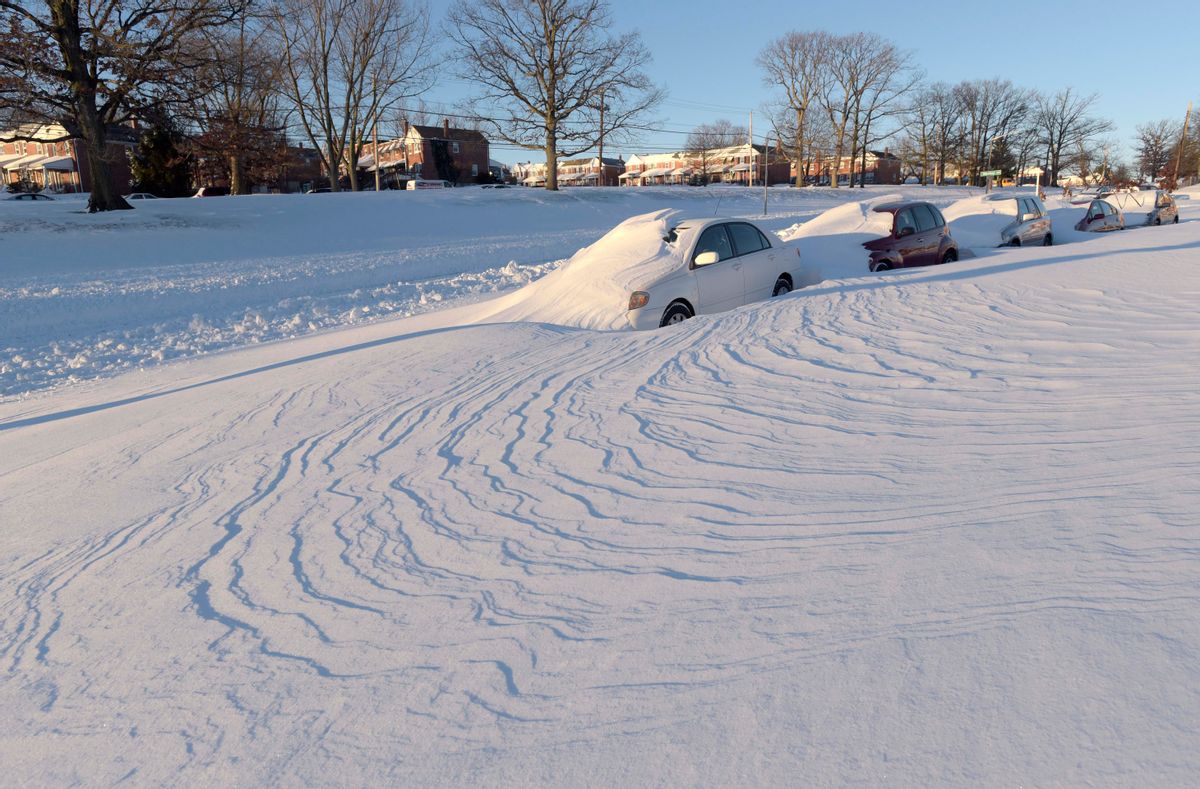 Wind-blown snow buries vehicles, Sunday, Jan. 24, 2016, in Parkville, Md. Millions of Americans were preparing to dig themselves out Sunday after a mammoth blizzard with hurricane-force winds and record-setting snowfall brought much of the East Coast to an icy standstill. (AP Photo/Steve Ruark) (AP)
--

Jonas was not kind, to put it mildly.

The U.S. was hit with a record-breaking snow storm over the weekend. At least 41 Americans were killed in the massive blizzard, dubbed snow storm Jonas.

Many died in car accidents, with icy roads covered in blankets of snow greatly increasing the chances of deaths and injuries. Several died from carbon monoxide poisoning, such as a 23-year-old New Jersey mother and her son, after their car was stuck in the snow.

New America, a non-partisan think tank, calculated in mid-2015 that 26 Americans were killed by self-proclaimed jihadists in the 14 years after the Sept. 11, 2001 attacks.

That is to say, more Americans were killed in snow storm Jonas over the weekend than by Islamic extremists in the more than 5,000 days after the 9/11 attacks.

Just four weeks ago, in late December, Salon reported that more Americans had been killed in storms over Christmas weekend than in Islamic extremist attacks since 9/11, including the December attacks in San Bernardino, in which 14 Americans were killed.

At least 43 Americans died in December's extreme weather. Together, more than 84 Americans were killed in the two storms.

And the loss of human life is not the only damage the U.S. endured from the weekend's blizzard.

Economists estimate the damages and losses precipitated by snow storm Jonas will be approximately $3 billion, not including the cost of repairing infrastructure.

More than 12,000 flights were cancelled. Retailers lost an estimated $860 million, and restaurants were particularly hard hit.

The House of Representatives postponed all votes for the week, and federal offices in Washington, D.C. remained closed on Monday.

The storm affected 20 states, and broke records in several on the East Coast. Glengary, West Virginia was pummeled with 42 inches of snow.

As Salon stressed in its previous report on the Christmas storms, this extreme weather has become the new normal, in an era of out-of-control anthropogenic (aka, human-caused) climate change.

2015 was the hottest year ever on record. And with extremely hot temperatures come extremely cold ones — along with extreme weather.

The World Meteorological Organization warned that the "years 2011-2015 have been the warmest five-year period on record, with many extreme weather events — especially heatwaves — influenced by climate change."

While Jonas was hitting the U.S., the Weather Channel's lead meteorologist Michael Palmer said the storm is "likely to go down as one of the most impressive blizzards we've seen on the Eastern Seaboard in recorded history."

Meteorologist Eric Holthaus detailed in Slate "how global warming helped turned the blizzard of 2016 into a record-breaking storm."

In the first two Democratic presidential debates, Sen. Bernie Sanders insisted anthropogenic climate change, not Islamic extremism, is the greatest threat to national security. "The scientific community is telling us that if we do not address the global crisis of climate change, transform our energy system away from fossil fuel to sustainable energy, the planet that we’re going to be leaving our kids and our grandchildren may well not be habitable," he warned.

Storms like those seen last weekend and over Christmas weekend show just how correct Sanders is.

Despite how much politicians talk about improving the economy, boosting business and growing the country's GDP, none of this ultimately matters if the climate change the economic system produces brings with it more extreme weather, not to mention renders the environment and planet uninhabitable, in the process.

A comprehensive U.N. report released in November found that 90 percent of major disasters in the last 20 years have been weather-related. It also found that the U.S. had more weather-related disasters than any other country, including gigantic nations like China and India.

Roughly 606,000 people were killed in the thousands of extreme weather disasters in the past 20 years, and 4.1 billion more were injured, made homeless or left in need of emergency assistance.

The U.N. report estimated the costs of these thousands of weather-related disasters to be between $5 trillion and $6 trillion — or between $250 billion and $300 billion every year.

Yet the U.S. media, like the political establishment it so frequently and obediently echoes, has demonstrated that it is much more interested in significantly smaller threats like Islamic extremism. A study by the Intercept found that, in a month-long period, CNN mentioned "terrorism" and "ISIS" 831 times, and climate change just 135 -- 615 percent less (it mentioned poverty just 34 times, over 2,400 percent less). Other leading corporate media outlets had similarly poor records.

In short, the U.S. is missing the forest for the trees, ignoring the greatest threat it faces: climate change.

Snow storm Jonas is just another example — and there will, unfortunately, be many more as climate change gets worse and worse, as governments refuse to take drastic action and as fossil fuel corporations maintain their chokehold on the political and economic system.

"Greenhouse gas emissions, which are causing climate change, can be controlled," World Meteorological Organization Secretary-General Michel Jarraud emphasized last year. "We have the knowledge and the tools to act. We have a choice. Future generations will not."