Amazon is killing our cities: We're bingeing "Transparent" while a long-term disaster builds

Amazon is investing in exciting TV and film projects, great! And a new study shows the real cost of doing business 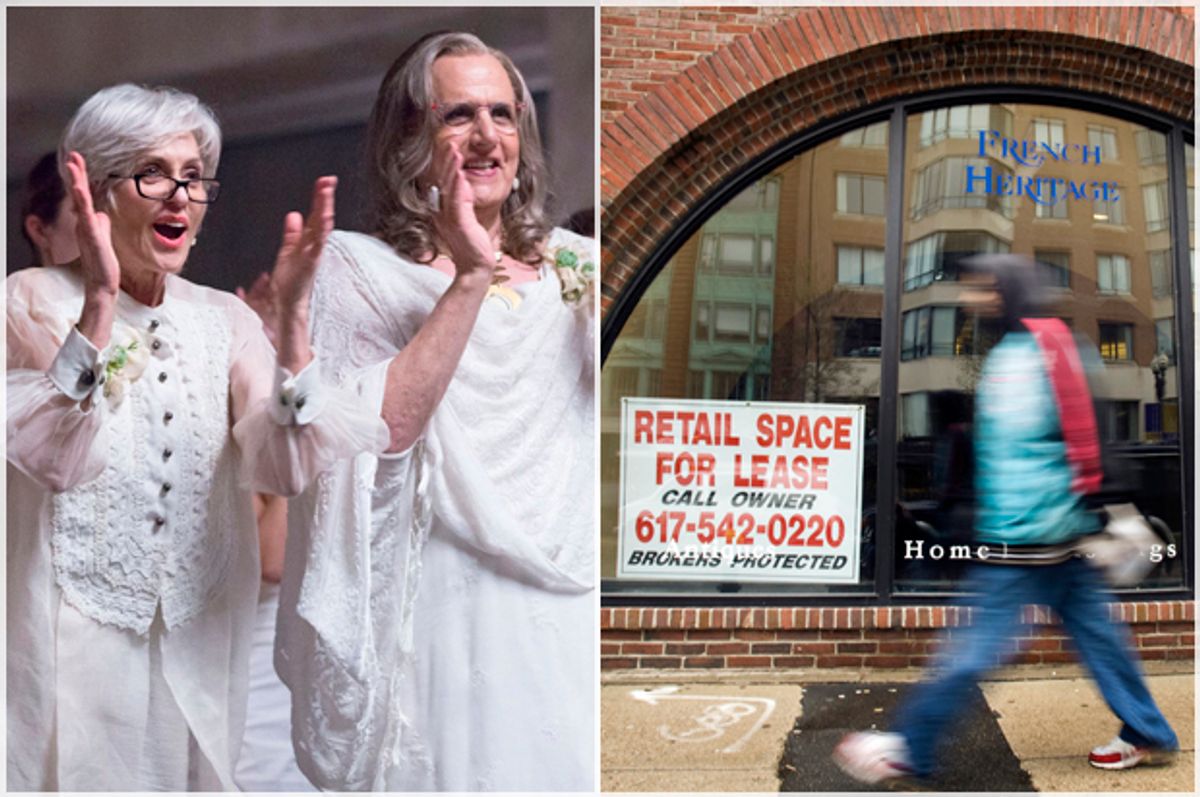 On the surface, Amazon has been on a winning streak lately – a streak that’s good not just for the company but for American culture at large. Its series “Transparent” is one of the best on television, and came along at a perfect time to ride the wave of interest in transgender issues. “Mozart in the Jungle” is both appealing and, thanks to its Golden Globe awards, a rare chance for classical music to reach a reasonably wide audience.

On the film side, Amazon’s “Chi-Raq” has been Spike Lee’s best-reviewed, most talked-about film in years. And Amazon seems to be on its way to dominating the purchase of films at this year’s Sundance Film Festival: It bought “Manchester by the Sea,” a promising film starring Kyle Chandler and Casey Affleck, for $10 million. (Netflix, it’s worth noting, is also buying films faster than the traditional distributors.) Under the ownership of Amazon founder Jeff Bezos, the Washington Post is thriving.

So there’s no question that Amazon is offering money to worthwhile projects. But a new report shows what the online retailer is also doing: Amazon is not only killing bookstores – we knew that part – it’s changing land use in cities and undercutting the funds that have sustained state and local governments.

Apparently, the impact is there is more than a billion dollars in lost tax revenue. (That’s from Amazon alone; add up all the other companies that sell through the Internet, and the number triples.) If that money isn’t taken out of roads and schools and other things that taxes pay for, guess who pays for it? You do, when you file your taxes.

Here’s part of the report put together by the American Booksellers Association and the group Civic Economics (full summary here). In its dry way, this passage answers the question: While we watch their shows, what are Amazon and other online sellers doing to our cities and towns?

As Internet sales have risen unabated in recent years, little attention has been paid to the effects of that growth on American communities. Focusing on the industry leader, Amazon, this report looks at two broad classes of impact: Fiscal (relating to public revenue) and Land Use (relating to development patterns at the local level). This report looks at calendar year 2014, the last year for which good data is available. Online sales have, of course, only grown since then. In addition, we focus exclusively on Amazon, which likely accounts for only 1/3 or less of total online retail. Given those limitations, these findings should be seen as a sign of far bigger impacts to come.

To determine impacts, Civic Economics quantified Amazon sales at the state level to determine (a) how much sales tax went unpaid at the state and local level and (b) how the shift from bricks and mortar stores impacts property tax revenues. Nearly half of all states still collect no sales tax revenue from Amazon sales and others collect only partial sales taxes, producing a nationwide sales tax gap of $625 million. In addition, we estimate that the shift to online sales has resulted in a national reduction in demand for retail space totaling over 100 million square feet, the equivalent of over 30,000 traditional storefronts employing 136,000 workers. These land use changes result in uncollected property taxes of $420 million dollars.

What else is happening besides rips in the urban fabric and unemployed people? There’s a disturbing long-term possibility: Every time Amazon or Netflix buys a film at a festival, it’s good in the short term for the filmmakers. But because the films are released on a streaming service a few weeks after they play at a cinema, audiences have less reason to go to the movies. If the streamers keep buying films and box out distributors, movie theaters and film distributors get crushed: They will follow a similar path to bookstores, with their economic model undercut.

If this is OK with you, then enjoy the bounty Amazon offers. These shows are good!

How this works out on balance is something that everyone will have to think through using their own personal calculus: It’s an exercise in cognitive dissonance. But when you pay your Amazon Prime bill, just remember how else you – and the cities and towns around you — are paying the price.