Backing Trump to destroy him: Bizarre conspiracy theory behind the GOP elites' new love for the Donald 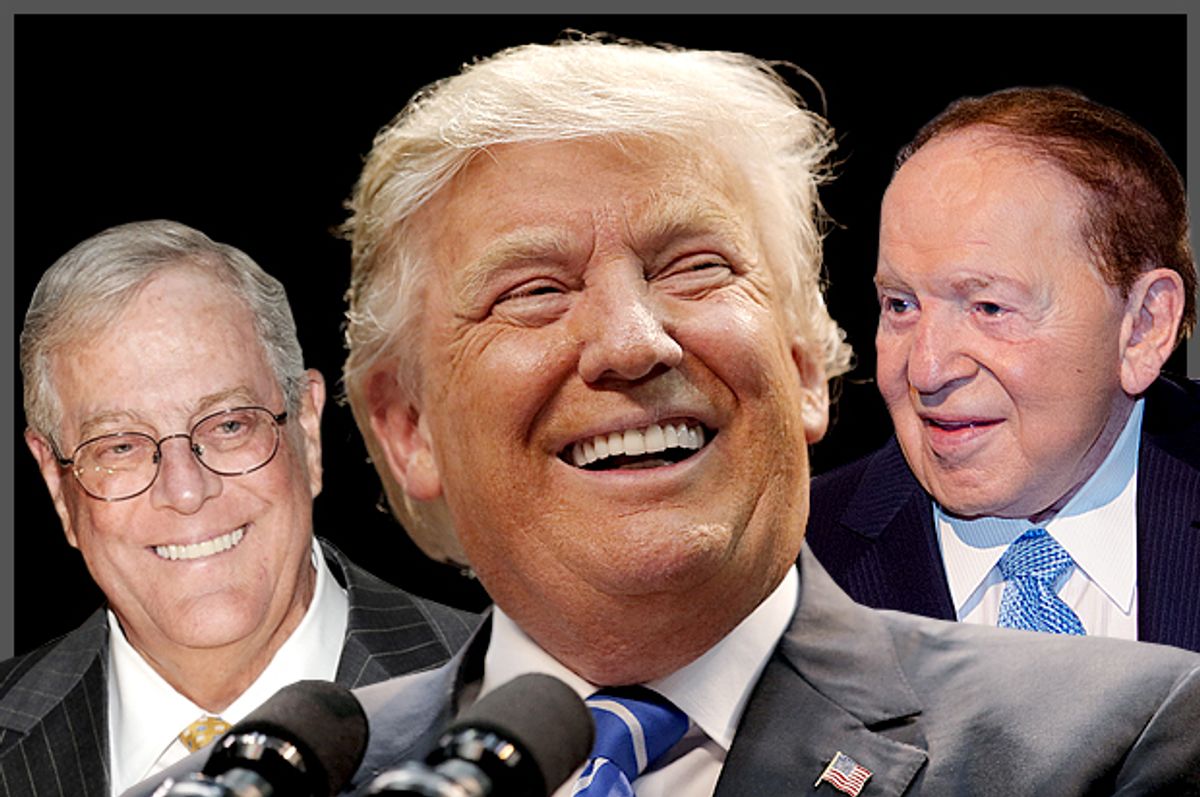 After spending some six months trying — and failing — to sink his presidential campaign through conventional means, the Republican Party establishment has decided to tackle its Donald Trump problem from a different angle.

No more condemnatory Op-Eds from the Wall Street Journal; no more anti-Trump symposia in ideological, low-circulation magazines that are primarily read by elites. No more warnings from party leaders about destroying the Reagan coalition; no more prophesies of letting a winnable presidential election slip from the hands of the GOP.

For at least the time being, the GOP’s hated establishment will no longer place itself in direct opposition to the Donald. That approach simply didn’t work; if anything, it was a gift to the Trump campaign. So now the establishment is coming after Trump from the completely opposite direction. Unable to beat him with a head-on confrontation, they’re going to try to kill him with kindness instead.

Or at least that’s the theory being tossed around right now by some of our smarter left-of-center pundits, such as Slate’s Jim Newell and Vox’s Matt Yglesias. It’s their best guess as to why Republican Party elites have decided to spend these last few days before the Iowa caucuses denouncing Sen. Ted Cruz, the only candidate besides Trump with a strong chance of winning the Hawkeye State.

Here’s the theory as Yglesias, who says it was first proposed to him by “one political operative,” understands it: “Establishment Republicans aren't choosing Trump over Cruz because they prefer Trump to Cruz. They are backing Trump over Cruz because they think doing so is the best way to stop Trump.” It sounds circular, I know. But in the bizarro-world that is the 2016 campaign, it does make a certain kind of sense.

The thing to keep in mind is that the establishment, if it’s really doing this, doesn’t really care if Trump wins Iowa. There’s a real history of fringe-y candidates winning the state’s caucuses before fading into irrelevance. As far as they’re concerned, he can have it. Especially if his winning can be spun as a result of Cruz choking — a narrative that, if it sticks, could spell doom for the Texas senator’s campaign.

But that’s just Step 1. And as Newell notes in his writeup, it would be a mere prelude before going after the Donald once again:

The second objective, and a much longer-term one, is to take out Trump. Trump’s Iowa win would likely ice his New Hampshire victory. But if Cruz’s Iowa loss takes him out of the running for second place in New Hampshire, that silver medal would likely go to Sen. Marco Rubio, Jeb Bush, Gov. John Kasich or Gov. Chris Christie. Rubio would seem to have the edge following a likely third-place Iowa finish that Bush’s super PAC has been trying so hard to deny him. And if Rubio finished second in New Hampshire, the other three establishment-acceptable candidates who’ve pinned their hopes on New Hampshire would face overwhelming pressure to drop out. Rubio consolidates that voting bloc, holds his water against Trump through the South, scoops up the larger, more moderate winner-take-all states beginning March 15, becomes the nominee, and crushes Hillary Clinton by a trillion electoral votes.

This is the essence of the moonshot, and it’s the part that sort of makes sense. But if you still find it underwhelming, that’s for a good reason. As Newell writes, “We are talking about a strategy that cedes Trump the long sought Iowa–New Hampshire double and a dozen or so additional states over the course of a month … and then bets on Trump losing the nomination” (emphasis his).

It’s a strategy, in other words, that only works if we assume that the GOP establishment can maintain some semblance of control over events. Or if we assume that Trump, for all his pugnacious iconoclasm, is someone that these party leaders can rein in. But at the risk of belaboring the obvious: If this were true, Republican elites wouldn’t find themselves in this situation in the first place! They would’ve stomped Trump already.

As Yglesias writes, “[I]f Trump wins Iowa and then wins New Hampshire (where he currently has a big lead), he may well just end up sweeping the table.” How likely would that be? Well, the last time a candidate won Iowa and New Hampshire and didn’t win the nomination was in 1972. That’s more than 40 years ago, when Richard Nixon was still the president and the Watergate was just one of many Washington hotels.

Assuming that there’s at least something to this theory, it’s hard not to wonder if the Republican Party establishment is vastly overestimating its own power and influence — and not for the first time this cycle, either. Mixed in with all this wishful thinking is no small amount of denial and rationalization; and an unwillingness to view the GOP as something more than their personal plaything, above all else.

Lord knows it wouldn’t be the first time that these self-styled Masters of the Universe failed to recognize their own limitations. (Perhaps you’ve heard of the 2008 financial crisis?) But rarely is their cluelessness so apparent; usually there’s some ideological window-dressing — like the idea of a self-regulating market — providing camouflage. In this instance, on the other hand, it may be that what you see is what you get.

If that’s the case, then good news should be heading Trump’s way in the very near-future. I’m less optimistic, however, about how the folly of the Republican establishment will play out for the rest of us.