Hillary lags among men, again. Is it misogyny, or her brand of feminism? The story too hot for the New York Times 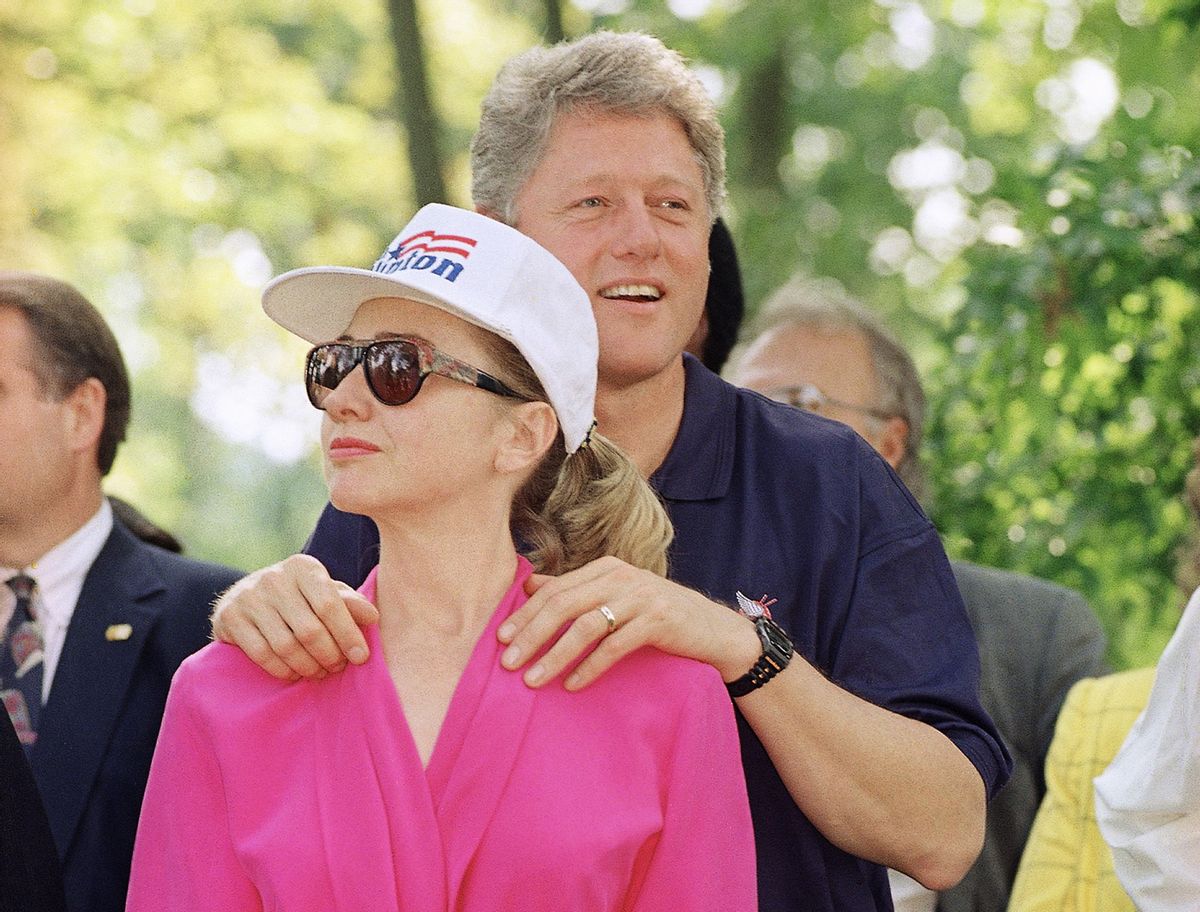 During her two presidential campaigns, Hillary Clinton has consistently drawn greater support from women than men. Is this gender lag due to retrograde misogyny, or does Hillary project an uneasiness or ambivalence about men that complicates her appeal to a broader electorate?

As a career woman, Hillary is rooted in second-wave feminism, which began with Betty Friedan’s co-founding of the National Organization for Women in 1967, while Hillary was in college. Friedan sought to draw men into the women’s movement and to ally with mainstream wives and mothers. But after a series of ideological struggles, she lost her leadership role and was eventually eclipsed in media attention by the more telegenic Gloria Steinem, who famously said, “A woman needs a man like a fish needs a bicycle.”

Hillary has unfortunately adopted the Steinem brand of blame-men-first feminism, which defines women as perpetual victims requiring government protections. Hillary’s sometimes impatient or patronizing tone about men, which can perhaps be traced to key aspects of her personal history, may prove costly to her current campaign.

In his biography of Hillary, "A Woman in Charge," Carl Bernstein detailed the abuse and humiliation regularly visited by her domineering father, Hugh Rodham, on her mother Dorothy. Hillary has tersely admitted the strict physical discipline inflicted upon her and her two younger brothers by their father, who maintained a drill-sergeant atmosphere in their Chicago home.

It is often mistakenly said that by staying in her marriage to the philandering Bill Clinton, Hillary was following the standard pattern of her generation. But it was her rebellious baby-boom generation that spread and normalized once rare and scandalous divorce. In preserving her marriage despite repeated humiliation, Hillary was embracing and reaffirming the painful decisions made by her own mother.

The “enabling” with which Hillary has been charged in her conflicted marriage may actually have been the pitying indulgence and half-scornful toleration that she first directed toward her brothers. She demoted her husband to a fraternal role—the shiftless “bad boy” in chronic need of scolding and spanking. Bill may have acknowledged this a year before his marriage, when he reportedly told Arkansas college student Maria Crider about his future wife: “She gets me started, kicks my butt, and makes me do the things I’ve got to do.”

Hillary’s deep, defensive bonding with her beleaguered mother has been replicated in her close relationship with her daughter Chelsea, who was old enough to witness the trauma of her father’s 1998 impeachment. In her 2008 campaign, Hillary was widely mocked for having fabricated a dramatic story about her and Chelsea running for cover under sniper fire after landing in war-torn Bosnia. In admitting she had misspoken, Hillary claimed she had been “sleep-deprived” at her Washington press conference.

But surely that overwrought action-adventure tale was a strange flashback to an episode from Hillary’s youth, as reported by Mr. Bernstein: the usually stingy Hugh Rodham had once treated his wife and daughter to a shopping spree at a New York department store. Under tight time pressure from Hugh, the two women pulled off their shoes and ran laughing and barefoot together through the store. The non-existent Bosnian sniper fire may have been a shadowy memory of the strafing dictates of an authoritarian father, against whom mother and daughter were united in conspiratorial defiance.

As a teenager, Hillary Rodham adopted her father’s conservatism and campaigned for Barry Goldwater in the 1964 presidential campaign. In her freshman year at the all-woman Wellesley College, she was president of the Young Republicans club. But her political views so shifted that she wrote her senior thesis on radical activist Saul Alinsky, a Chicago community organizer. Her rejection of Alinsky’s job offer and decision to enter Yale Law School instead (“I need three years of legal rigor”) suggested a newfound feminist determination to break from father figures.

As the class speaker at her Wellesley commencement ceremony in 1969, Hillary went off script to rebut and rebuke the honored guest speaker, Massachusetts senator Edward Brooke, an elegant centrist Republican who was the first African-American elected to the U.S. Senate by popular vote. This incident, which won Hillary a photo spread in Life magazine, can be alternately viewed as a brave generational gesture or an act of crass discourtesy with anti-male overtones.

Hillary’s decision to move to Arkansas to be with Bill, whom she had met in law school, followed her shocking failure of the District of Columbia bar exam. As his most trusted counselor and strategist, she helped guide her husband’s rise to attorney general and governor of Arkansas, but at every point, her professional life, culminating in a partnership at the Rose Law Firm, was at least partly derived from her association with him—not an ideal feminist paradigm.

It was in Arkansas that Hillary’s identity crises began. She endured a cultural displacement and isolation as severe as Jacqueline Kennedy’s when she married Aristotle Onassis and found herself ostracized by his traditionalist Greek cronies. Hillary seems to have had little respect for the Southern gender code, a product of the close-knit agrarian past. She never reconciled herself to the good ole boy fraternity with whom her husband loved to shoot the breeze, and she was wary of the governor’s security detail, whom she suspected of complicity in his infidelities. Insisting at first on keeping her maiden name, she finally surrendered to Southern convention after her husband lost his first gubernatorial reelection bid.

A 1979 photo of Bill and Hillary Clinton arriving at the White House for a dinner honoring the nation’s governors shows her with big, owlish eyeglasses and a mass of nondescript dark hair. Her subsequent fashion and hair transformations, extending through both Clinton presidencies, were astonishing. It was as if Hillary oscillated between her core identity as a gender-neutral social-activist warrior and a florid female persona so foreign to her nature that it sometimes seemed like drag.

Hillary’s most drastic metamorphosis was when she went blonde and acquired blue contact lenses (her eyes are naturally brown). The model for this change may ironically have been Gennifer Flowers, a Little Rock singer who claimed to have been Bill Clinton’s mistress for twelve years. I had the opportunity to see Flowers perform (and briefly speak to her) at her New Orleans nightclub in 2004. Then in her mid-50s, she still radiated a stunning charisma. She had the silky, soothing manner and warm hospitality of the classic Southern woman—far from the “trailer park” realm to which Democratic consultant James Carville viciously consigned Mr. Clinton’s accusers.

When rumors about Flowers surfaced during the 1992 presidential campaign, Hillary defended her husband by vehemently asserting on CBS’s "60 Minutes," “I’m not sitting here—some little woman standing by my man like Tammy Wynette.” Hillary later apologized to Wynette, but her caustic remark seemed to betray Hillary’s Seven Sisters class bias against a spectrum of Southern women admirable for their own strength, tenacity and grit.

Gennifer Flowers is no historical footnote but rather a ghostly twin, a lingering admonishment to Hillary of everything that second-wave feminism resentfully tried and failed to change in sexual relations. Perhaps it may be impossible for hard-driving career women, schooled in the curt, abrasive Northern style, to give an inch and show that they actually like men as they are. But a top-tier politician like Hillary Clinton is narrowing her presidential chances when she privileges elite professional women at men’s expense.