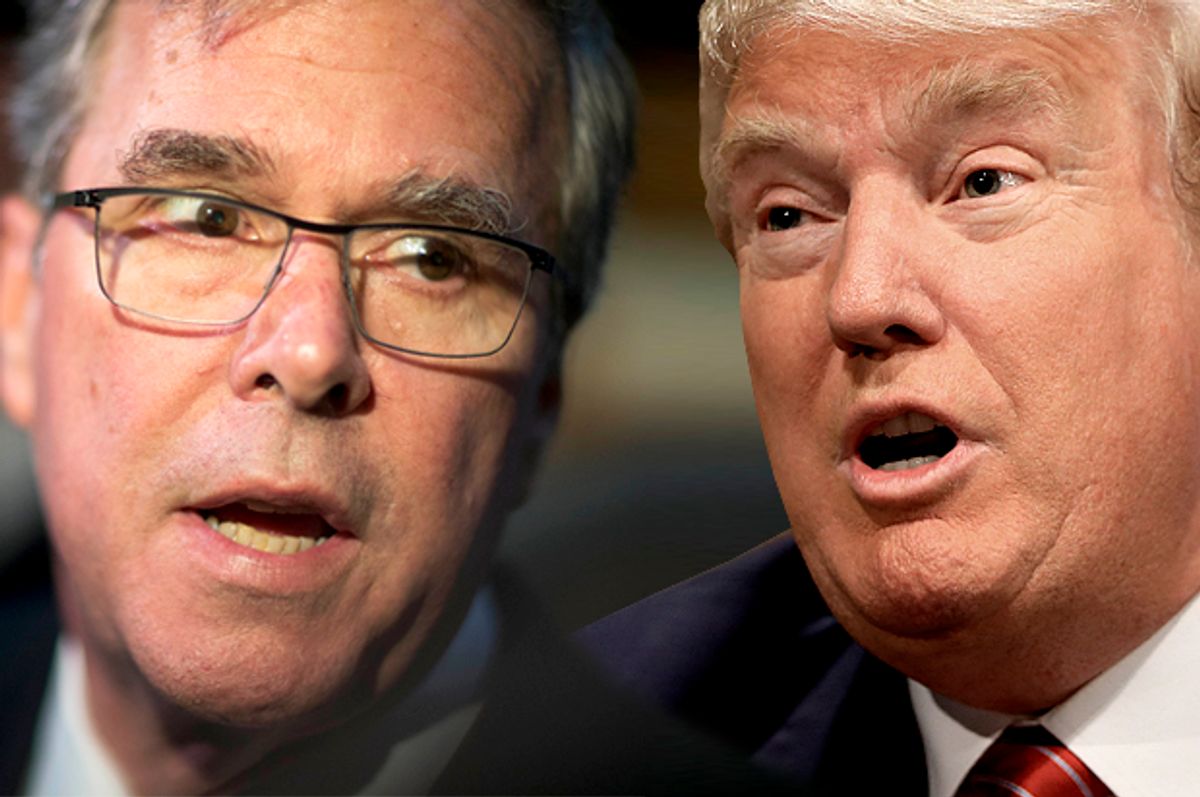 The Republican presidential race has been as bewildering and unpredictable as any in recent memory. It's nearly impossible to say with certainty what will or won't happen. However, it's not too soon to say that Jeb Bush is done. An early frontrunner, Jeb's campaign has imploded in slow motion over the last few months. He's languishing in fifth place now, sandwhiched between a younger Marco Rubio and a louder Chris Christie.

It's hard to imagine Jeb turning things around at this point. Republican primary voters just don't like him, and his entire approach to politics is ill-suited to this kind of climate. As this becomes more and more clear, Jeb faces a difficult decision: How does he want to be remembered?

As is stands, Jeb is likely to be remembered as the entitled candidate who thought he could buy his way to the White House, but instead was emasculated by a raging clown whose campaign slogan, “Make America Great Again,” doubles as his platform. Even worse, Jeb is beginning to agitate Republican establishmentarians, who believe he's responsible for clearing a path for Trump.

A recent piece written by Stephen Hayes of the right-leaning “The Weekly Standard” sums up the prevailing sentiment on the right:

“In the fight between Donald Trump and conservatism, Trump has had fewer allies than Right to Rise, the super PAC supporting Bush's candidacy. There will be plenty of blame to go around if Trump ends up as the Republican nominee, but Right to Rise will have earned a prominent chapter those histories: cable and network television gave Trump endless hours of free publicity; influential conservative voices explained away his liberalism, excused his excesses, and legitimized his crazy; and Right to Rise, like an all-pro right guard, helped clear a path for Trump by blocking several of his would-be tacklers, in particular Marco Rubio. This was no accident. It was the plan.”

Such is the unenviable position Jeb now finds himself in: His only way to the nomination is via the establishment lane, and that means he has to attack the other “mainstream” candidates whose path also requires them to win over the establishment. Jeb tried to neutralize Trump, to defang him if you like, but that didn't work. The “low-energy” label, I'm sorry to say, fits, and Trump has exploited that masterfully.

So Jeb's team has pivoted away from Trump and turned its guns on Rubio, and to a lesser degree, Christie and Kasich. “If other campaigns wish that we're going to uncork money on Donald Trump, they'll be disappointed,” said Mike Murphy, the strategist behind Right to Rise. “Trump is, frankly, other people's problems.” Murphy added in a separate interview that he'd “love a two-way race with Trump at the end.”

For Republicans who know Trump or Cruz can't win a general election, this is a nightmare. Jeb is an objectively terrible candidate, but he has a lot of money behind him, and so he can influence the race despite having no chance to win it. For example, Right to Rise hasn't helped Bush, but it appears to have stalled Rubio's campaign in Iowa and New Hampshire. Hayes writes:

“On December 7, the pro-Bush super PAC launched its all-out offensive on Rubio, the first of what would become a $20 million assault on the Florida senator that ran nationally on Fox News and extensively in Iowa, New Hampshire and South Carolina. The first ad...asked voters to imagine Rubio in the Oval Office. Rubio 'skipped crucial national security hearings and votes just to campaign,' the narrator says. That ad was followed by another...that also hit Rubio for missing votes and a third...which alleged that Rubio was missing votes even before he decided to run for president.”

Again, these ads haven't destroyed Rubio, but they've undercut his momentum in early primary states. The conventional wisdom on the Right is that Rubio is the only establishment candidate capable of uniting the party against a Trump or a Cruz. If a circular firing squad led by Jeb's super PAC ends up fragmenting the party in such a way that Trump and Cruz are the only candidates left standing, then, as Hayes concedes, “the lasting legacy of Jeb Bush's 2016 presidential bid will be its prominent role in making Donald Trump the nominee and contributing to the crisis of conservatism that will follow.”