The GOP front-runner has escalated his feud with the right-wing network. The stakes are higher than ever 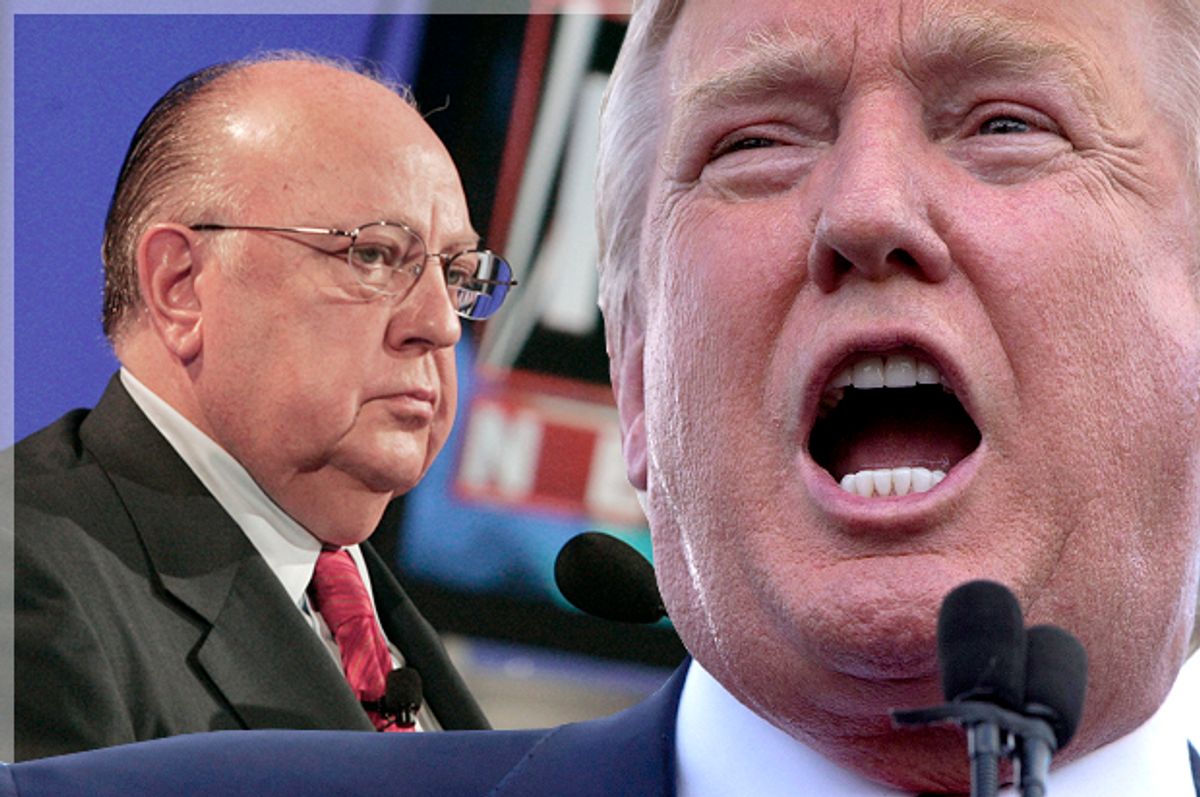 Donald Trump and Roger Ailes may be on opposite sides of a very bitter divide at the moment, but the presidential candidate and the head of Fox News actually have quite a bit in common. Both are megalomaniacal senior citizens. Both are brilliant showmen. Both eagerly traffic in endless racial falsehoods. Both are given to writing scorched-earth press releases. Both consider themselves the most important people in the world.

Perhaps this is why Trump and Ailes have been so at odds throughout Trump's 2016 campaign. Ailes has been used to bending Republican candidates to his will, but in Trump, he's met his match. Trump's decision to skip Thursday's Fox News debate was so bombastic, so audacious, so utterly weird that it might as well have come from Ailes's brain. Unfortunately for Ailes, it most certainly didn't.

In a way, the particulars of the impasse don't matter. True, Trump had repeatedly called for debate moderator and very prominent enemy Megyn Kelly to be scrapped from the lineup. True, Fox News had supposedly enraged Trump with its mocking press releases rejecting the suggestion. True, Trump's campaign manager apparently threatened Kelly in a conversation with Fox executives.

But really, this feels like Trump taking an opportunity to assert his supremacy over Fox News and declare that he, not the network, is in true control of the Republican primary process. The debate was merely a useful foil. Ever since Trump's campaign against Kelly last August, the two sides have co-existed uneasily. Something had to give, and now, Trump has made that happen.

There are obviously perils in Trump's chosen path. He has long since proven that he doesn't need Fox News like other people need it, but the network still packs a powerful punch. Up until now, it's struggled to find its footing where Trump is concerned. For every antagonist like Kelly, there are plenty of Sean Hannitys willing to curry favor. In spite of everything, Trump has been a steady presence on the channel. Blowing that all up, and possibly forcing the entire Fox hierarchy to turn against him, is no small thing.

But I suspect that Trump will ultimately win this fight. He probably wasn't wrong to assume that Kelly would come ready for battle. Fox News is, above all, a TV channel, and it knows that Kelly vs. Trump is fantastic television. By skipping the whole thing, Trump gets to avoid that ugly scene and still dominate the proceedings. His fellow Iowa frontrunner Ted Cruz will become the chief target of the evening, and people are much less wary of attacking Cruz than they are Trump.

Trump also knows that he has Fox trapped in the same way that he has the entire GOP establishment trapped. The network could easily train its fire on him, but it has nobody to elevate in his place. Marco Rubio? Jeb Bush? The audience wouldn't have it. And Ted Cruz is, well, Ted Cruz. Fox could go the National Review route, and fulminate about Trump's supposed sins against conservatism, but those efforts would fail for the exact reasons that the magazine's efforts did: first, nobody cares, and second, it's Trump's virulent nationalist racism, not his past statements on health care, that needs to be tackled. There's no evidence that Fox either disagrees particularly with Trump's bigotry, or that it is prepared to mount any concerted campaign against it. Without that, it is left pretty enfeebled. Meanwhile, Trump's every tweet will continue to be the top story on every news show. A Republican frontrunner who doesn't need Fox News: now that is something different.