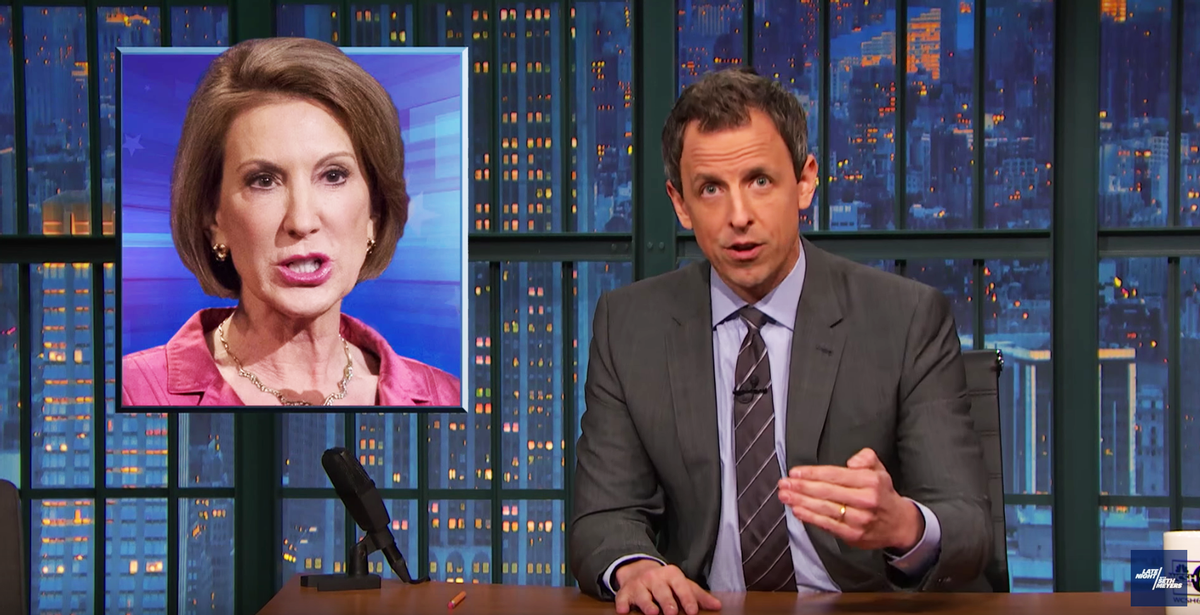 The series of "undercover" videos where some dude tried to buy fetal tissue got "Republicans more excited than your IT guy was about 'The Force Awakens,'" Meyers joked. The tapes became a huge issue in the GOP primary with Ted Cruz even calling Planned Parenthood a "criminal enterprise. And Ted Cruz would never say something that wasn't true!"

Planned Parenthood was found to have done nothing wrong, but the people that made the videos certainly did. So the GOP candidates flipped their shit for months over these videos. "Chris Christie called for shutting down the government over Planned Parenthood funding. Ted Cruz said that he would intervene personally to force the Justice Department to investigate. But the candidate who arguably stretched the truth the most when it came to these videos was Carly Fiorina." We, here at Salon, challenged her repeatedly on her lying lies about  Planned Parenthood. Clearly, there were many.

Meyers showed the clip from CNN where Chris Cuomo called her out on air and she looked like an idiot. "She's got a real Glenn Close in 'Fatal Attraction' vibe there," Meyers said, a little too on the nose. "So Carly Fiorina made these lies a key part of her campaign and even after they were prove to be lies she doubled down on them. But hey, she took a gamble and that paid off. If she hadn't she might not be polling as low as ninth place."

That's why Seth suggested defunding "Planned Bullshit where you edit tapes and you make fake ideas and you set up a make-believe company and you send a phony email trying to buy fetal tissue... All for the purpose of defunding something that provides health care for over 650,000 women."