Oregon militiamen fell right into the feds' trap: Sorry, liberals, the government was right to wait before taking them out

Despite complaints about federal inaction, it seems waiting out the Oregon militia was the best strategy 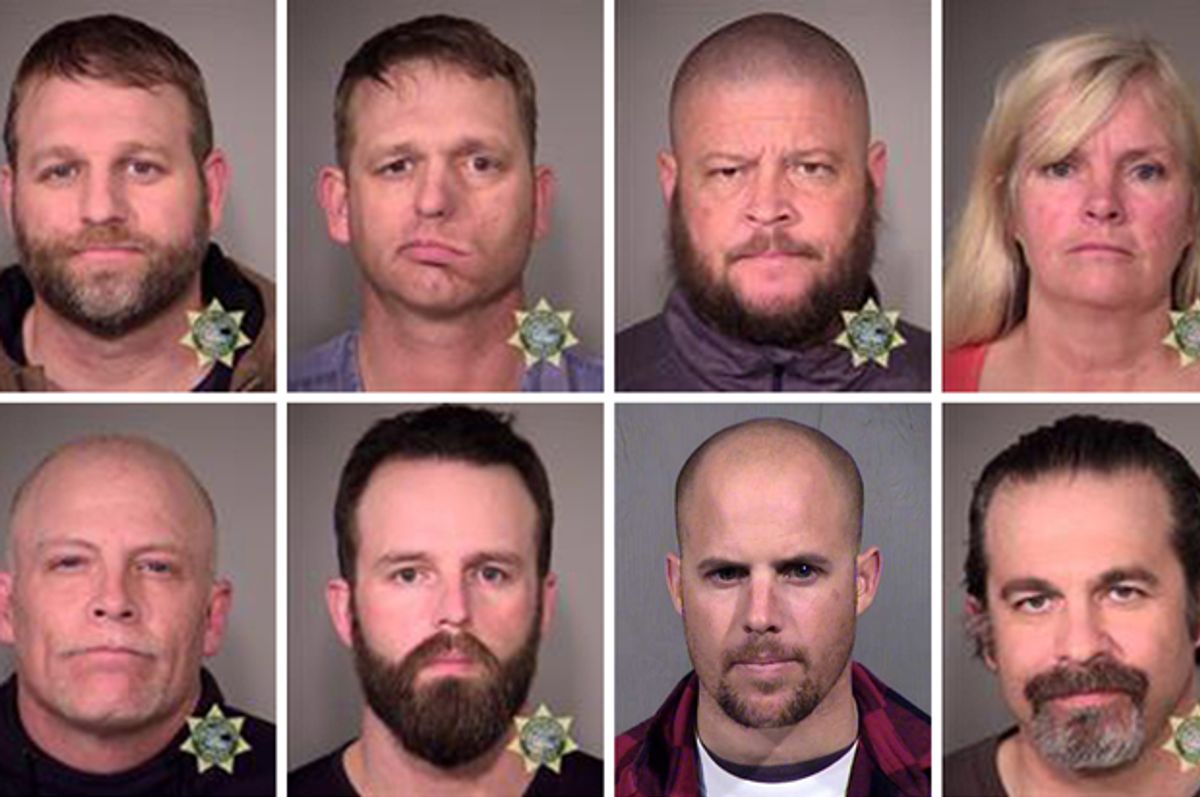 The minute that self-appointed militiamen stepped onto the property of the Malheur National Wildlife Refuge, liberals started worrying that these folks would not be held accountable for their criminal behavior. The group, led by the two sons of right wing radical Cliven Bundy, took over the refuge, demanding that the taxpayers turn over federal lands so that folks like the Bundys and other farmers, miners and other private interests could profit handsomely off the land without having to pay for it. It's clear that the militiamen expected the feds to rush the compound, causing a firefight in which they could be martyrs for the right wing cause of giving white conservatives a lot of free money while leaving the rest of us out to dry.

But that didn't happen. Instead, the federal government seemingly didn't do anything for many weeks, letting these guys get comfortable at the refuge and even go back and forth from it for grocery-shopping, media events, and whatever else their hearts desired. Only one occupier was arrested, for using a stolen vehicle to drive to the store.

This lack of interest in having a big ol' shootout right away on government property didn't just disappoint the militiamen. A number of liberal commentators were miffed that the feds seemed to be twiddling their thumbs, often arguing that if the occupiers were people of color, the shootout would have happened already. The criticism had some merit, of course, but the solution for such a double standard isn't to have more shootouts, so much as it's an argument against the quick-to-violence reactions law enforcement regrettably has when dealing with non-white suspects.

The occupation was expensive and disruptive, of course, leading the Democratic governor of Oregon to ask for the feds to step in. This only reinforced liberal suspicions that the feds were blowing this off and were not going to hold these yahoos accountable for their actions.

Well, those fears were proven most dramatically wrong Tuesday afternoon, when law enforcement confronted the militiamen on the open highway. A shootout did ensue, which was expected since these folks all have ridiculous martyr fantasies, and one person was killed. So far, there have been eight arrests, and the leaders of this fiasco are in custody. Now the feds have closed in on the refuge, closing roads and access. Without leadership or access to the outside, it won't be surprising if the rest of the people inside just give up soon enough.

The worrywarts were getting all worked up over nothing. Despite all the hand-wringing over whether the feds were taking this seriously enough, in the end, it turns out that the feds were right and the worrywarts were wrong. Waiting this out a bit, while unfortunately disruptive to the area, ended up being a far more sensible way of dealing with this than trying to raid the wildlife refuge.

Raiding the refuge was always a bad idea. For one thing it would give these wannabe martyrs exactly what they want, an opportunity to get hurt or die at government hands and become fuel for radical right wing propaganda. They even brought children onto the property to raise the stakes. In the past, federal raids under similar circumstances involving children---most notably in Waco---not only resulted in innocent lives being lost, but in providing right wing radicals even more justification to demonize federal authorities.

And while the occupation was disruptive and expensive, it would have been far more costly to give the militia the shootout at the refuge they wanted. These guys bragged about how they anticipated violence. They openly threatened that this would become another Waco. Rushing them at the compound would have caused expensive damage to the building, and possibly a fire if the militiamen made good on these threats. Repairing that would have cost a fortune and kept the refuge employees on leave even longer.

Instead, the feds let the militia get complacent and bored. They let the media attention drift away, forcing the militia to have to take more risks and leave the refuge more to get attention. What looked like federal inattention now looks a whole lot more like it was a trap being set to draw the militia members out.

If so, it worked perfectly. The militia members felt emboldened enough to travel 100 miles away from the refuge, and it was out there, without the shelter of the refuge, the presence of cameras, or the ability to use children or neighbors as human shields, that they were finally nabbed by law enforcement. No expensive destruction of property, no dead kids, no officers killed. Only one would-be martyr lost his life.

But this wasn't just a success from a damage control perspective, either. The federal strategy also kneecapped the propaganda value of this occupation. As I wrote earlier this month, the lengthy occupation gave the militiamen near-daily opportunities to show the world their true colors, proving that they aren't manly warriors taking a stand so much as a bunch of clowns playing dress-up.

The arrest is more of the same. Instead of staging some Alamo-inspired last stand in the refuge, they apprehended in the middle of nowhere because they were stupid enough to go on a road trip. The only way this could have been more demoralizing for their cause is if they were wearing adult diapers when they got caught.

The entire debacle isn't quite over yet. There are still some militia members holed up in the refuge. But their leaders have all been apprehended. Considering what idiots the leaders were, it's not unreasonable to think the people who were left to hold down the fort are even less capable of managing this situation. The federal strategy of being patient and waiting for an opportunity will most likely continue to pay off.

Instead of being angry that the feds didn't rush this compound, liberals should use this story to push for smarter, less aggressive policing generally. We're in the midst, prompted by the Black Lives Matter movement, of a nationwide discussion about the dangers of the "shoot first" philosophy of policing. This story if a perfect example of why it's better for police to be patient and focused on minimizing damage rather than trying to strong-arm the suspects in every situation. It's not just the right thing to do, but it's often the most effective way to get the bad guys without hurting innocent people in the process.