The Donald's refusal to participate is being met with amusement on the left, befuddlement on the right 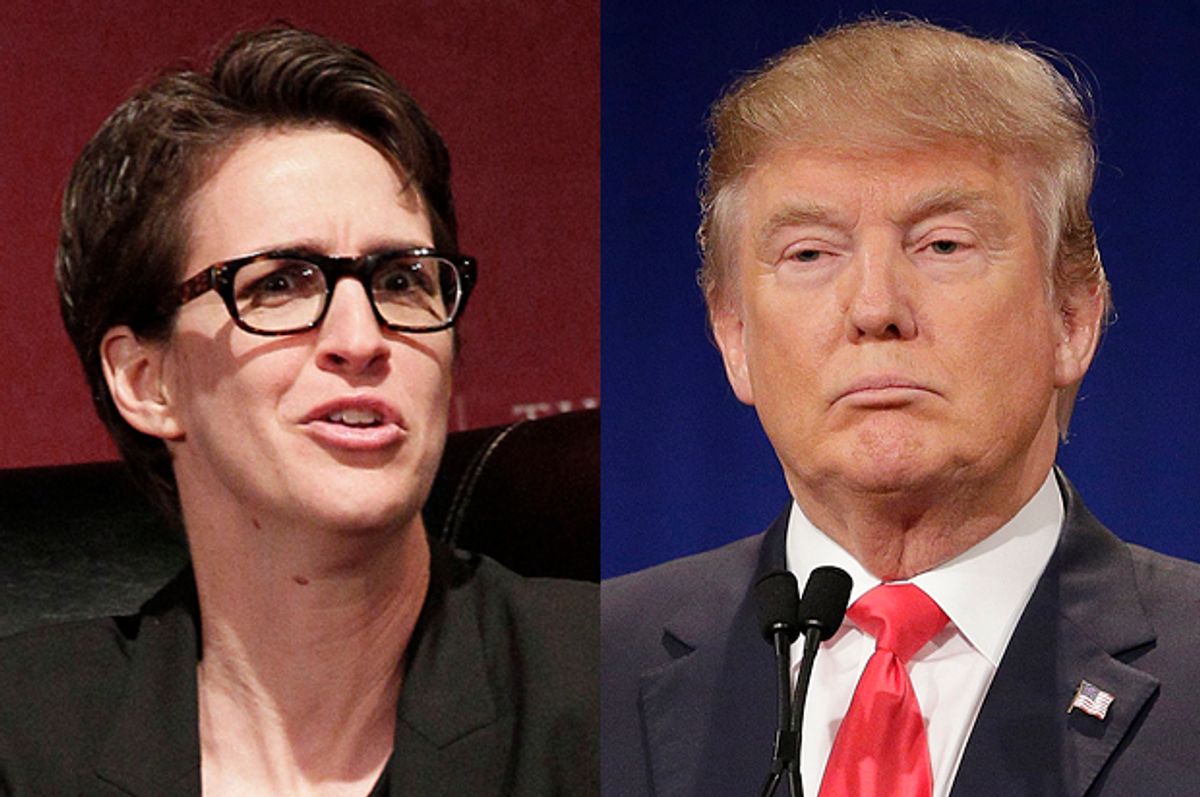 On "The Rachel Maddow Show" Tuesday evening, a coyly bemused Rachel Maddow discussed the decision by the Donald Trump campaign to pull out of Thursday night's Fox News/Google debate in protest over Megyn Kelly presence as a moderator.

She read from Trump's statement, which began in typically humble fashion, "[a]s someone who wrote one of the best-selling business books of all time, 'The Art of the Deal,' who has built an incredible company, including some of the most valuable and iconic assets in the world, and as someone who has a personal net worth of many billions of dollars, Mr. Trump knows a bad deal when he sees one."

Maddow speculated that the mention of his book in his statement might mean that the GOP front-runner is attempting to win some sort of concessions with his threat to not show up, but if that's the case, the opening of his second paragraph makes such a victory highly unlikely.

"Unlike the very stupid, highly incompetent people running our country into the ground, Mr. Trump knows when to walk away. Roger Ailes and FOX News think they can toy with him, but Mr. Trump doesn’t play games," the statement continued.

Maddow spoke to NBC's Katy Tur, who was in Iowa, and asked whether this was simply more Trump bluster, but Tur said that this time she believes he is serious about his threats, especially in light of the threats his campaign has reportedly issued.

Fox News released a statement, reading in part that "[i]n a call on Saturday with a Fox News executive, Lewandowski stated that Megyn had a 'rough couple of days after that last debate' and he 'would hate to have her go through that again.'"

"Donald Trump is refusing to debate seven of his fellow presidential candidates on stage that night, which is near unprecedented. We’re not sure how Iowans are going to feel about him walking away from them at the last minute, but it should be clear to the American public by now that this is rooted in one thing -- Megyn Kelly, whom he has viciously attacked since August and has now spent four days demanding be removed form the debate stage."

"We can’t give in to terrorizations toward any of our employees," it continued, and Trump "can’t dictate the moderators or the questions."

Trump is currently attempting to provide an alternate outlet for his message, possibly at an event benefiting Wounded Warriors.