LaVoy Finicum, the armed militiaman shot in FBI standoff, mourned by one GOP lawmaker with comparison to Jesus 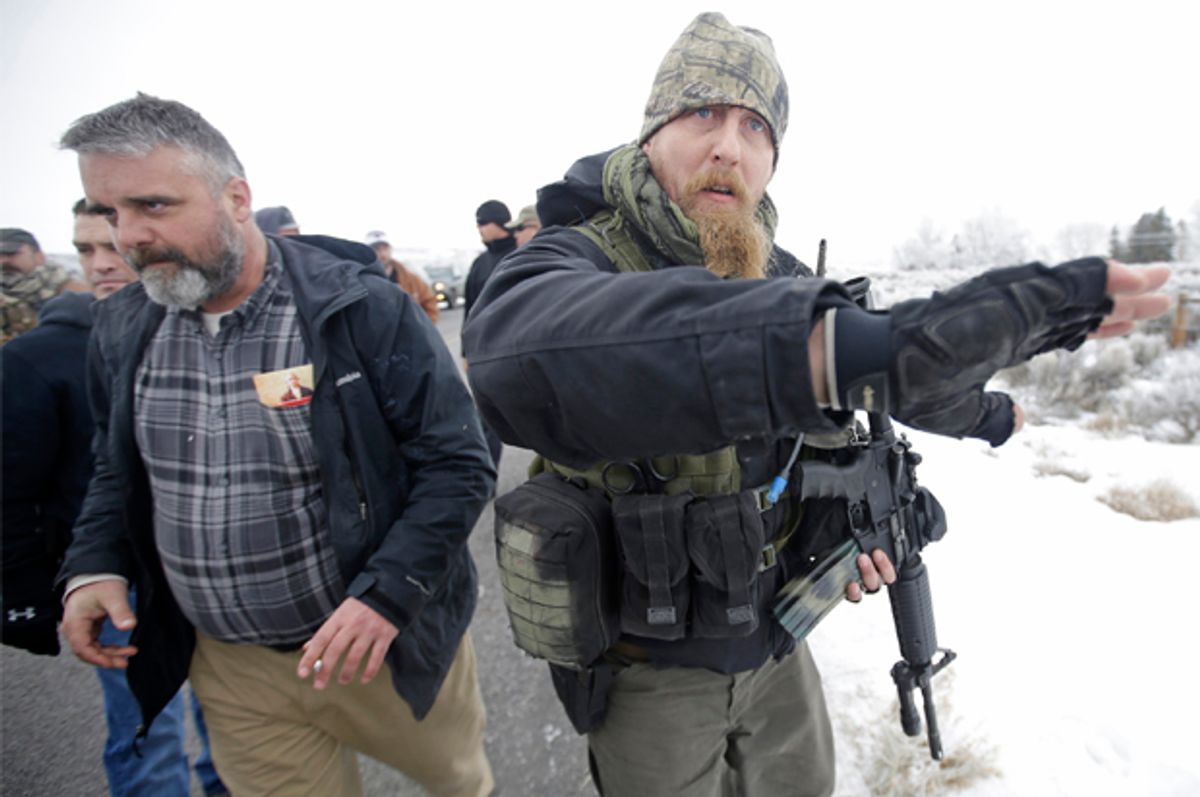 In the wake of an armed standoff with federal and state agents, members of an Oregon "militia" continue to occupy Malheur National Wildlife Refuge for a 26th day as their compatriots and sympathizers spread wild conspiracy theories to make martyrs out of the group.

Robert "LaVoy" Finicum, has been identified as the only person killed in Tuesday's night standoff with the FBI. According to "The Oregonian," a group of militiamen was pulled over on their way to a community meeting and officials said Finicum, 55, failed to obey orders to surrender. Eight other militiamen were arrested.

In a statement, the FBI and Oregon State Police said that they had established checkpoints along key routes to the refuge and that anyone who tries to travel inside would be arrested, although several other members of the right-wing group remain on federal property.

Reacting to news of the standoff and Finicum's death, supporters of Ammon Bundy's wayward revolt called for the "the resolve for principled liberty" to go on:

The resolve for principled liberty must go on.America was fired upon by our government and one of liberty's finest...

Other supporters have taken to wild conspiracy theories in reaction to news of Finicum's death:

Levoy Finicum was Shot and murdered in Cold blood today in Burns Oregon by the FBI and State Law enforcement. He had...

"He was on his knees with his hands up and they shot him," the group's resident IT guy told followers on a livestream today, pushing a story that was debunked by multiple witnesses.

The conspiratorial right-wing website Infowars also pushed this theory, publishing an "eyewitness" account from a woman who claims to have been riding in the same car as Finicum:

[Victoria] Sharp claims that Finicum put his hands out of the car window and asked the police to allow the women to leave the car.

“They shot at him, but they missed him,” said Sharp, adding that the group then attempted to drive away in the car but were shot at again by police.

“When we crashed and stopped for a second, he got out of the car, he had his hands in the air, he’s like ‘just shoot me then’….and they did, they shot him dead,” said Sharp.

“He was just walking, with his hands in the air, I swear to God, and they shot him dead and after he was down on the ground, shot him three more times,” said Sharp, adding that the vehicle was again “bombarded with bullets” as well as tear gas rounds.

The notoriously incorrect conservative blogger Jim Hoft reported on his "Gateway Pundit" site a similar conspiracy from Ammon Bundy's father, Cliven: "LaVoy Finicum was murdered. Cold-blooded murder. They shot him with his hands up.”

Finicum's daughter also claimed in a Facebook post that her father's hands were in the air when he was shot:

I want the world to know how my father was murdered today. His hands were in the air and he was shot in the face by the American authorities. Ammon Bundy reported there are 6 witnesses to this evil.

Breitbart editor Ben Shapiro protested law enforcement's reaction to the nearly months long illegal occupation, writing that "it is worth noting the selective aggression of the federal government here":

The Hammonds aren’t a national issue because they’re ranchers fighting the Bureau of Land Management, not blacks in Ferguson fighting the “white establishment.” The Bundys claim that LaVoy Finicum “had his arms in the air” when he was shot, but there will be no mass movement, no protest photos on CNN -- an ironic counterpoint to the national movement that sprang up in the aftermath of the fully fictionalized account of thug Michael Brown’s death at the hands of Officer Darren Wilson in Ferguson.

Nevada GOP lawmaker Michele Fiore -- the woman who sent out delightful Christmas cards last year illustrating every member of her family toting a firearm -- also pushed the "hands up" theory:

Fiore's right-wing rabidness was upstagged, however, by her fellow Nevada lawmaker. Republican Assemblywoman Shelly Shelton bizarrely compared Finicum to Jesus and Moses in a Facebook post mourning his passing.

“For any who feel he was a criminal, like those who felt Moses and Jesus were criminals, I would implore you to investigate the peaceful work that Lavoy did in his life from the Bundy Ranch where thousands protested without a shot fired, to today in Oregon, where the shots fired came from the government at an unarmed Lavoy Finicum,” Shelton wrote:

In any given generation there are men who are willing to stand for what they believe. Most of the time they are...