Trump wins again with his bratty tantrum: His Fox News debate boycott will only boost his campaign even more 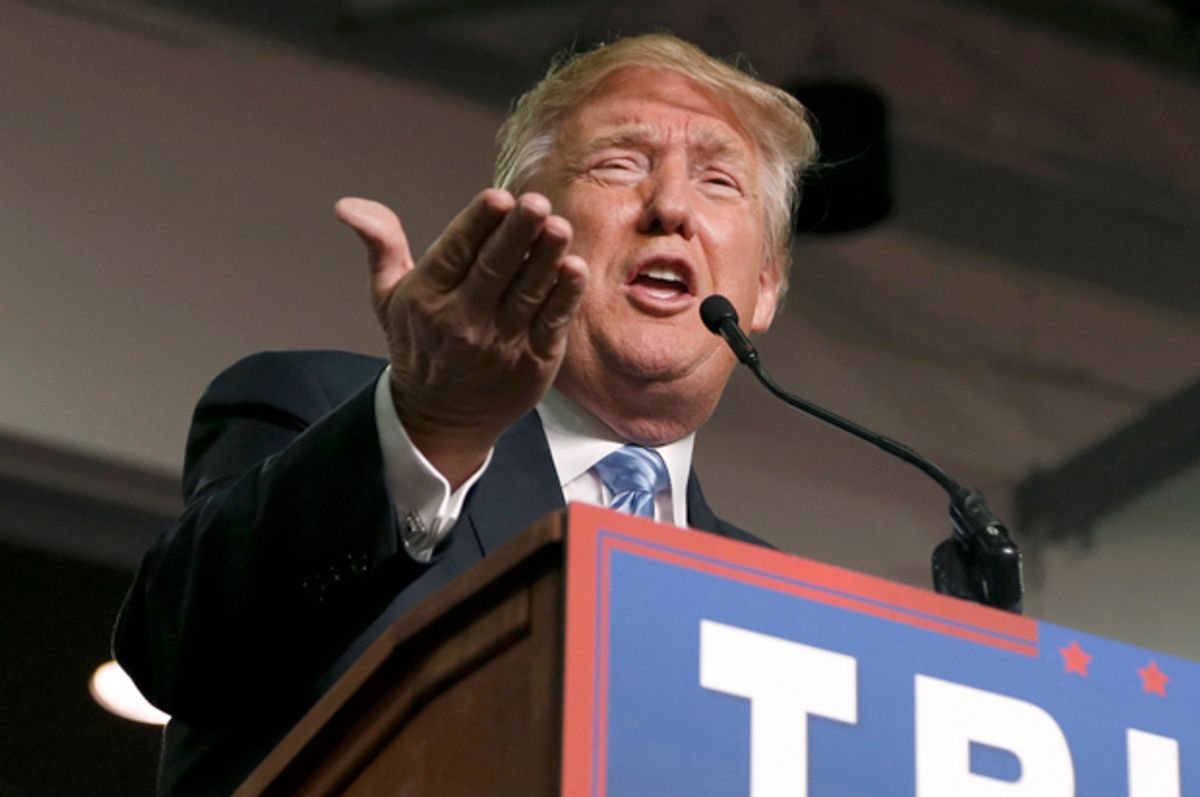 Will Donald Trump's latest stunt — skipping the upcoming Fox News debate on Thursday because Megyn Kelly is moderating — be the thing that finally destroys his candidacy? Hopefully we've all learned by now,  after countless predictions that this horrible event would be the one to cause a Trump flameout, not to get too excited about the prospect of the right wing base turning on Trump. That was the prediction the first time Trump went after Kelly for her unwillingness to kiss his ring, and it only led to the first of many outrage-spurred surges in the polls for Trump.

There's no reason to think that picking a fight with Fox News, even though it's the preferred network of the conservative base, will be any different this time around. Trump will almost surely emerge as the victor in this fight, losing no support and perhaps even getting a boost in his polls, like he has with every other controversy that was supposed to kill him off.

Conservatives have an almost Pavlovian response these days to any conservative figure declaring himself a victim of media bias. The narrative has even more momentum when it comes to Trump accusing Fox News, because it happens to be true in his case.

Fox News's statement in response to Trump's initial demands that Kelly be removed as a moderator was certainly funny, with the crack about how the "Ayatollah and Putin both intend to treat Donald Trump unfairly," but it also proved Trump's accusation that they are unobjective when it comes to him 100% right.

Fox News probably believed they were the exception to the conservative paranoia about media bias, of course. But the narrative is flexible enough to encompass a new wrinkle, where conservative media is lambasted as part of the larger "elite" media that's biased in favor of the Republican establishment and against the base. In fact, this was proved last week when the National Review released their "Against Trump" issue. Instead of meekly bowing to the greater wisdom of their supposed betters, more base-centered publications like Breitbart turned on the National Review.

Kelly's own reaction basically confirms every right wing suspicion that Fox News is a tool of the Republican establishment that is out to disempower the base. " But the truth is, he doesn't get to control the media," she sniffed on Tuesday night's show. Liberals may eat up Kelly portraying herself as a noble warrior for a free press, but this sort of thing sounds entitled and arrogant to the right wing base that has been feeding for decades on the idea that the press is too powerful. Fox News has played a huge role in convincing the right wing base that it's wrong of journalists to be much more than meek stenographers, at least when it comes to dealing with Republican politicians. So why on earth would they suddenly start embracing the idea of a press that is more aggressive?

To add insult to right wing injury, Kelly then had Michael Moore on her show. Hell, all Trump has to do is circulate this picture: And the case that Kelly is a corrupt pawn of a media that hates the conservative base is made for him, in the eyes of his supporters.

Trump has a couple of other major advantages working for him. For one thing, his supporters are well aware that the man is a narcissistic attention whore (which seems to be part of his charm, for whatever reason). Turning down the opportunity to be on camera will come across as a major sacrifice.

Trump's campaign seems aware of this and flagged it in its press release: "Whereas he has always been a job creator and not a debater, he nevertheless truly enjoys the debating process - and it has been very good for him, both in polls and popularity." Translation: The man will only give up a chance to be on national television for a very, very good reason.

In addition, this is going to be the seventh Republican debate. Debate fatigue is setting in. Having Trump skip this one isn't going to feel like a big deal. Trump's people also highlighted this aspect in their press release, noting that there have "already been six debates". It's hard to argue with the implication that it's beginning to be a waste of his and everyone's time to show up---that the only people who are benefitting are the networks that can sell ad money off the promise that Trump might say something crazy.

Fox News and the other candidates will no doubt try to frame Trump as a coward and a brat. Cruz is already working this narrative, saying, " If he thinks Megyn Kelly is so scary, what does he think he’ll do with Vladimir Putin?"

But there's every reason to be skeptical that this will work. Conservatives conceptions of "strength" and "cowardice" are deeply irrational. The last debate was dominated by candidates trying to prove how strong they are by bragging about who is the most scaredest of all of the scary, scary terrorists hiding under the bed. "Strength" for conservatives is not really about actual bravery or calm under fire, but about bluster.

Under the circumstances, throwing a bratty tantrum and refusing to be at the debate fits into conservative notions of "strength" far more than the alternative, which is showing up and meekly submitting to questioning. Sure, the latter takes more courage in an objective sense, but refusing to show up is more belligerent behavior. And mistaking belligerence for strength is exactly how conservatives roll.

Trump may come across as an idiot, but the past year has proven that he's nobody's fool. Seven debates in, he's found a way to make the increasingly tedious process exciting again — putting himself at the center of the story while he is at it. Odds are, like every stunt he's pulled in the past, this one will work in his favor.