Donald Trump scares the hell out of Fox News: Why his debate boycott really makes the network so nervous

The GOP frontrunner's war with the right-wing cable network has escalated dramatically. Here's what's at stake 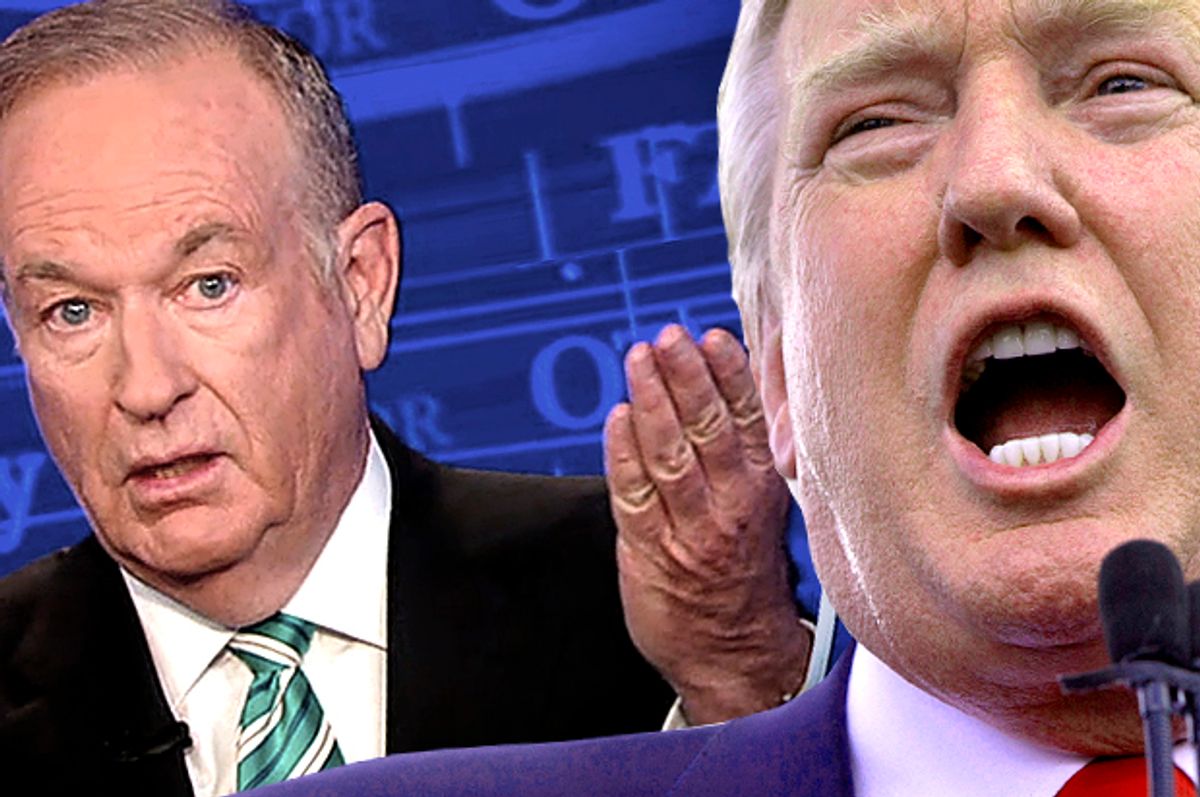 Yesterday Salon's Amanda Marcotte deftly unpacked the latest skirmish in the ongoing Fox News/Donald Trump feud and surmised that whatever happens with the debate tonight, Trump will come out on top. She astutely observed that Trump refusing to debate Megyn Kelly is not seen by his followers as an act of cowardice but an act of courage:

Conservatives conceptions of “strength” and “cowardice” are deeply irrational. The last debate was dominated by candidates trying to prove how strong they are by bragging about who is the most scaredest of all of the scary, scary terrorists hiding under the bed. “Strength” for conservatives is not really about actual bravery or calm under fire, but about bluster.

Under the circumstances, throwing a bratty tantrum and refusing to be at the debate fits into conservative notions of “strength” far more than the alternative, which is showing up and meekly submitting to questioning.

I would just add that in their minds it shows that The Donald is willing to fight anyone even the media behemoth Fox News. For these people, the action is the juice. And Trump is telling them that nobody, not even Roger Ailes, scares him. This is what he said when he announced he would not show:

This whole thing ostensibly blew up because Trump does not like Fox News' brightest star Megyn Kelly and wanted her removed as one of the moderators of the debate. It was made abundantly clear that if Fox kept Kelly on the panel there would be consequences:

In a call on Saturday with a FOX News executive, [Trump campaign manager Corey] Lewandowski stated that Megyn had a ‘rough couple of days after that last debate’ and he ‘would hate to have her go through that again.’

Trump himself had said something similar, claiming ominously adding,“maybe I know too much about her.” This is patented Trump.  Recall that he previously warned Hillary Clinton to "be careful" about ever saying that he was a sexist because he would have to unleash hell on her. (His fans adore his thuggish behavior which they euphemistically refer to as "political incorrectness.")

Trump had good reason to think his threat to not show up at the debate would work. After all, the RNC removed the National Review as one of its sponsors and canceled an NBC debate because the candidates had their feelings hurt by John Harwood and company at CNBC. Trump had every reason to believe that when it comes to debates, "journalistic independence" is a quaint anachronism. But he was asking for the network to humiliate its biggest star, a woman, on his behalf and that was a bridge too far even for network chief Roger Ailes who has benefitted hugely from the Trump phenomenon.

New York magazine's Gabriel Sherman, who has literally written the book on Ailes and Fox and who has impeccable sources within the network, reported that Ailes himself wrote the statement that finally made Trump pull the plug. It was a rather silly satirical note that was apparently meant to yank The Donald's chain. The Donald was not amused.

As of this writing Trump has announced the time and location of his counter-programmed rally and seems to be serious about his refusal to attend. There are dozens of theories as to what his "real game" in all this is. Some say this is an elaborate kabuki dance between Trump and Ailes to boost ratings and they'll mend fences "just in time." Others say Trump is being a typical frontrunner and avoiding the possibility of an unforced error in the last days before the voting.

Neither of these are likely. The first would require that Roger Ailes allow himself to be humiliated as part of the scheme and that's something which people who know him believe would be very uncharacteristic. The second is not Trump's style at all. His campaign is clearly not playing by normal political rules. Indeed, it seems to be determined to explode every norm it encounters. The most likely reason for this is exactly what it seems: Trump doesn't like debating. He's complained about the length of them and threatened to boycott before so his beef with Megyn Kelly gave him a good excuse to get out of this one and dominate the news cycle in the process. And there's nothing Ailes can do about it.

Rush Limbaugh's rather confused rant about Trump's strategy shows how difficult it is for the right wing media to explain this. But after rambling for what seemed like hours, he basically agreed with Marcotte's analysis:

I don't think there's fear, and I don't think it's disrespect for the people of Iowa. This is what it looks like when some guy stands up to the rules and the game and says, "Screw yours; I'm looking out for me first. That's all this is. And you can say whatever you want, but I am not dumb. I'm not gonna give you the gun and the bullet and stand still. You want to hit me, come get me, but I'm not gonna put myself in your line of fire." That's what he's doing, if you ask me.

Rush is saying defying all the rules, looking out for number one and not putting yourself in the line of fire is an act of courage. The new Republican credo.

Trump himself apparently felt that his old pal Bill O'Reilly would be friendly so he appeared on "The Factor" last night.  He and his fellow obnoxious blowhard sparred for a half hour ending up babbling incomprehensibly about milkshakes:

TRUMP: Well even though you and I had an agreement that you wouldn't ask me that, which we did, I will therefore forget that you asked me that, but it's up to Fox, it's not up to me Bill what they did --

O'REILLY: You're actually telling the truth there.

TRUMP: We had an agreement. You actually did break your agreement. --

O'REILLY: You're telling the truth that I said --

TRUMP: I told you upfront, don't ask me that question, because it's an embarrassing question for you and I don't want to embarrass you.

O'REILLY: Right, but I am not going to listen to any political person tell me don't ask me anything. But you're absolutely an honest man, that I said I'll try not to do it, but the milkshake thing just overwhelmed me, but I'm asking you to reconsider it.

TRUMP: A lot of milkshakes.

It sounds as if they were speaking in some sort of code but their demeanor showed it was not a friendly conversation. Trump was angry.

It's unknown at this moment whether Trump will relent, whether he'll go ahead with his fundraiser/rally for veterans (which is being trolled relentlessly by his rivals) or whether this "counter-programming" of the debate will sink Fox news' anticipated ratings. Needless to say, the other networks will be covering Trump --  as I wrote a few months ago, one of Trump's cleverest innovations in this campaign is his savvy playing of the networks off of each other. All we know at this point is that Trump will be in the news regardless.

The Trump phenomenon has revealed the deep and unstable fault lines in the Republican establishment and the conservative movement. This latest episode reveals that conservative media is unstable as well. Talk radio, which has been a pillar of the conservative movement for decades is divided on the question of Cruz and Trump and it's got them practically speaking in tongues as you can see by reading any Rush Limbaugh transcript over the past couple of months. And now Fox News looks as though it's losing its grip.

Republicans know this and are helpless to stop it. Republican strategist and TV pundit Alex Castellanos observed in this note to his email list:

What is the most powerful Republican institution in contemporary American politics? Most of us would admit, “Fox News.” It’s the stage on which Republicans play. Fox is also a news network, of course, and a good one, providing needed balance. The evidence is their ratings. Millions of americans leave their sets turned to Fox as their news source throughout their day.

Primarily, however, Fox is a political platform. It is the Republican Party in the electronic world. National Review and William F. Buckley created the platform in the age of print, an ideological rolls royce for conservative elites. Since then, the world has been connected and democratized by new technologies. Now, Fox is the Republican Party for the masses, a gop hyundai with extra cup holders and synthetic leather. It’s conservatism for screens instead of pages.

We could say Fox’s power is undeniable, but this week, undebatable may be a better word. Most Republican candidates kneel before it, supplicants hoping to sip airtime from its chalice.One GOP candidate doesn’t. Donald Trump has informed Fox News he does not need their debate and won’t attend. Trump has dismissed Fox News like ashes from a fine cigar. It’s a display of confidence and strength.

I doubt Trump’s boycott will be received, as some suspect, as a petulant candidate ducking a debate. Who believes Donald Trump is afraid? Instead, they see Trump confidently taking a risk no other Republican would consider.

It's nice to see a conservative admit that Fox has always been a right wing propaganda machine and Republican house organ. At least we don't have to argue about that anymore. But Trump's "act of courage"  is showing that yet another major conservative institution is not all-powerful after all. If he succeeds in making tonight's debate an undercard event simply by refusing to participate will Fox ever be taken as seriously by conservative voters -- and Republican politicians -- again?