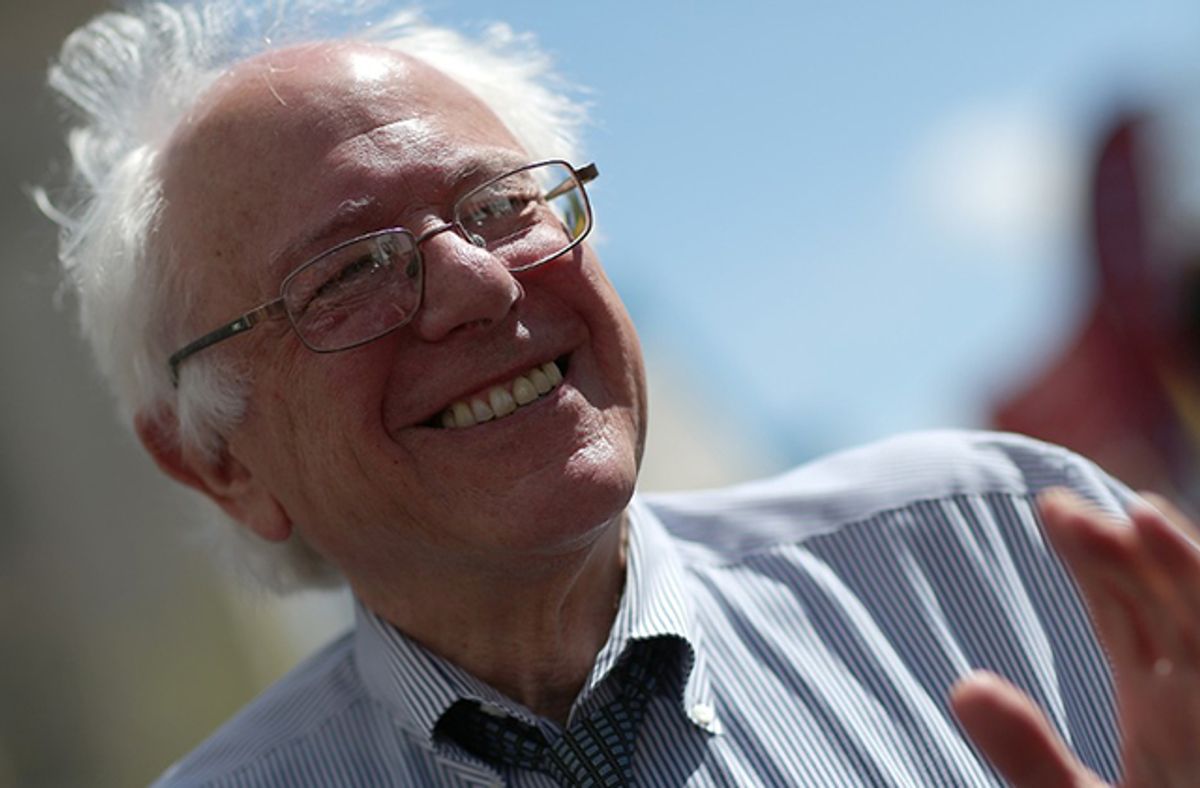 Bernie Sanders has already done a bang-up job of showing that the word "socialist" isn't the political death knell that it used to be assumed it must be. Could he do the same for the non-religious?

"I am not actively involved with organized religion," Sanders told the Washington Post on Wednesday.

“I think everyone believes in God in their own ways,” Sanders, who is Jewish and went to Hebrew school when he was young, continued. “To me, it means that all of us are connected, all of life is connected, and that we are all tied together.”

As Ben Mathis-Lilley at Slate points out, this is not the first time that Sanders has provided an "elliptical" answer on the subject of religion. When asked about God by Jimmy Kimmel, Sanders deflected, saying, "what my spirituality is about, is that we’re all in this together."

The whole thing is quite fitting with Sanders' larger campaign argument that the United States is ready to be more like western Europe. When he invokes countries like Denmark, Sanders is generally speaking about economic policy and the social safety net, but it's also true that his attitudes towards religion are similar to what you'd find in countries like Denmark or the Netherlands, where a lot of people have some nominal faith but aren't really church-going believers.

It's long been believed that such an attitude is a non-starter in American politics, however, where it's assumed that people are a lot more churchy than our western European counterparts. Certainly, most mainstream politicians, particularly those with eyes on the White House, are not only religious but are members of traditional churches that hold standard-issue Christian beliefs: That Jesus was a real person, that he was literally born of a virgin, etc.

Already Sanders is outside of that norm, simply by being Jewish. But if he held more traditionally Jewish beliefs, that would fit into the long-standing expectation that national politicians kow-tow to the American belief in their own religiosity. Rejecting organized religion, however, is a bold choice.

That said, Sanders may be more in line with where Americans are actually at when it comes to religion than what long-standing stereotypes about America religiosity would have you believe. Which is to say, Americans aren't nearly as religious as we think we are.

The Pew Research Center of Religion & Public Life routinely polls Americans on religious belief, and in recent years the number of Americans who claim to have no formal belief system has risen dramatically.  Nearly 23 percent of Americans have no religious affiliation. Most of those people have beliefs that are similar to the sorts of things Sanders has been saying: They aren't atheists, but they also don't really subscribe to the teachings of an organized religion.

But even the Pew research may be overrating the levels of belief in American society. Telling the Pew researchers that you are "Catholic" or "Protestant" could be little more than a cultural signifier for many Americans, and not a suggestion that they actually darken the doors of the church they claim to be affiliated with.

It is true that Americans say they go to church a lot. But they are lying, to be blunt about it. Once you get past the level of a phone survey and start recording people's actual behavior, it turns out that a whole bunch of those people who claim they go to church do not actually do so.

Shankar Vedantam of Slate reported on this phenomenon in 2010:

Beyond the polls, social scientists have conducted more rigorous analyses of religious behavior. Rather than ask people how often they attend church, the better studies measure what people actually do. The results are surprising. Americans are hardly more religious than people living in other industrialized countries. Yet they consistently—and more or less uniquely—want others to believe they are more religious than they really are.

In other words, when it comes to what we actually do, we're a lot more like western Europeans than we think we are.

The showy religiosity of politicians only reinforces this illusion of American churchiness. But that insistence that politicians make a big show of performing faith for the public has finally started to loosen its grip a little, as least for Democrats. While the Obamas were prominent members of a church in Chicago, the President and his family haven't joined a congregation in Washington D.C. and don't seem too bothered by it. Once in a great long while, they'll go to services, but by and large they use their Sunday mornings for other activities.

This refusal to make a big public fuss over faith has not gone unnoticed by some. "For a while, this was of great interest to Politico, which published piece after piece after piece about Obama’s church attendance," Steve Benen of MSNBC wrote in February.

"In time, the Beltway media seemed to tire of the story," he added. Perhaps it's because they realized that the public doesn't care as much as the folks at Politico thought they would. Politico was working under the false assumption that Americans are super-religious and put a high premium on it, but in reality, most of us are like Obama: Even if we do go to church, we don't go very much, because it's actually not that important to us.

Sanders might be the next step in the gradual process of Americans admitting that God just doesn't matter to us as much as we've long pretended he should. His admission that he's not really religious has been met mostly with a giant yawn in the press. Even the conservative Christian press is mostly reporting on it straightforwardly, without any of the histrionics you'd expect. The more secular conservative press is ignoring the story completely, suggesting that even they are more worried about the latest Trump cable news drama than they are maintaining a culture where faith is mandatory for mainstream politicians.