There's no beating Megyn Kelly: What Donald Trump should have learned from her Fox News interview with Michael Moore 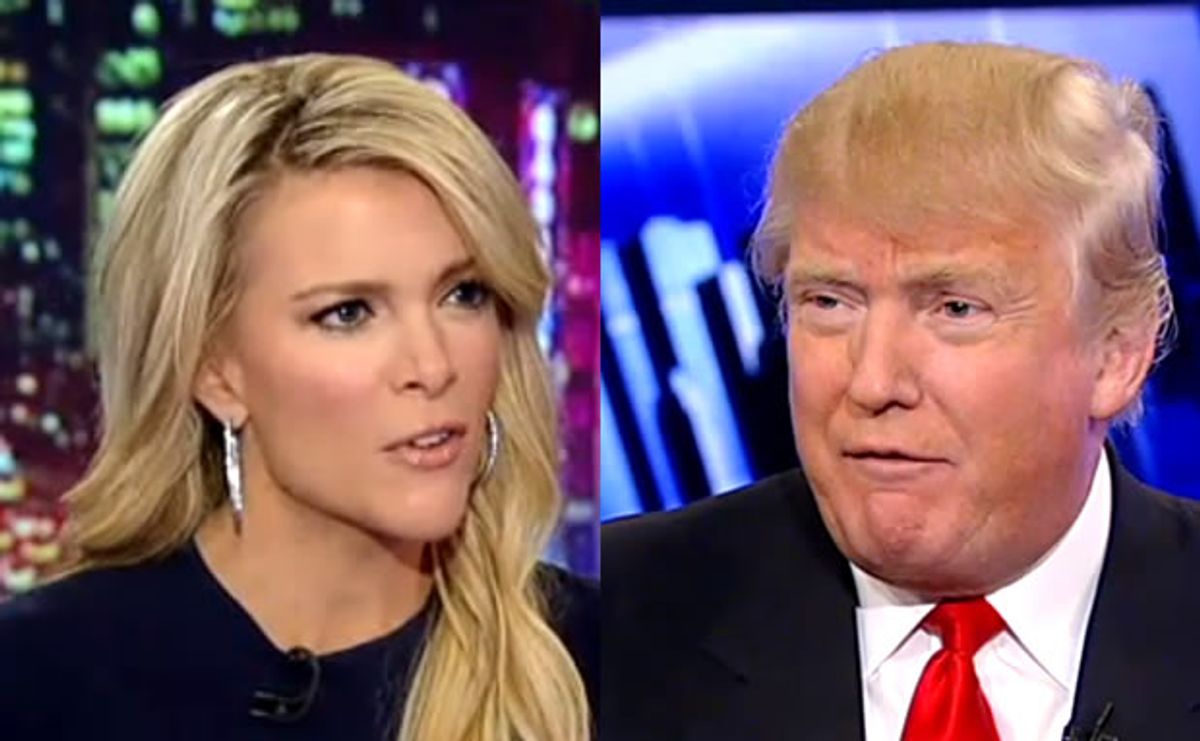 This week in the latest twist on what has already been an extremely odd GOP primary, we learned that front-runner Donald Trump will not participate in Thursday night’s debate on Fox News.  In what might be the final straw in his peculiar political tactics, Trump claimed he wouldn’t join the debate if Fox News commentator Megyn Kelly were a moderator.  He even taped a video saying that he was justified since everyone knew that Kelly was biased against him.

But then it got weirder. Fox News backed Kelly and issued a statement "Capitulating to politicians' ultimatums about a debate moderator violates all journalistic standards.”  This from the network that has the reputation of the most biased, factually inaccurate reporting available on television today.

In addition to Fox News posing as a real news outlet, with serious interest in reporting, they also went after Trump with mockery and snark: "the Ayatollah and Putin both intend to treat Donald Trump unfairly when they meet with him if he becomes president. … A nefarious source tells us that Trump has his own secret plan to replace the Cabinet with his Twitter followers to see if he should even go to those meetings.”

It’s important to pause and digest the absolutely odd conjunction of Fox News blustering about its journalistic integrity and going after Trump with the sort of satirical sarcasm we get on late night comedy treatments of Trump. If you read that statement about Putin and Twitter followers without attribution, you might think that Stephen Colbert had penned it.

This was all the perfect setup for Michael Moore, who entered the circus performance for an interview with Megyn Kelly to promote his new film “Where to Invade Next.”

Moore had made his mark on Fox News when he sparred with Bill O’Reilly in a famous interview back in July of 2004 after the two crossed paths at the Democratic National Convention and O’Reilly decided to have him on his show.  The idea was to debate the claims offered in Moore’s controversial film “Fahrenheit 9/11,” which made the case that George Bush lied to the U.S. public when he launched the Iraq War.

While that interview was legendary, it was nothing like the Kelly interview with Moore.  Moore is an artful interviewee, using his considerable talents as a comedian to move the interviewer off of his or her talking points.  In the O’Reilly interview he kept going back to the key question: Would you send your child to fight in Iraq?

“I would not sacrifice my child to secure Fallujah and … you would?” “I would sacrifice myself,” O’Reilly said.  “Where can we sign him up?” Moore replied, to which O’Reilly responded, “You’d love to get rid of me.”

That exchange allowed Moore to reveal the deep contradictions in O’Reilly’s war-mongering rhetoric.  Eventually O’Reilly is revealed as all bluster, no credibility—which is pretty much the Fox News profile.

But if Bill O’Reilly has been the “papa bear” of Fox News, it is Kelly whom the network sees as its future. With an aging audience, Kelly is the network's one hope of drawing in younger viewers.  Kelly’s style, though, is a hybrid. Her reporting a sort of Frankenstein. At times, she hits hard --with her probing question on Trump’s misogyny at the first GOP debate as a prime example. At other times, she echoes the Fox News idiocy like the time she insisted that Santa Claus and Jesus were white.

Moore’s interview really took her down the rabbit hole, though.

In a tweet setting up his visit Moore referred to Fox News as Beelzebub’s Den and Lucifer’s Lair.  His plan, though, was to enter as an invader, a merciful one, but still an invader.

This, of course, was a reference to his new film, “Where to Invade Next,” which is already being heralded by conservatives as an attack on the nation, more of the anti-American drivel they expect from libtards.

Except, as the interview reveals, those ideas are fictionalizations of Moore, who is about as patriotic as anyone could be. The only difference is that his idea of what would make America great is not the same as that of his so-called patriotic, Tea Party detractors.

His film is as much a love letter to America as any he has ever done.  He visits other nations to “invade” them for good social policies – social policies that in most cases were originally modeled after U.S. ideas. Mocking the militaristic bent of much U.S. politics today, he reverses the trend and turns an “invasion” into a learning expedition.

As he explained during the interview, and as Kelly herself would tweet later, “If you watch my films you will know three things about me: I love this country, I have a heart, and you will laugh.”

The interview, though, did not focus much on the film.  Instead it focused on Moore congratulating Kelly for scaring Trump so much that he ran away from the debate.  He started by saying, “I feel bad for you. What’s he afraid of? I’m sitting here, I don’t feel any fear.” Kelly replied that she was a “pussycat.”

Then Moore played on the idea that Trump was bullying her, but that she had achieved what none of the other candidates could do: She exposed him for the megalomaniacal, controlling fraud he is.  No serious presidential candidate can survive if they refuse to do a moderated debate because they don’t like the journalist on the dais.

But it was what came next that really exposed the hybrid, odd place that Kelly is in as a Fox News reporter.   Kelly wanted to call out Moore for both supporting Hillary Clinton and calling her “disgusting.” It was the sort of “gotcha” that is bread and butter dumb reporting on Fox News. Moore, though, was able to calmly and rationally explain how he could both support her, especially in light of the ways she is so often viciously attacked in the media, and also criticize her for campaign tactics against Barack Obama.

Channeling the sort of “invading” he does in his film, where he is both optimistic and critical, Moore schooled Kelly in political nuance.

The display went on as Kelly called him out for statements critical of Obama. As Moore reasonably explained that he could support the president and also expect more of him, Kelly found herself in the odd role of needing to take a side. So if Moore criticized Obama, Kelly couldn’t just agree with him.  She had to disagree by actually defending him.  When Moore explained he had wanted him to close Guantánamo, Kelly replied, “He tried. You’re tough.”

That’s the thing, though. Moore is anything but tough. The interview showed his genuine warmth and congeniality. But in the land of Fox News you are either all in or at war.  Kelly’s interview tactics simply couldn’t handle the idea that you could have complex opinions about a candidate.

And it also meant that she varied from being tough on Moore and charmed by him.  The back-and-forth she went through was delicious to watch because it showed how Kelly herself is caught between being a reasonable, smart journalist and being a Fox News pitbull.

Moore’s smartest move, though, was to also refuse to pretend that Fox News itself isn’t a major player in GOP politics. As the interview was winding down, he made sure to make an important intervention: “To get elected president in this country, you have to come on this network, you have to play ball with this network. Donald Trump today said, ‘I'm not playing ball with this network.’ That’s historic, and it will be interesting to see where the real power is.”

“You’ve made this happen,” Moore told Kelly. “You caused a crisis upstairs here.” It all made Kelly uncomfortable, leading her to say she had only asked a question. But Moore wouldn’t let her play it down: “You asked a great question, by the way! The war on women!”

“Now you’re really ruining my rep, I’ve got to get out of here,” Kelly said with a laugh.

The thing is that Moore did a lot more in his interview with Kelly than ruin her rep.  He revealed the odd place she has found herself in as both the mouthpiece for reductive, binary, reactionary, right-wing thinking and also the voice of reason on a channel dominated by angry, white men. And that’s why we should all be asking where Michael Moore plans to invade next.