You, me & this ho-hum show: "Apocalypse" comedy has Rob Lowe as a smarmy priest going for it — and not much else

Not even Megan Mullally as a white supremacist prison inmate could save "You, Me & the Apocalypse" 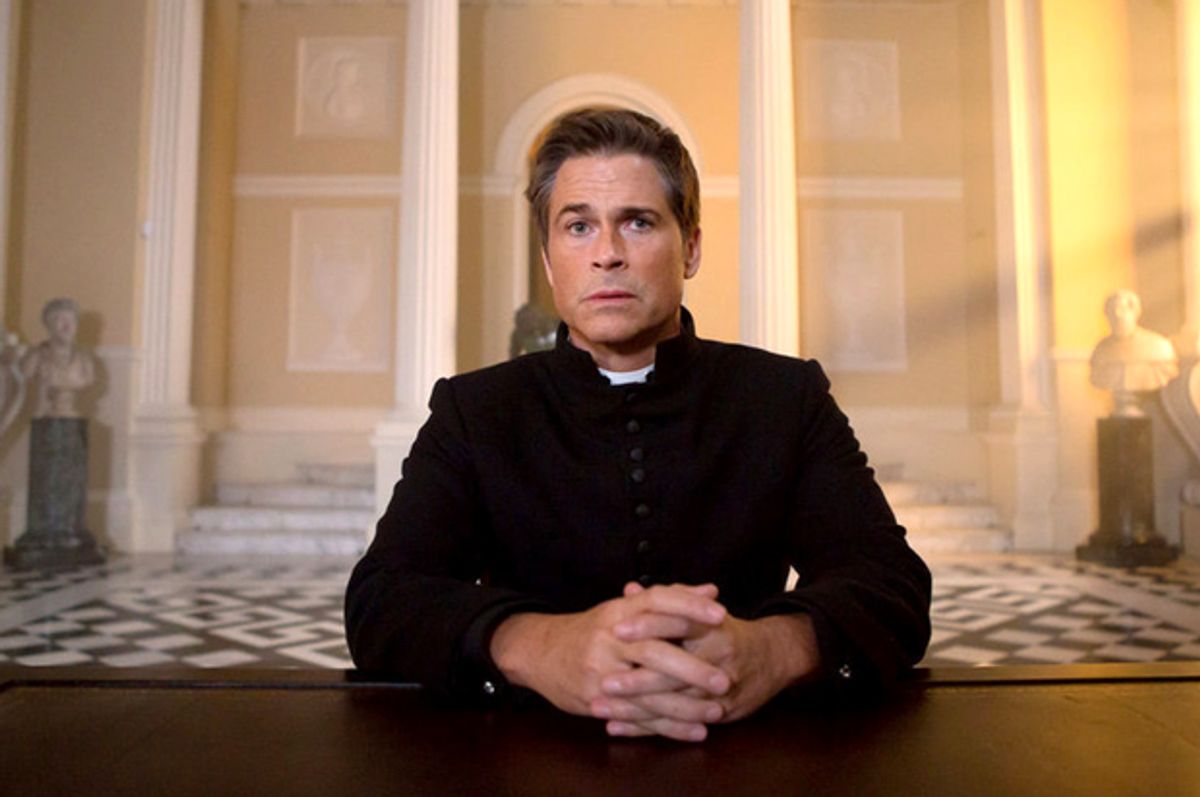 Rob Lowe as Father Jude Sutton in "You, Me and the Apocalypse" (NBC/Ed Miller)
--

The good news is that Megan Mullally plays a basically unrecognizable redneck convict named Leanne with a swastika etched into her forehead. It’s a very convincing transformation, either because Mullally’s done something drastic to her eyebrows or because her hair is a stringy blonde mop for the role. As Leanne, she’s an element of chaos, by turns malicious or benign. In the four episodes I watched of “You, Me & the Apocalypse,” it’s entirely unclear why she’s chosen to help Rhonda (Jenna Fischer), a rather pathetic librarian taking the fall for her son’s cyberterrorism. But it is kind of fun to watch Mullally just get to be Mullally, in all of her scene-chewing glory. As is the wont of any character played by Mullally, Leanne ends up running into a lone weirdo played by Nick Offerman. One is wearing a dress with faux pearls; the other a police uniform. The two share barbed observations about rednecks.

The bad news is nearly everything else about “You, Me & the Apocalypse,” a British-American comedy miniseries lacking an understanding of the Oxford comma that debuts Thursday night on NBC. The 10-part series is the kind of layered sequential story that British comedy excels at, but is a bit too drawn-out and American to feel truly brilliant. Instead it’s a slow-moving farce with erratic tone shifts into Catholic existentialism, mother-son pathos, and anxiety about the military-industrial complex, I guess, with a side of British actors putting on very bad American accents and the blandest actor in the ensemble playing not just one but two characters.

Yes, this is the type of story that has long-estranged twins coming into each other’s lives, and of course, one of them is evil; the pair, played by Mattew Baynton, are both necessary for the plot to move forward and interminably boring. He’s at the epicenter of butt jokes, loser jokes, and ugly jokes, none of which are particularly funny, even if Baynton himself is winsome enough. But if he’s weak as a protagonist (and antagonist), it’s because the whole show struggles to hold itself up around him. For some reason, “You, Me & the Apocalypse” is an hourlong drama, not a half-hour comedy, and the long episode runtimes kill any sense of momentum or fun the show can muster up. It turns a dark comedy into poorly done tragedy, which is particularly unappealing for a show that is about the end of the world.

The show follows a dozen or so people who are trying to make it through the last month of human existence, following the announcement of a comet’s impending impact with Earth. It creates a lot of panic, but mostly that’s just useful material for the twists and turns of the plot. Inmates break out of prison; anything that can be looted becomes fair game; false prophets gain Facebook followings. It’s an intriguing world, and some of the glimpses of humanity at the brink of doom are the most innovative the show gets. But weirdly, for a show with a built-in apocalypse, it’s really hard to care about almost all of the characters' well-being. Baynton is a dud, Mullally’s playing a white supremacist, and Fischer’s role puts her in a matronly, unfunny position. In the fourth episode, she ends up escaping a locale wearing just a bathrobe and bedroom slippers—marking the first moment where she looks just as out-of-place as she seems. (Fischer has yet to find the role, post-“The Office,” that really speaks to her strengths; this, unfortunately, is not it.)

There is another show inside “You, Me & the Apocalypse” that’s worth watching, and it takes place, weirdly, in Rome, where a priest (Rob Lowe) and a nun (Gaia Scodellaro) play devil’s advocate to the entire world, hunting out pretending saints and false miracles. Perhaps because of the played-up romantic tension between the two celibates—and the genuinely creepy nature of what they’re investigating, whether that’s testing the limits of human divinity or human greed—the pair’s mini-adventures in the Vatican City make for the most interesting material in the miniseries. Lowe is all smarm and secrecy in his role as the Catholic church’s resident black sheep, while Scodellaro is the wide-eyed newcomer with her own rock-solid faith and intuition. Perhaps I’m reading a little into it, this little side adventure that feels like “The X-Files,” but with miracles and the church. But I’d certainly rather watch a 10-episode miniseries about that.