Even without Donald Trump, the GOP debate was fixated on how Americans must live in fear of ISIS

Despite Trump sitting this one out, Republican candidates competed to see who could get weirdest about ISIS 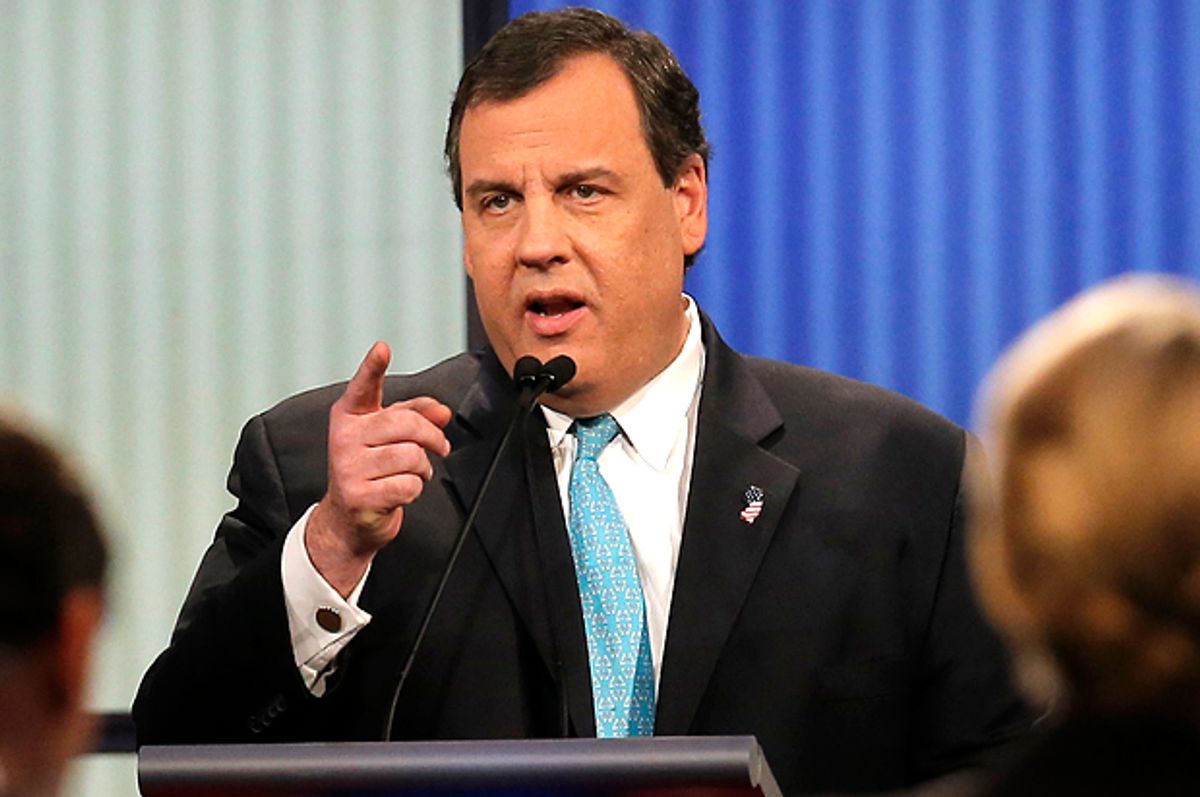 Most of the candidates in the seventh Republican debate, on Fox News, went with the "ignore Trump" strategy to handle his obnoxious (but hilarious) boycotting stunt. But even without him in the room, it's clear that Donald Trump is still controlling the terms of the Republican primary. As with the last debate, this debate quickly devolved into a contest over who could beat Trump at the game of stirring up the most hysteria about the scary Muslims that are coming to destroy the humble Christians that Republican voters imagine themselves to be.

Trump, with his proposed ban on Muslims coming into the country, set the bar ridiculously high when it comes to pandering to the hysterics and the bigots. None of the other candidates were willing to go that far, but they did try to make up for it by being the most belligerent and stoking the most irrational fear.

Chris Christie and Marco Rubio, in particular, tried to turn every topic to the issue of how ISIS is coming to get you, probably tonight and probably by sneaking in through the air ducts.

When asked about his history of changing positions on immigration, Rubio deflected as quickly as he could and pivoted to the question of ISIS. "No. 1, we're going to keep ISIS out of America," he intoned gravely.

"If we don't know who you are, or why you're coming, you will not get into the United States," implying that the current immigration policy does not bother itself with such questions. (In reality, the kind of visa or green card status you get depends entirely on things like "who you are" and "why you're coming.")

Christie pulled a similar trick when confronted with an uncomfortable question about Kentucky county clerk Kim Davis, and statements he made suggesting, heaven forbid, that bigots shouldn't have unilateral authority to deny gay people constitutionally protected rights. After arguing that he never actually said she should have to do her job, he pivoted to, you guessed it, ISIS.

The radical Islamic jihadists, what they want to do is impose their faith upon each and every one of us -- every one of us. And the reason why this war against them is so important is that very basis of religious liberty.

They want everyone in this country to follow their religious beliefs the way they do. They do not want us to exercise religious liberty. That's why as commander in chief, I will take on ISIS, not only because it keeps us safe, but because it allows us to absolutely conduct our religious affairs the way we find in our heart and in our souls.

It's true that ISIS wants to force the rest of the world to live by its fanatical interpretation of Islam, I guess. But that's like saying Richard Dawkins would like everyone to give up religion altogether: Technically true, but utterly irrelevant. Does Christie actually think we're in real danger of having our religious liberty stripped as we're forced to live in a medieval caliphate? Is he really worried that we're just a couple of foreign policy missteps away from American churches being forcibly converted to mosques? Does he think his daughters are in real danger of being forced to marry ISIS fighters?

The worst part of this is Christie's dog whistling of the bizarre but widespread "sharia law" conspiracy theory still couldn't compete with Rubio's unhinged attempts to convince the voters that the streets are practically overflowing with ISIS fighters as we speak. For instance, this bizarre moment:

Look at the attack they inspired in Philadelphia, that the White House still refuses to link to terror, where a guy basically shot a police officer three times.

He told the police, "I did it because I was inspired by ISIS," and to this day, the White House still refuses to acknowledge it had anything to do with terror.

That's because the man in question, Edward Archer, is not an ISIS fighter. He appears instead to be a mentally ill man, probably schizophrenic, whose mother says he has been "hearing voices in his head". Suggesting he's a member of ISIS is like calling the mentally ill homeless woman who yelled sexual suggestions at me the other day my boyfriend.

All two hours of the debate went down like this, with Ben Carson suggesting we're in danger because we're "allowing political correctness to dictate our policies" and Rubio calling ISIS "the most dangerous jihadist group in the history of mankind", a bit of rhetorical trickery that allows him to imply they're scare than, say, Nazis, while maintaining some kind of plausible deniability.

There's a lot of reasons for this ridiculous rhetoric, of course. Republicans have long been fans of the "vote for me or we're all going to die" gambit, as anyone who lived through the Cold War can attest. But the over-the-top silliness is surely due in no small part to Donald Trump. He saw his poll numbers spike by embracing open bigotry against Muslim last month. Now the rest of the candidates feel they have to hustle, and hard, for those voters who believe, or at least enjoy pretending to believe, that we're in imminent danger from a widespread jihadist invasion and that you can't trust anyone with an Arabic last name or who wears a hijab.