Everything you need to know about last night's excruciating GOP debate

While Donald Trump stuck to his Fox boycott, the other GOP candidates got down to business. It was, in a word, bad 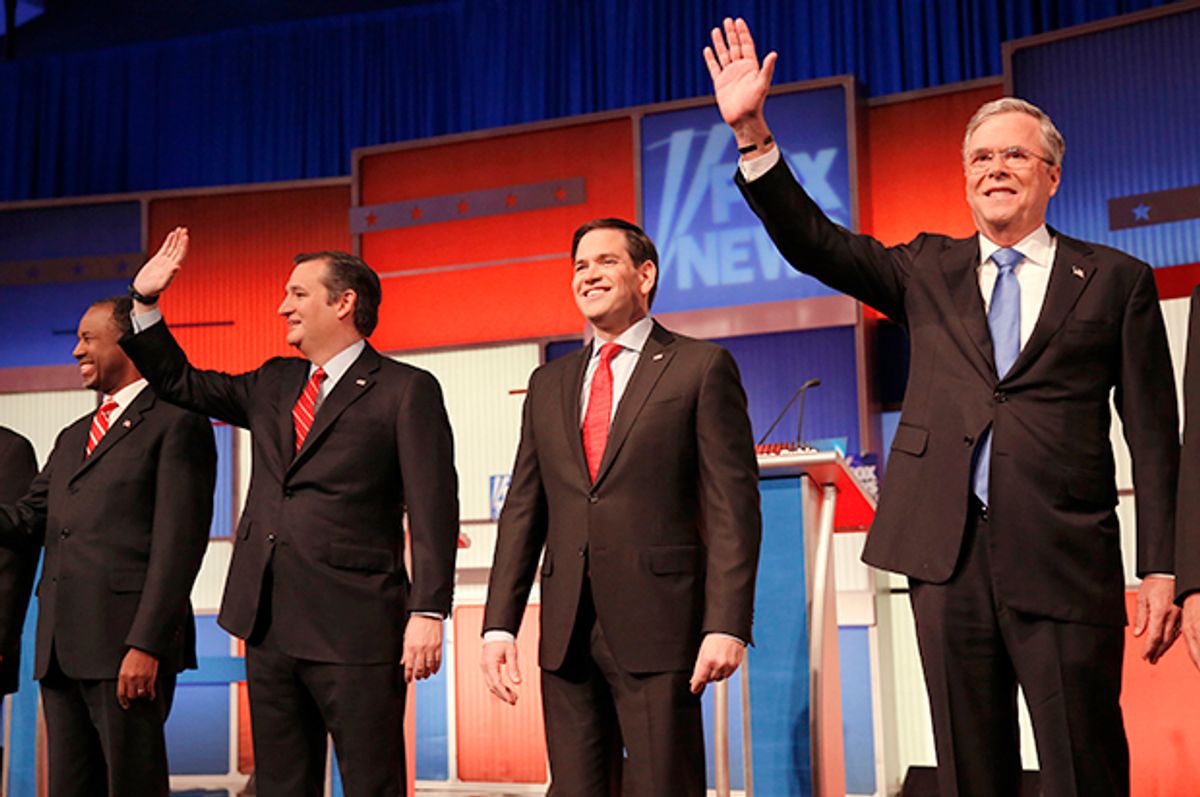 Some good news came out of the GOP presidential debates last night. It dawned on everyone watching that in a week or so this field is going to be winnowed considerably and we will never have the thrill of seeing the seven dwarves -- Grumpy Christie, Sneezy Cruz, Happy Kasich, Sleepy Carson, Dopey Rubio, Bashful Bush and Doc Paul -- on a stage together again. (Snow White Trump was pouting across the street, upset over having to take questions from Megyn Kelly.)

Trump did manage to dominate the news all day as usual while the whole political world excitedly speculated as to whether he would sweep into the debate at the last minute like a diva high soprano or if his alternative rally would upstage the main event. Just as the debate was about to begin he invited CNN onto his luxurious private plane to explain that Fox had profusely apologized for their bad behavior ("they couldn't have been nicer") and had begged him to come to the debate. He wished he could but he'd promised to raise money for the veterans and couldn't let them down.

Fox News has a different version of events, claiming that there was no apology and that Trump had shaken them down agreeing to appear with the hated Kelly but only if the network would promise to pay $5 million to his veterans charity. They refused to "negotiate" any further.

His event was a dull affair but the other networks covered it nonetheless. They always do. The bright spot of the night was when Mike Huckabee and Rick Santorum, both previous Iowa caucus winners, raced over from the kiddie table to lend their tacit support to Trump. The pundits saw this as a major development for some reason, as if their endorsement was a meaningful symbol of something, but nobody seemed sure of what it might be.

Trump raised millions from himself and some other millionaires and smaller donors for the veterans, "who he loves." Curiously, the money all went to donaldtrumpforvets.com, a website set up that morning which routes the money to the Donald Trump Foundation. One assumes he means to send it on to veterans groups but as of last night, the press was unable to confirm that he had contacted any of them. Anti-Trump right wingers are up in arms that this foundation has donated to the Clinton Foundation in the past which apparently means this is a nefarious deed of some sort.

Truth be told, it was little different than the rallies he puts on every day. The master showman was apparently unable to put together an entertaining spectacle on such short notice. But that is not to say the rival event was any more exciting. The seven dwarves dully sparred over the course of a couple of hours but the usual energy was lacking. Cruz started off strong with a carefully prepared funny:

"I'm a maniac, everyone on this stage is stupid, fat and ugly. And Ben, you're a terrible surgeon. Now that we've gotten the Donald Trump portion out of the way..."

He does try to have a sense of humor. But he was unable to keep his poise as his frontrunner status made him the target of his fellow candidates as well as the moderators. Taking a page from his CNBC debate complaint book he said, "I would note that the last four questions have been: Rand, please attack Ted. Marco, please attack Ted. Chris, please attack Ted," to which Chris Wallace dryly retorted,"It is a debate, sir." Cruz managed to recover with a brittle little joke: "If you guys ask one more mean question, I may have to leave the stage." Unfortunately for him, if Twitter is any example,a great many people cannot tell when Ted's cracking wise and they thought he was being serious.

Jeb Bush, on the other hand, was on fire. Well, he had a nice little glow about him anyway. Freed from the burden of having to fend off Trump's insults, he was able to sound almost ... confident. He started off with a clever little jab at his fellow candidates:

"I kinda miss Donald Trump. He was always a little teddy bear to me. We always had such a loving relationship… Everyone else was in the witness protection program when I went after him."

I'm not sure saying he had a "loving relationship "with Donald Trump was such a hot idea, even in jest. It's just weird. But that's Jeb! He also droned on about his "proven record" over and over again and tried to sound as hawkish as the rest of the bloodthirsty crowd with a startling comment: "Get the lawyers off the damn backs of the military once and for all," which can only be interpreted to mean that as president he would authorize war crimes. He's a real Bush, after all.

All in all, it was Jeb's best debate. It might even boost him up to 5th place.

Many of the pundits seemed to think that it was also a good night for an oddly rosy cheeked Marco Rubio, who appeared to have guzzled a couple of double espressos before he took the stage and breathlessly answered every question with his patented rapid-fire machine gun delivery. And he was excessively pious, mentioning his faith more often than the Pope did during his recent U.S. visit. But he was also the most bellicose of the group insisting that ISIS is one of the greatest threats in human history and any fighters he captures alive in the U.S. will immediately be shipped off to Guantanamo. It's hard to know what issues he feels most passionately about because he gives every answer with exactly the same frantic emphasis. One can't help but worry he'll end up having a heart attack as president if he doesn't mellow out a little bit.

But it was Chris Christie who really went the extra mile. When asked about his heretical opinion that Kentucky county clerk Kim Davis should be required to do her job, he digressed to a bizarre defense of "religious liberty" that could have come out of the 12th century:

You know, we all have our own individual interpretations of our faith. And here's the problem with what's going on around the world. The radical Islamic jihadists, what they want to do is impose their faith upon each and every one of us -- every one of us. And the reason why this war against them is so important is that very basis of religious liberty.

They want everyone in this country to follow their religious beliefs the way they do. They do not want us to exercise religious liberty. That's why as commander in chief, I will take on ISIS, not only because it keeps us safe, but because it allows us to absolutely conduct our religious affairs the way we find in our heart and in our souls. As a Catholic, that's what I want to do. And no matter what your faith is, that's what I want you to be able to do.

In one of the earlier debates, Christie said we were already in World War III. Apparently we are also engaged in the People's Crusade Part II.

Meanwhile, John Kasich is allegedly coming on strong in New Hampshire, so the GOP establishment is turning its desperate eyes to him. He seems to think that all the problems in the Middle East (and everywhere) are caused because the people involved don't understand the nature of the challenges they are living with. He believes once he explains it to them they will be able to fix everything without further ado. He also says he will explain to America's allies that we need them to be allies. Someone should have thought of this sooner.

Finally, the principled libertarian Rand Paul stood strong against a woman's right to own her own body and said that while he believes fervently in states' rights he had introduced a bill called the Life at Conception act "which would federalize the issue." But until that happens he would settle for the reversal of Roe v. Wade and some states banning abortion. Then he accused Ted Cruz of hypocrisy on immigration.

Ben Carson was rumored to be on the stage as well.

Some commenters said afterwards that this was the campaign they'd all been hoping for. Without the vulgarian Trump, these candidates were able to hold a substantive debate. Unfortunately, all it really did was show the entire country that the GOP's vaunted deep bench was no more serious without Trump than with him. They were just duller.

The debate was co-sponsored by Google, so they were offering up all kinds of online data throughout the program. This one told the tale:

He didn't even have to show up to win it.

None of the Fox moderators asked any of these contenders why so many GOP voters love a frontrunner who cares not at all about conservative ideology. They undoubtedly know that the answer isn't something they want to hear.