Marco Rubio's big night all for naught: The gains he made with conservatives during debate are meaningless thanks to Trump

Rubio's debate performance Thursday was tailored for conservatives, but it likely won't translate into many votes 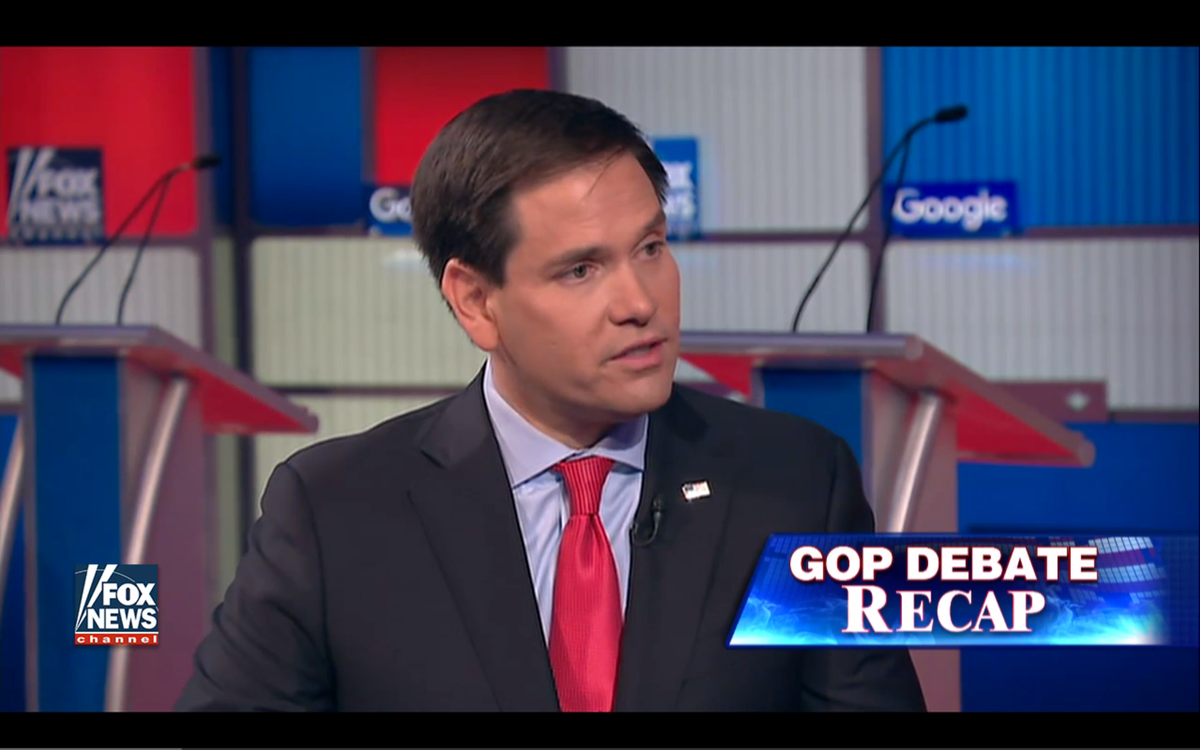 The big question hanging over Thursday night's debate on Fox News was who would benefit the most from the yawning absence of Donald Trump from the proceedings. Ted Cruz clearly thought it was going to be his night, and even went so far as to portray himself as the replacement Trump, but having more breathing room just gave him more opportunities to remind viewers that he's that guy you warn your friends to stay away from at parties.

No, the night went to Marco Rubio, who successfully used the Trump-less atmosphere to distinguish himself from the other candidates. Sure, to ordinary people, Rubio came across as an imbecile and a bloodthirsty monster — he was going to make sure you know how much he loves the idea of torturing people at Gitmo — but it's important to remember that he's trying to win over Republican voters, for whom neither sadism nor idiocy really rank as flaws in a candidate. This was a debate where a moderator literally suggested that it's acceptable, necessary even, to call 911 every time you see a Muslim person walking around, and no one seemed especially ruffled by it. Being a huge jerk is an asset with this crowd.

Without Trump on the stage, the candidates had two missions: To show voters they aren't intimidated by Trump and to present themselves as an attractive alternative. Rubio succeeded on both counts. Of the viable candidates on stage, he was the only one who didn't seem to even notice Trump's absence, which helped make him look unflappable.

That impression was only underscored by his performance on the immigration question. At first, it seemed surprising that Fox News, which has every reason to fluff up Rubio's chances, would chase after him so hard on the immigration question, even going so far as to play video clips suggesting that he's been all over the place on this issue. But perhaps they knew he could handle it as well as he did, and that he would end up looking like someone who could bear up under hard questions about it.

Because really did play the whole thing well. After an initial bump where he got fussy with Megyn Kelly about the difference between "amnesty" and "blanket amnesty", he was able to swiftly pivot, portraying himself as a hard ass, implying that ISIS is somehow hiding terrorists in with undocumented immigrants, and deftly using his parents' status as legal immigrants to bolster resentment against those who come here without proper documentation.

More importantly, Rubio was able to successfully portray his biggest opponents, Jeb Bush and Ted Cruz, as even more fickle and driven by political considerations than he is. While Bush tried to make the "cut and run" line stick to Rubio, Rubio won the spat by mentioning Bush's book on immigration: "That's the book where you changed your position on immigration because you used to support a path to citizenship."

Bush's lame "So did you" response played right into Rubio's hands, sending home the message that his finagling on this issue is standard for all politicians, and not a flaw specific to him.

His strategy worked, as Rubio's answer to the immigration question was wildly popular with the focus group of likely primary voters that pollster Frank Luntz had put together for Fox News that night, leading Luntz to call it the "most important and impactful moment of this debate."

The focus group was really loving Rubio last night, calling him "confident" and "presidential". His performance, however, turned most people in the mainstream media. Leonid Bershidsky of Bloomberg felt both Rubio and Cruz were trying too hard.

Benjamin Lanzy of the Vanity Fair seems to think that Kelly demolished Rubio and left him "bloodied rather than triumphant."

Howard Kurtz was equally unimpressed, saying that Rubio was "bruised by the intense back-and-forth on immigration".

But the focus group felt very differently. Same story with the Daily Caller, a right wing publication that is a better measure of how base voters feel than whatever Kurtz is spouting today. "Rubio was smooth, passionate and often substantive, but most importantly he came across as likable," they declare, adding that Cruz lost the debate.

This disconnect between political journalists and the right-wing base is easy enough to understand. To journalists, Rubio comes across as a lightweight who mistakes belligerence for political acumen. But for the base, that just makes him one of theirs. To journalists, a rather nerdy lot, Rubio's glib frat daddy act is deeply off-putting, but to conservative voters, the pop-collared prep who has exponentially more ego than intelligence is apparently a charming sort. These are voters who loved and continue to love George W. Bush, after all. Snooty frat boys just do it for them.

Of course, that's the problem for Rubio at the end of the day. He may have done a good job appealing to right wing voters during this debate, but it's hard to imagine that translating to votes in the primary. In any other election, the Rubio brand — a glibly charming prep who can spout pieties when needs be but whose heart is in kicking sand in people's faces — would be killing it with this crowd. But in this election, he's going up against Donald Trump.

No one is beating Trump in a sadistic prep contest. Trump isn't just the best at the form, he, along with teen rom-coms, helped develop the type in the type in the 1980s. Trump was sneering at the geeks from behind a popped collar while perched next to his model wife on a yacht when Rubio was still playing on the JV football team. You can't beat the master at a game he invented.