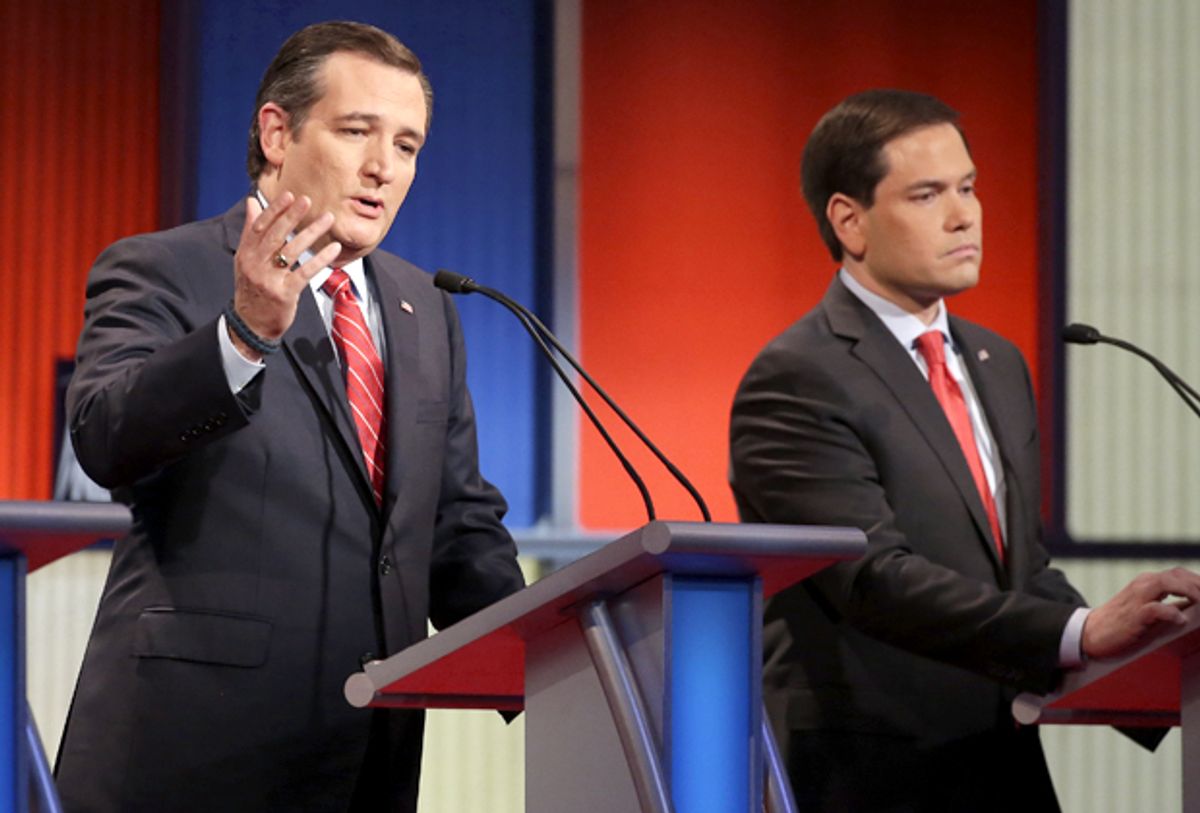 What became immediately clear in the first half hour of the seventh Republican debate, airing on Fox News on Thursday night, was that the candidates weren't going to say anything you haven't heard from all of them before: They are a-scared of terrorists, they like to pretend they are tough, they think they're the only true conservative on stage.

Under the circumstances, the only question of interest in how they're going to deal with the orange-haired elephant in the room---or should we say not in the room — Donald Trump. Most of the candidates went with the path of least resistance, which is just ignoring him and going forward with the debate like his previous participation was all a bad dream. This turned out to be the wisest choice, because for the two candidates who gave into the temptation, the experience was so embarrassing that it was hard not to cringe for them.

Ted Cruz started off promisingly, using his spot as the first candidate to speak to say, "Now, secondly, let me say I'm a maniac and everyone on this stage is stupid, fat, and ugly. And Ben, you're a terrible surgeon."

Big laugh. But then he had to ruin it by explaining the joke.

"Now that we've gotten the Donald Trump portion out of the way," he continued, as the laughter turned from genuine to charitable. He then immediately returned to kissing Trump's ass, insisting he doesn't insult the man and that he's "glad Donald is running".

This trying-too-hard quality has haunted Cruz's interactions with Trump from day one, and has only grown more peaked in the past 24 hours, as Cruz, with the thirst of a man who's been hiking the Sahara for three days, tried to hijack Trump's debate boycott stunt by demanding a one-on-one debate with Trump. You get the feeling that he just keeps texting Trump and sits there, sadly, waiting for the read receipt so he can get mad that Trump isn't texting back.

Not that Jeb Bush was any less awkward. "I kind of miss Donald Trump," he said in his first response to a question. "He was a little teddy bear to me," he added, with visible nervousness. You could see the wheels churning in his head: The aides said that a little irony and self-deprecation would make this go down easier, but can he pull it off? Will the audience understand such elaborate rhetorical tricks? Should he just yell about how everyone else is a "loser" instead? Worry, worry.

But lucky for him, Cruz was going to emerge as the clear winner of the Trump-induced gooberery. It quickly became clear that his plan was to Trump's absence to present himself as the new Donald Trump. He complained that "the last four questions" were nothing but invitations to "please attack Ted,"  obviously trying to imitate Trump's strategy of accusing everyone else of being obsessed with and out to get him.

In case you didn't get it, he drove home the wished-for comparison by saying that if the attacks continue, "I may have to leave the stage."

"It's a debate, sir," Chris Wallace replied. If it was Trump, he would have grinned and shrugged his shoulders and the crowd would laugh and Wallace's retort would have been successfully deflected. But Cruz, of course, has no skill at this, and instead he ended up just looking like a petulant baby.

It turns out that being Donald Trump is not as easy as it looks.