Al-Qiq has spent 65 days on hunger strike & says Israel is torturing him. Rights groups are calling for his release 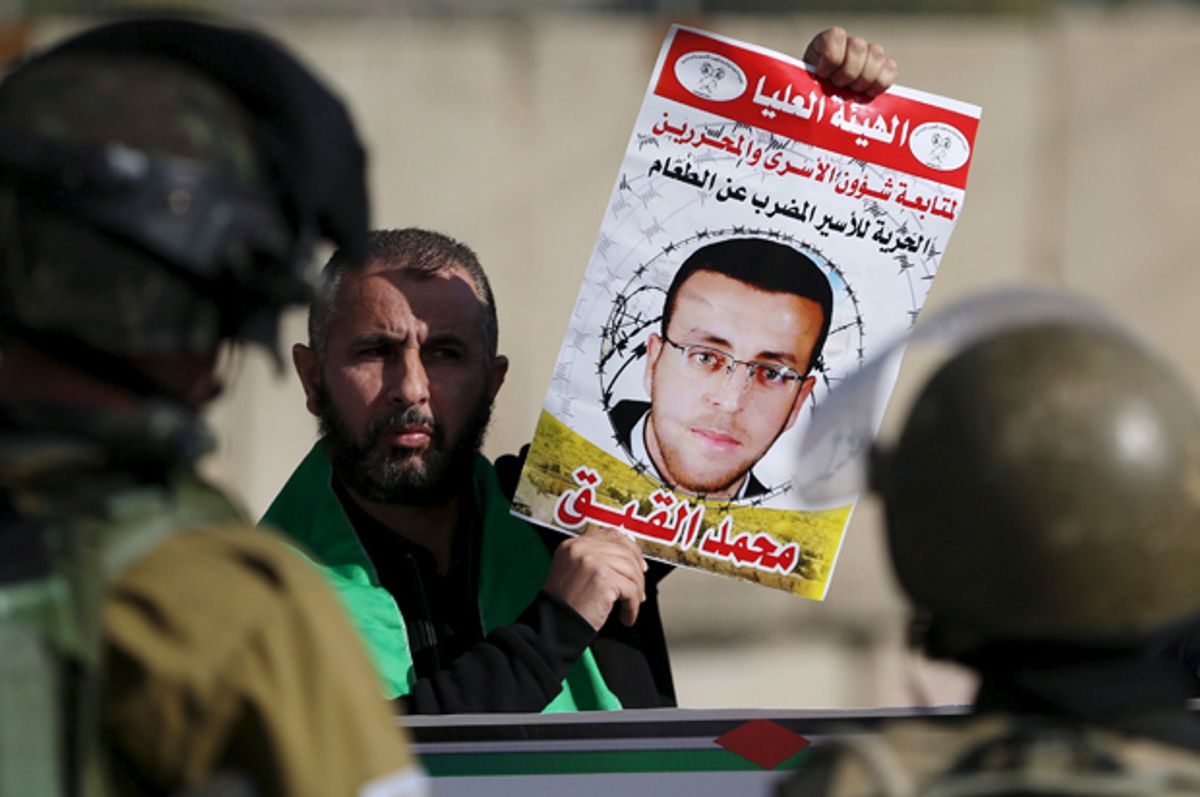 A Palestinian protester standing in front of Israeli soldiers holds the picture of imprisoned journalist Mohammad al-Qiq, near the occupied West Bank city of Ramallah on Jan. 22, 2016. (Reuters/Mohamad Torokman)
--

Mohammad al-Qiq is on the verge of death. The 32-year-old Palestinian journalist was imprisoned by Israel without charge or trial. In protest of his extralegal administrative detention, al-Qiq has refused food for more than two months. This week marks more than 65 days on hunger strike.

Human rights organizations including Amnesty International have called on the Israeli government to release al-Qiq immediately if he is not given a fair trial.

For 24 hours a day, al-Qiq is shackled to a bed, over which two prison guards stand watch. He and his attorney told Israeli publication +972 that doctors at the Haemek Medical Center are forcing him to receive liquids intravenously through an IV against his will.

The Israeli hospital's alleged forcible treatment of al-Qiq, along with the shackling of his limbs, likely amounts to abuse, the medical rights group noted.

A lawyer with the Palestinian Authority's Committee for Prisoners' Affairs observed that al-Qiq has exhibited "sudden symptoms that could lead to his death," and is unconscious and unable to speak, leading Palestinian news outlet Ma'an reported.

Amnesty International has stated Israeli "authorities have undertaken a number of measures aimed at pressuring him to end the hunger strike, some of which violate the prohibition of torture and other ill-treatment." The international human rights organization called on Israel to immediately end ill-treatment of al-Qiq.

Amnesty documented allegations that the Palestinian journalist has been tortured, citing reports that "he was subjected to a stress position commonly known as the 'banana,' which involves being tied in a contorted position to a chair, that he was tied to a chair for up to 15 hours at a time and that he was threatened with sexual violence by his interrogators, who told him that he would not see his family for a long time unless he 'confessed.'"

"The only way Mohammad al-Qiq feels he is able to challenge his detention, without charge, is with his body," said Sunjeev Bery, Middle East/North Africa advocacy director for Amnesty International USA.

"He must be released immediately or charged with a recognizable crime and brought before a trial that meets international fair standards," the Amnesty official stressed.

Al-Qiq works for the news channel Almajd, and is from the village of Dura, which is near Hebron in the Israeli-occupied West Bank.

Israeli occupation soldiers blew up the door of al-Qiq's house on the night of Nov. 21, 2015 and detained him for interrogation. For days, he was not allowed to contact his wife or attorney, who did not know where he was or what had happened to him. On the fourth day of his extrajudicial imprisonment, al-Qiq began his hunger strike.

Shin Bet, Israel's equivalent of the FBI, claims al-Qiq has worked with Hamas, a militant Palestinian political party. The Israeli government alleges he is linked to terrorism, but has not charged him with a crime. Amnesty reported that, although any alleged evidence against him is being held secret, the Israeli military judge at Ofer Military Court said al-Qiq is being accused of "incitement," of working with media associated with Hamas and of being a "threat."

Sahar Francis, director of the Addameer Prisoners Support and Human Rights Association, said the "continued hunger strike of Mr. al-Qiq exemplifies the non-violent protest of a detainee who is being held without charge or trial with absolutely no adequate legal remedies, for example, to examine the secret evidence on which he is being held."

"The practice of his forced treatment is a blatant violation of his human rights, of his bodily integrity and his individual autonomy," she added.

Israel has detained thousands of Palestinians without charge or trial in what it calls administrative detention. B'Tselem: The Israeli Information Center for Human Rights in the Occupied Territories says the Israeli government's frequent use of this method likely violates international law. Prominent American scholar Alon Ben-Meir has argued Israel's use of administrative detention is probably illegal.

Hassan Jabareen, the founder and general director of Adalah: The Legal Center for Arab Minority Rights in Israel and a former Yale World Fellow, says, "Despite widespread international condemnation, Israel continues an arbitrary and illegal administrative detention policy, whereby the state can detain Palestinians indefinitely without charge or trial."

Jabareen estimates that there are approximately 660 Palestinians currently held in administrative detention in Israeli prisons. He maintains al-Qiq's "detention and conditions of confinement violate his basic rights to be free from torture and ill treatment, as well as his rights to due process and dignity."

"Under administrative detention,Palestinian detainees have been imprisoned without knowing why they’re being imprisoned or when they might be released," explained Amnesty's Sunjeev Bery. "They are given virtually no way to challenge the charges they face, the so-called 'evidence,' or their accuser."

Adalah said it calls "on the international community to demand his immediate release, and an end to the violations of the human rights of all Palestinian prisoners."