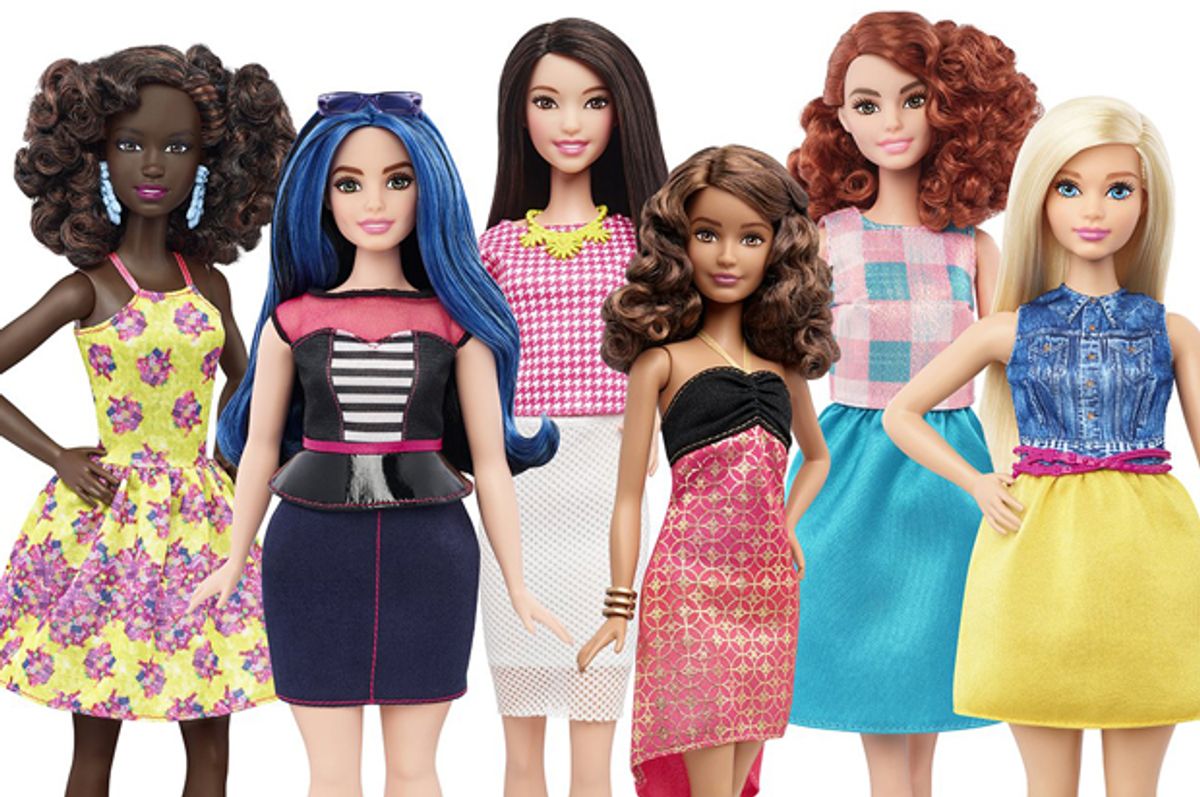 Barbie and Ken have been together, off and on, for more than 50 years now. But it’s been a strange, unbalanced relationship. While the critique of Barbie as creating bad self-images for girls goes back decades, Ken has mostly stayed out of the news. Sure, there’s been “Sugar Daddy Ken,” a recalled “Earring Magic Ken,” and costume-changing roles in the “Toy Story” movies. But Barbie has remained at the center of the conversation around toys and body image, while Ken has mostly stayed aloof and blandly handsome.

This week, new Barbie dolls were announced that make her less like a creature from science-fiction and more like a real woman. (The standard Barbie would have to walk on all fours and would have room for only half a liver. The original Barbie was based on a cartoon of a German prostitute; some revisions were inevitable.) The latest changes are part of a process that’s been going on for a while now.

Mattel has been putting Barbie through a transformation for the past two years to bring the doll in line with realistic body standards and reflect the diversity of the kids playing with the dolls. Last year Mattel introduced 23 new dolls with different skin tones, hairstyles, outfits and flat feet, rather than the perpetually pointy ones meant to fit into sky-high heels.

This year's dolls will be available in tall, petite and curvy body types. Online sales start Thursday on Barbie.com and dolls will start hitting stores March 1, with a total of 33 new dolls being rolled out by the end of the year.

So what’s happening to Ken? So far, this year, not much. But it kind of makes you wonder with a crisis in masculinity – men losing ground in the economy, the decline in manufacturing jobs, the rise of female CEOs, the critique of “mansplaining” – if Marvel will roll out new Kens as well.

So far, there’s been some pretty bad ideas. From CBC News:

While Mattel and similar companies have been taking steps to combat criticism over their "gendered toys," Barbie is still marketed almost exclusively to girls (and, of course, parents with female children.)

It may seem odd to some, then, that masses of grown men are demanding a more realistic-looking male companion for Barbie on Twitter right now.

Does the world really need a hairy-chested, beer-drinking Ken doll with something other than a smooth patch between his legs?

It only seems fair, right? But the possibilities so far are kind of creepy. There’s something menacing about this grumpy “curvy Ken.”

And there’s this unpleasant group:

Why does it seem like a toy company can imagine a whole slew of more realistic and more diverse Barbies, but the new Kens are all bizarre parodies?

It’s worth remembering that Ken has always been as aspirational as Barbie – even, as this post says, varying versions of a metrosexual, and a snazzy dresser despite strange hair choices. The decades have changed in all kinds of ways, but women still judged far more on their appearance than men are. (Can we imagine a female version of Chris Christie running for president?) But Ken – maybe because he's always tended to be bought by girls -- has been ahead of the curve.

I vote we keep him that way. Boys need role models too – so let’s think up some that are not embarrassing or ridiculous. If Barbie dolls are worth reimagining, so is Ken. Let’s reimagine him without a beer gut, and without Gamergate blogs, and as a man who doesn’t condescend to women. If the genders are going to get along, and men are going to adjust to where we are now, we’ve got to start somewhere.