Someone you love has had an abortion: It's time to end the silence

For 15 years I kept my own abortion story to myself. Now I know that sharing our stories is changing the culture 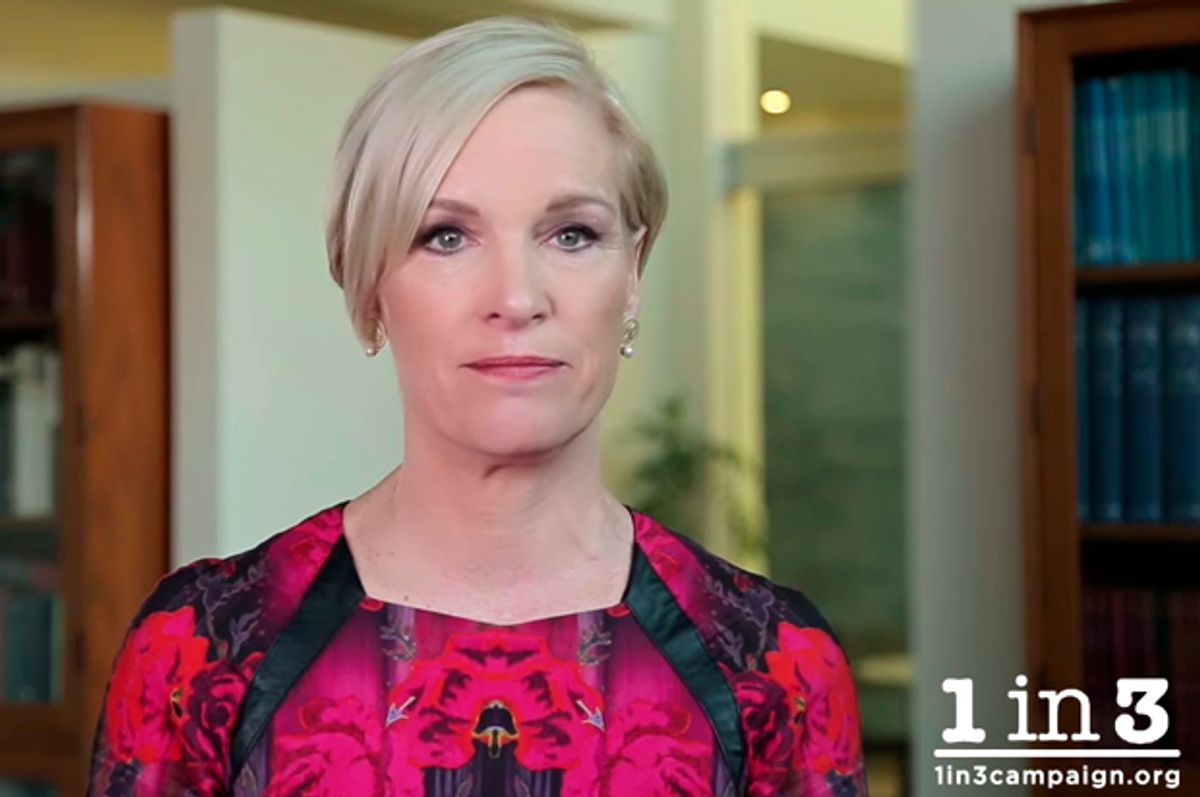 As we mark the 43rd anniversary of Roe v. Wade this month, facing increased violence against abortion providers and hateful and misleading political rhetoric about the care they provide, it’s hard to not feel despondent. When I think about the brave women and men who fought for reproductive rights in 1973 and what they sacrificed so we wouldn’t have to face attacks on abortion care in 2016, I wish the world could hear their stories again.

But in a nation in which one in three women will get an abortion in her lifetime—including me— chances are that you love someone who has had an abortion, but you might not know about it. With a statistic like that, there’s no shortage of stories about the need for safe, affordable abortion access. We just need to tell them.

The past year was particularly difficult for those of us who champion women’s healthcare in this country. The release of the illegal Planned Parenthood videos last summer ignited a harmful blaze of activity unlike anything we’ve seen in years, including a near-government shutdown, the unnecessary interrogation of Planned Parenthood president Cecile Richards, and, of course, the horrific shooting at a Colorado clinic in November that left three people dead.

While it may seem hard to believe, the violent rhetoric surrounding this summer’s videos has done one good thing: Americans are finally thinking seriously about abortion again and realizing that women’s healthcare is being systematically undermined by years of state and national efforts to chip away at abortion rights.

Abortion access has quietly and rapidly slid backward at the state level over the past decades. In fact, 51 new abortion restrictions were enacted in the first half of 2015 alone, and 28 states now require a woman to endure a mandatory waiting period before actually having a procedure.

The videos released this summer and the violent backlash may have surprised many who assumed that abortion access was equal and fair around the country. But those who oppose the right to choose have been fighting ever since Roe to outlaw abortion and go back to the days when women died from unsafe care. When they lost at the national level in 1973, they switched tactics – to enacting oppressive state-level policies, threatening providers with violence, and shaming women who have had the procedure.

If you listen to the antiabortion right, they will claim that abortion is still “legal,” even as they create an atmosphere to make it nearly impossible for women to obtain medical care.

This spring, the Supreme Court will consider whether a restrictive Texas abortion law that has forced more than half of the state’s clinics to close violates the Constitution. What makes this case so significant is the importance of personal testimony, since abortion in Texas is still technically legal. The politicians who enacted these restrictions claimed that they were concerned about women’s health and that they were keeping abortion “legal.” But the stories of women forced to drive hundreds of miles, spend multiple nights in hotels, and walk through lines of angry protesters to obtain a common medical procedure calls their motives into question.

That’s the piece of this political debate that’s always been missing – the thing that makes this issue so personal for so many of us: our own abortion experiences.

When I found myself pregnant, with a 6-month-old baby and my husband having left six weeks earlier after draining our bank account, I realized I could not care for another child and decided to get an abortion. To this day, I am confident it was the most responsible, moral and loving action I could have taken for myself and my son. But for 15 years I kept this story to myself. It wasn’t until a co-worker shared her own abortion story with me that I was inspired to do the same.

Fortunately, it’s clear that sharing our stories is changing the culture. In the past few years, numerous celebrities have shared their abortion stories. In the wake of the videos this summer, the #ShoutYourAbortion hashtag was born, encouraging a generation of young people to share their stories around abortion, while fall TV in 2015 began to include abortion as regular part of characters’ lives, and not an earth-shattering after-school special.

Telling our stories isn’t just an effective response to those who aim to limit access to women’s health services; it’s also a way to connect with and motivate each other. Advocates for Youth’s 1 in 3 Campaign has done this for so many people across the country, working to end the stigma around abortion silence by sharing our personal stories and experiences. We’ve found creative ways to do this through theater – 83 college campuses across the country are now performing or have performed "Out of Silence," a play composed of a series of vignettes based on real abortion stories, and a brand-new abortion play featuring a series of personal experiences will tour this spring.

It is essential to center stories of real abortion experiences like mine or those of Texas women in the debate about our country’s abortion policies and keep Americans aware of the mounting attempts to place “undue burdens” on access to abortion care.

The Supreme Court justices need to hear the real effects of restrictive abortion laws on women, which is why the campaign shared these stories at a Speakout in Washington, D.C., last week and has already filed 30 stories as part of an amicus brief for the justices to consider.

As we prepare for this case, we must continue the momentum we’ve built and ensure stories from the real people facing the kinds of undue burdens central to the case are heard. Rather than making it prohibitively expensive and unduly difficult, we should work to protect safe access to abortion care, so women are able to fully control their healthcare and their own destinies.

Deb Hauser is executive director of Advocates for Youth, an organization that champions efforts that help young people make informed and responsible decisions about their reproductive and sexual health.