The sickness within the GOP: "13 Hours," "Fox News" and the Republican paradox

GOP imagines itself as only party to protect America, while projecting a disgust for Americans different from them 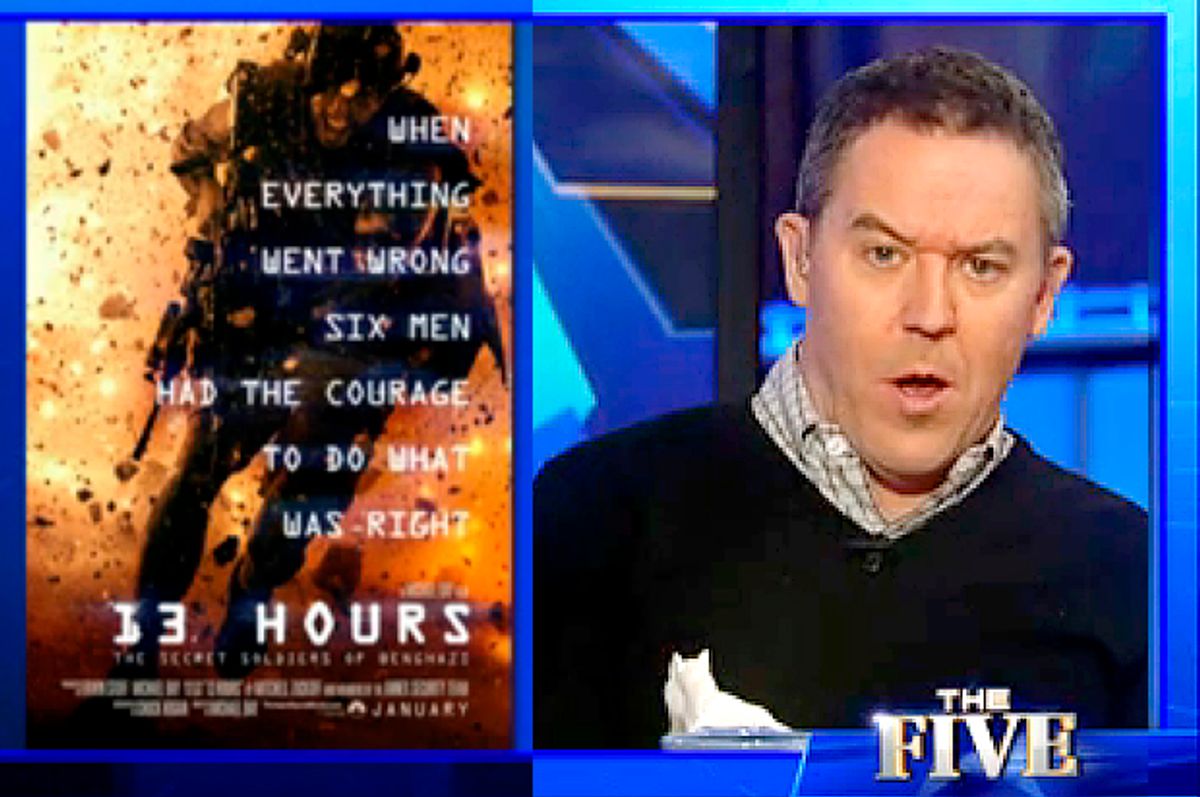 Michael Bay’s film “13 Hours” about the Benghazi attacks was certain to draw comparisons with Clint Eastwood’s “American Sniper.” Both hit wide release on Martin Luther King weekend. Both told stories of post-9/11 military heroes whose actual histories didn’t quite match up with what was shown on screen. And both were highly anticipated to help offer the pro-military, U.S. exceptionalist view the GOP so desperately craves.

Given “American Sniper’s" success at the box office, it is no surprise that “13 Hours” received a lot of hype and high expectations. Bay holds the No. 2 spot after Steven Spielberg for top-grossing director of all time, after all. Now that the dust has settled, we are able to confirm that “13 Hours” is just like “American Sniper”–only much worse.

Last January I wrote about how we could trace the flaws with “American Sniper” to two key moments when its director revealed his underlying delusion and aggression. We could see Eastwood’s delusion when he spoke to an empty chair at the Republican National Convention in 2012 and we could see his aggressive side in his death threat against Michael Moore.

My point was that these were not random, one-off events, but, rather, a pattern we could detect in the film and in many of the attitudes of Tea Party-type conservatives. One year later, we can now observe that since “American Sniper” everything wrong with GOP politics is on the rise.

Take lying and getting away with it, for example.

If “American Sniper” led to fact-checking Chris Kyle’s story, now with “13 Hours” any fact-checking is itself considered a partisan attack. It simply doesn’t matter that the Benghazi CIA chief spoke out after the film’s release to say that the scene that shows him issuing a “stand down” order is “entirely untrue.”

In fact, unlike most films based on true stories that open with a caveat that reveals the inherent fictionalizing nature of feature films, “13 Hours” opens with a line that reads: “This is the true story you were never told.” It is not “based on a true story.” They suggest that is true and it is a truth that has been suppressed.

When a Hollywood film presents itself as truer than the testimony of a CIA chief, you know you have entered a whole new level of distorted reality.

“American Sniper” had to deal with the same issues of facts versus fiction. But don’t try telling that to the film’s loyal fan base. As Chris Mooney explains, the “Republican brain” has become increasingly immune to any correcting information. One of the best ways we can see this level of motivated reasoning is in the intense ways that fans of “American Sniper” and “13 Hours” argue that these Hollywood productions depict the truth despite eyewitness testimony to the contrary.

“13 Hours” shares a lot more with “American Sniper.” Like “American Sniper” it depicts the local people as a swarming, threatening mass. In “13 Hours” Libyan attackers literally emerge from “zombie land.” In fact, Breitbart grouchily observes that its characterization of the Libyans in the film earned it an “Islamophobe of the Year” award.

Also, like its predecessor, “13 Hours” is short on context, making it hard for viewers to understand the bigger picture. And similar to “American Sniper,” “13 Hours” is a movie about heroism, where good fights evil. We learn, for example, that “They’re all bad guys until they’re not.” Only now instead of one heroic sniper we have a “clone army” of heroes with beards.

It’s all pathetically reductive, which might just be boring if the film were yet another edition of “Transformers.” Except that it’s not. It’s a film about a hotly contested event that has become intensely politicized. Hillary Clinton may never be named in the film, but there is no question that the film is being used to try to destroy her career.

As Clare Foran writes in the Atlantic:

“For all the hype surrounding the high-profile investigation of the attacks led by Trey Gowdy, the chair of the House Select Committee on Benghazi, Republicans have so far failed to unearth any evidence of wrongdoing capable of sinking Clinton’s political prospects.”  Yet, when Foran went to watch the film with a pack of Republicans in D.C., it was clear that none of that mattered.   They were still noshing on popcorn and dreaming that the film would bring Clinton’s demise.   It’s all very sad.

That hasn’t kept Fox News from gushing over the film and running 32 segments on it from Jan. 4-19.  Megyn Kelly covered it for 1 hour and 22 minutes, heralding it as the film that would make Hillary Clinton have a lot to answer for.  The segment aired before the film had even been released, revealing a not-so-subtle Fox News agenda to use the film to bash Clinton.

But here’s what’s really awful about “13 Hours.” If “American Sniper” failed to reflect the complex realities of post-9/11 geopolitics, “13 Hours” takes those failures to a level of pure paranoia. Except that now the fear and anger aren't directed toward a mass of dark-skinned, Islamic people, now it’s directed at the very people the soldiers are there to protect.

In “American Sniper,” Kyle’s enemy were Iraqi insurgents. Now with “13 Hours” the real conflict is between the ex-armed forces contractors and the people who hired them. The entire plot revolves around the tensions between the six CIA specialists and the CIA, and then later the U.S. government in general.

From the outset the relationship between the security specialists and the CIA chief is hostile. The security force isn’t just in conflict with their boss, though; the specialists are in conflict with the agents they are protecting too. Every time the ex-military contractors leave the compound to accompany a CIA mission, they are at odds with the CIA agents they are protecting.  The agents are depicted as unappreciative of their security detail and outright stupid about the risks they face.  They might be angry and annoyed, but the specialists are true heroes, so they protect the idiots anyway.

That’s not all, though. Not only are the CIA agents overeducated jerks who can’t appreciate the real dangers of Libya, the government they work for also doesn’t care enough to save them. Once they are under attack, the government doesn’t deploy readily available resources to help them. We are shown maps and planes and soldiers at the ready. The only problem is a government that doesn’t care enough to do something and prefers to sit by, watching them die. In essence, these amazingly talented specialists are alone in a sea of hostile—yet “friendly”-- forces.

When you stop and think about it, that is exactly what is wrong with GOP politics today. And I’m not just referring to the fact that a drunk man accidentally shot a woman---and almost killed her-- during a screening of the film in Renton, Washington. The shooting is horrible but it is just the outward symptom of a sickness within the GOP.

The GOP suffers from a deep schizophrenia: It imagines itself as the only party that can bring safety and security to the nation at the same time that it projects deep hatred for the majority of people in that very same nation. And in a weird twist of logic, it wants to be the government, even though it hates the government. (In case you didn’t know, the GOP that has recently spent more on government than Democrats. So forget the idea that the GOP is the small government party.)

In the logic of the film, no one else can see the heroism of these guys until they are truly desperate and begging them for help. This, of course, is the GOP story of how heroic military actions are missed by everybody but themselves.

But here’s the catch. It’s not true.The CIA chief is shown in the film treating the contractors like stupid children. In contrast, the real CIA chief explains that that depiction is a “distortion.” And he describes the security team as highly accomplished. “These guys were heroes,” he said.

Showing that the CIA chief respected the six contractors would not have worked for the film. Just as it never works for the GOP to imagine that anyone else understands the sacrifices of the military.

Despite claims that the film is not partisan we now have significant evidence to see that it has been used for GOP propaganda. From Donald Trump offering free tickets in Iowa, to special screenings for Republicans in D.C., to Fox News coverage that gushes over the film, it is clear that there is hope that “13 Hours” could help advance GOP goals this election.

Given the fact that the film is being characterized as a flop, those dreams seem unlikely. Don’t expect the film’s fans to notice, though. They are too busy being mesmerized by the “true stories” found in Hollywood pyrotechnics to show much chance of waking up.