Take a good look at what Bernie Sanders has done throughout his career and one thing is clear: He gets stuff done 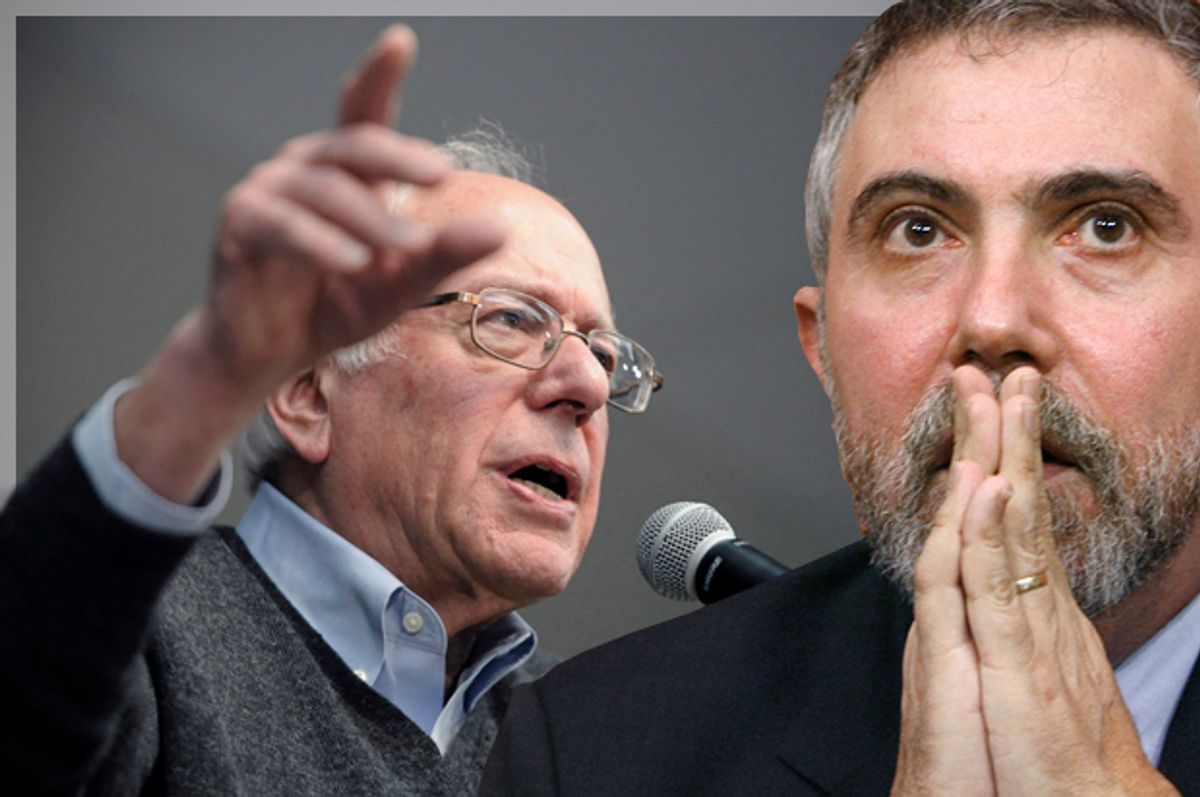 Paul Krugman recently penned a piece in The New York Times about the Democratic candidates for president, taking aim in particular at Bernie Sanders, whose idealism Krugman believes is quixotic. “There’s nothing noble about seeing your values defeated because you preferred happy dreams to hard thinking about means and ends,” Krugman writes. He posits that “Sanders is the heir to candidate Obama,” while “Clinton is the heir to President Obama” — the dreaming revolutionary versus the get-it-done realist.

On this matter, Krugman is woefully mistaken, because Bernie Sanders is absolutely a pragmatist focused on “means and ends” — and if you don’t know that, you haven’t been paying attention.

Even as a young person, people who knew Sanders say he was “not like the rest of us kooks, who didn’t know what we were doing. He had more ideas and he spoke better.” They remember him as “very smart and very policy oriented,” always asking, “‘What can government do to solve this problem?’ or, ‘What policy… should we be asking for?’”

At the University of Chicago, Sanders was a chapter leader of the Congress of Racial Equality (CORE), the famous civil rights group that organized the Freedom Rides, and helped to lead the group’s sit-in protesting racism in university housing. The 15-day movement ended in success, with the university agreeing to create a new committee including students, faculty and local civil rights leaders, to investigate and take action on off-campus housing inequality.

He was so fiscally conservative that some Republicans say he managed to “out-Republican the Republicans.”

Frederick J. Bailey, a conservative stockbroker, says of Mayor Sanders, “It is a nitty-gritty job of day-by-day executive decisions and he did it well. He got things done.”

Sanders did not flail about in “happy dreams,” as Krugman asserts, but “worked collaboratively with other politicians to create a more livable city.”

As a representative in the House, Sanders passed more amendments than any other representative serving with him, steadily working with the “hardheaded realism” that he is not, by Krugman’s account, supposed to have, to reduce the cost of college, expand free health care, crack down on child labor, increase winter heating funding for the poor, fight corporate welfare, and hold the IRS accountable.

Contrary to the notion of Sanders as an alienating “purist,” the democratic socialist put together “bipartisan coalitions of Republicans who wanted to shrink government or hold it accountable and progressives who wanted to use it to empower Americans” to get concrete results.

“[Sanders] would call them ‘tripartite amendments’ because we’d have him and he’d get a Republican, he’d get a Democrat and he’d pass things. He’s good at building coalitions.”

Senator Richard Burr, R-N.C., says the same, finding Sanders “to be one who’s willing to sit down and compromise and negotiate to get to a final product.”

In the Senate, Sanders has continued his sensible, persistent push for real change by bringing together bipartisan coalitions to pass legislation that has protected our troops, restricted the bail-out to protect U.S. workers, greened our government, exposed corruption in the military-industrial complex, helped to treat autism in military health care, and taken care of veterans’ kids.

“I learned early on not to be automatically dismissive of a Bernie Sanders initiative or amendment… He’s tenacious and dogged and has determination, and he’s not to be underestimated.”

Sanders is also a ranking member of the Senate Committees on the Budget, Energy and Natural Resources, and Primary Health and Retirement Security, and a member on the Committees for Children and Families, Transportation and Infrastructure, Health, Education, Labor, and Pensions, Veterans’ Affairs, Energy, National Parks, Water and Power, Environment and Public Works, as well as others.

In addition, Senator Sanders achieved the first-ever audit of the Federal Reserve, a decades-long fight of Republican Ron Paul, successfully winning the votes “to do it by forging a compromise.”

With the Affordable Care Act on the high wire, and millions of Americans still uninsured, Sanders leveraged his influence to win free health treatment for 10 million Americans through Community Health Centers — now, even Republicans are requesting funds for his program, which continues to cover millions of Americans who would otherwise lack access.

Sanders also worked with Republican John McCain to successfully overhaul the Veterans Administration, passing the most comprehensive veterans legislation in decades. In an interview with the National Journal, McCain praised Sanders, saying, “I found him to be honorable and good as his word,” while Senator Jack Reed, D-R.I., said that, “Frankly, without him, I don’t think we would have gotten it done… It was a great testament to his skill as a legislator.”

Senator Chuck Schumer, D-N.Y., also spoke highly of Sanders, saying, “He knew when to hold and knew when to fold and, I think, maximized what we could get for veterans.”

In stark contrast to Bernie Sanders’ constant portrayal as an alienating and aggressive member of Congress, he has “forged strong relationships with members of both parties in nearly 25 years on Capitol Hill.”

And Senator Jack Reed, D-R.I., describes Sanders as “a gentleman, thoughtful, a leader… If you want to have a pleasant discussion on not only policy issues but just issues of the day, he’s a pleasant guy.”

Bernie Sanders is not some pie-in-the-sky, floundering “purist,” as Krugman argues, but an intelligent, pragmatic change-maker who has, time and time again, put together coalitions and compromised with his fellow legislators to achieve hard results.

To paint Bernie Sanders in such basic, simplistic terms is to ignore the truth of his record overflowing with progressive accomplishments, skillful negotiations, realistic compromising and colleagues who respect him.

There is a reason Sanders is more beloved by his constituents than any other member of Congress — he has combined what Krugman aptly terms “high-minded” leadership with deft policy-making, fiscal judiciousness with social liberalism, the agenda of the Republicans with the agenda of the Democrats, and strong purpose with clever bargains, to bring forth genuine, bona fide, palpable, honest-to-goodness change for the American people.