Who'd have thought the establishment paper owned by a multi-billionaire would take issue with Sanders' populism? 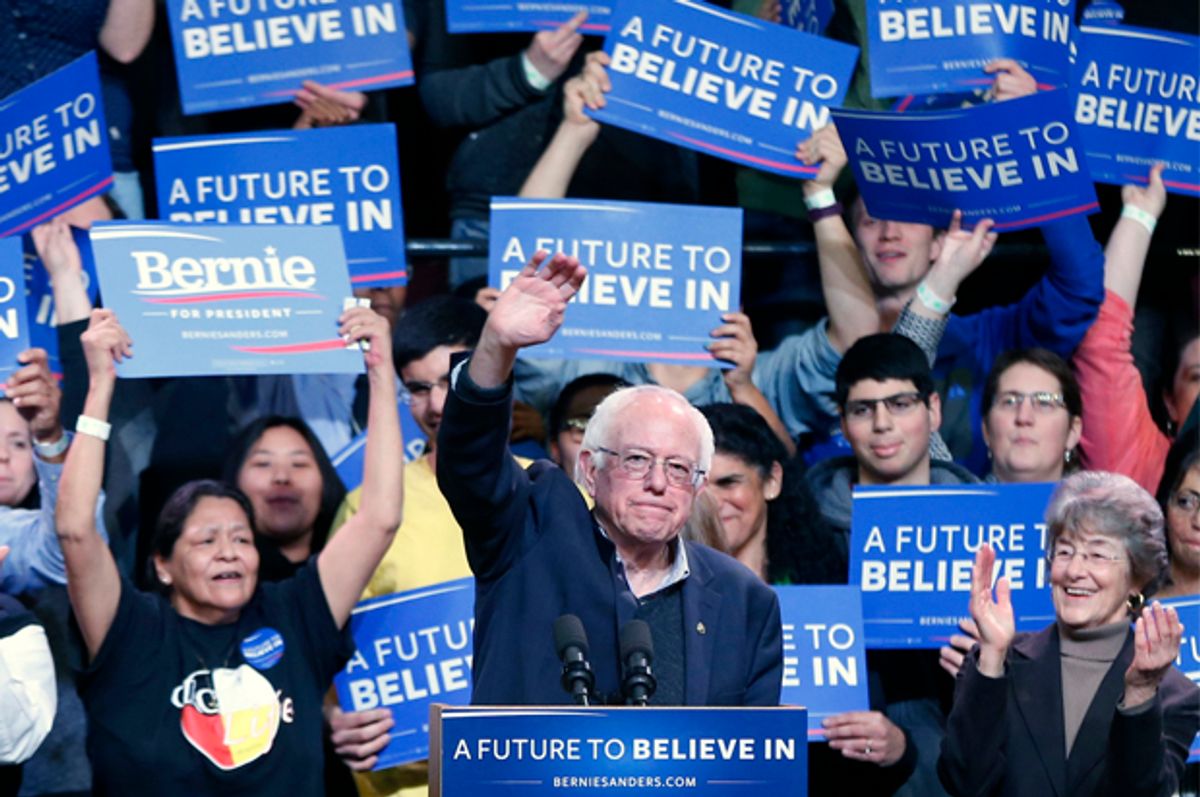 The Washington Post has been on something of an anti-Sanders kick lately. Its latest editorial, Bernie Sanders’s fiction-filled campaign, is somehow worse than its last one, which derided his single-payer plan in tabloid-like terms. It's entirely predictable that an establishment gatekeeper publication like The Post would not approve of Sanders' relatively radical policy proposals, but the degree to which it keeps offering up hysterical, and often times totally disingenuous critiques, is surprising even by its standards. Let's begin with The Post's first claim:

Mr. Sanders’s tale starts with the bad guys: Wall Street and corporate money. The existence of large banks and lax campaign finance laws explains why working Americans are not thriving, he says, and why the progressive agenda has not advanced. Here is a reality check: Wall Street has already undergone a round of reform, significantly reducing the risks big banks pose to the financial system.

Nothing here to see, folks! The claim that Wall Street is more or less reformed and “too big to fail” is a progressive fantasy. But wait, that’s not what theWashington Post itself said in 2014. As International Business Times’ Andrew Perez noted, The Post published a contradictory op-ed a year-and-a-half ago in, "The Post's View: Bank of America faces a hefty fine, but ‘too big to fail’ still threatens":

Just or not, no one should confuse this pending settlement with a solution to the deeper problem of the U.S. financial system —namely that Bank of America and other institutions remain too big to fail.

So which is it? Is Sanders’ too-big-to-fail rhetoric useful or not? It certainly was to the Washington Post a year and a half ago, but now it's not “reality.”

This is fatuous gaslighting. First off, the weasel word “many” is vague to the point of meaningless. Many Americans opposed the war in Iraq, charter schools and the Wall Street bailout, but this didn’t stop the Post from aggressively supporting all three. The whole point of campaign finance reform is you take the big money out of the election process and the voice of the less well-off will make our democracy more robust over time, not overnight. Sanders had said since the beginning of his campaign that his “political revolution” is a long-term process, but now the Post is lambasting Sanders with what he can achieve in the next election cycle based on the objections of some unknown “many.” This is patronizing hand-waving posing as pragmatism.

Similar “realism” arguments are advanced throughout the piece:

Sanders tops off his narrative with a deus ex machina: He assures Democrats concerned about the political obstacles in the way of his agenda that he will lead a “political revolution” that will help him clear the capital of corruption and influence-peddling. This self-regarding analysis implies a national consensus favoring his agenda when there is none and ignores the many legitimate checks and balances in the political system that he cannot wish away.

As I've written elsewhere, establishment gatekeeping—which make no mistake, The Washington Post is doing—is based on a tautology: Sanders can’t change people’s minds because serious people don’t think it will work and we’re serious people. Maybe the Post is right, maybe it's not, but bold policy initiatives are not all or nothing. The idea that Sanders' proposals must be adopted wholesale or not at all is a fallacy; no one thinks the U.S. will have single-payer healthcare overnight with a President Sanders, but this strawman is presented as the case. Of course, compromises will be made, as they always are, but how does starting a negotiation with a principled stand harm anyone? It doesn’t, except for those heavily invested in maintaining the conventional wisdom that single payer—though entirely standard in almost every other developing nation—is a laughable fantasy here in the United States.

That The Post’s sole owner, Jeff Bezos, is an arch-libertarian worth $53.2 billion and has a whole host of investments in private health care, we’ll assume is entirely separate from The Post editorial board's recent swath of hysterical Sanders criticism, including these two gems from last week; the first an editorial, the latter ostensibly straight reporting:

The Post's View: Mr. Sanders needs to come clean about the funding for his health-care plan

Most of Bernie Sanders’s big ideas are dead-on-arrival in Congress. Do Democrats care?

Notice the tone is the same throughout: Sanders is insane and his ideas will never work. There’s very little discussion of substance or evidence to support the idea that his plans are untenable. It’s just asserted as true.

The Post’s latest op-ed is just another example of this type of dismissive establishment ideology policing, much of which has animated Sanders anti-establishment appeal. To this extent, perhaps there's nothing more helpful to the Sanders campaign than an oligarch-owned newspaper bashing your every proposal at every turn.