The Illuminati rules?: Sorry, conspiracy theorists, but "secret societies" do not run the world

"Secret elites" are not America's problem. Looking to jury-rigged politics and voter apathy is more to the point 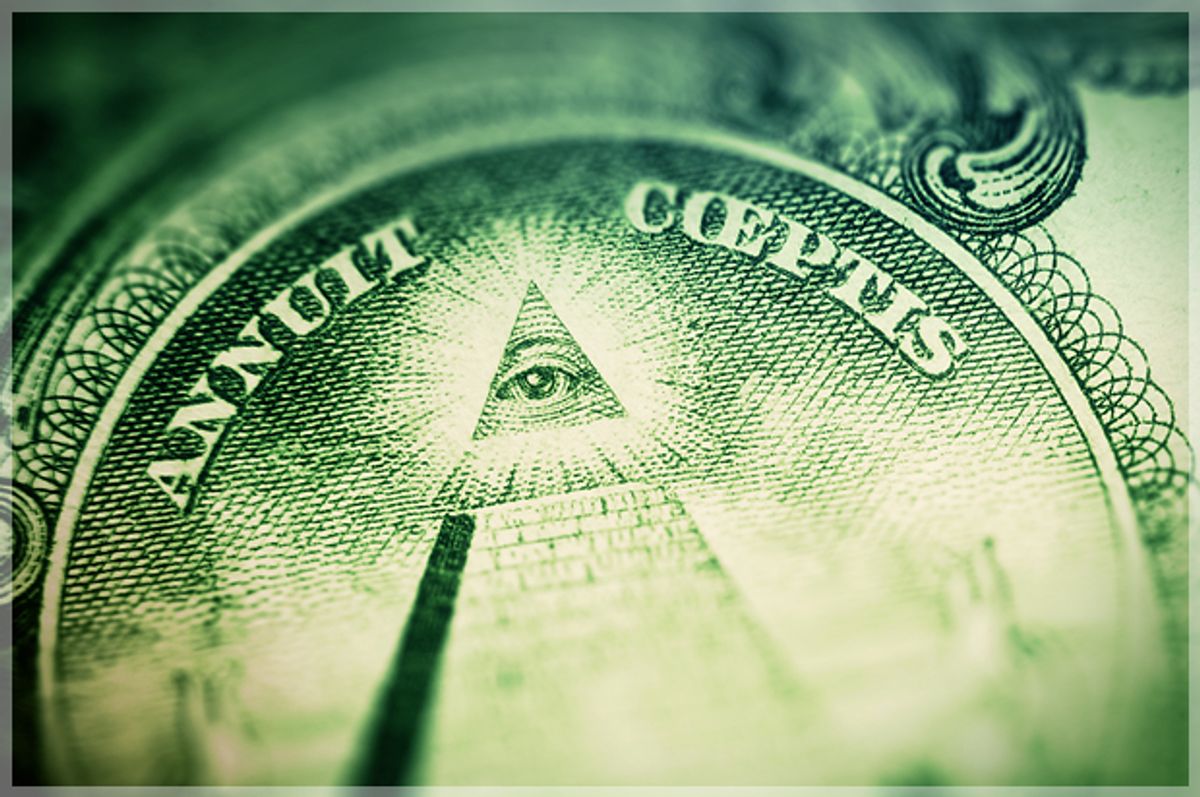 In the days since the FBI reportedly foiled a terrorist attack on a Masonic center in Milwaukee, the Internet has been abuzz with talk of the hidden influence of Freemasonry, the Illuminati and other “secret societies.” Much of it is utter fantasy – but the stakes are higher than ever before.

In today’s weapon-laden, conspiracy-addicted ("X Files," anyone?) culture, we can no longer hide from the real-life implications of throwing around accusations about “bloodlines” of wealth and hidden cabals. These things have dark and tragic consequences in today’s America.

For more than a century, modern jihadists have spouted anti-Masonic propaganda – but my concern here is with our nation’s homegrown variety. People have stopped me on basketball courts to ask if I am a member of the Illuminati because of my all-seeing eye tattoo; after appearing on radio shows I get comments like: “Horowitz is nothing more than a positive PR agent for satanic child sacrificing Illuminati scumbags” (I’m really not); people write to ask me about the latest nefarious imagery in Disney cartoons; bloggers want to know if President Obama is a member of Prince Hall Masonry (a traditionally African-American Masonic organization).

As a longtime historian of esoteric spirituality and the occult, let me be clear: The concentration of wealth and power in today’s world stems from corrupted policies and a lack of accountability and transparency – not bloodlines of wealth, underground cabals, or secret clubs, talk of which necessarily leads to very dark places and zero political progress.

I admit it: I admire the civic ideals and sense of self-improvement that runs throughout Masonry; I share its aesthetic taste for ancient symbols and a belief that certain threads of wisdom have passed through generations, sometimes conveyed through symbols. Yes, some of our founders, such as George Washington, were Masons; and 14 of 44 American presidents have been Masons (though the last fully fledged Mason to occupy the Oval Office was the mysterious Gerald Ford). Masonry was, at one time, part of our political firmament: The organization’s ideals of ecumenism, religious freedom and free elections appealed to the instincts of the founding fathers. Yet Masonry’s political influence has been on the wane since 1826, a year of populist anti-elitism, instigated in part by future president Andrew Jackson, himself a Mason. Since then Masonry has been an increased subject of rumors and a vastly decreased presence on the political scene.

The Illuminati has a similar history. The supposedly all-powerful, shadow group is said to include everyone from Alan Greenspan to Lady Gaga. In fact, the Illuminati have not existed for more than two centuries. The group was born in the early ferment of the revolutionary period in America and France. Founded by Bavarian philosopher and jurist Adam Weishaupt in 1776, the Illuminati advocated for then-radical ideals such as separation of church and state, free assembly, and democratic elections. The group employed occult symbols to indicate its sense of attachment to ancient civilizations, its embrace of radical ecumenism, and its affinity for Freemasonry, which Weishaupt, a friend of Mozart and Goethe, hoped could be transformed into a political vehicle for Enlightenment values. Weishaupt conducted his activities in secret partly because he wanted to infiltrate traditional Masonic lodges, which were not overtly political, and partly because the Bavarian government would have executed him for organizing against the aristocracy.

“If Wishaupt [sic] had written here,” wrote Thomas Jefferson in January 1800, “where no secrecy is necessary in our endeavors to render men wise & virtuous, he would not have thought of any secret machinery for that purpose.”

The Bavarian government put an end to the Illuminati within about nine years of its founding by banning all secret societies. So why are we still talking about it? In the wake of the French Revolution, influential conspiracy tracts bubbled up from Europe blaming the anti-clerical Illuminati for the demise of the old regime. Later on, similar conspiracies implicated the Illuminati and Freemasonry in the Bolshevik Revolution, an event that appeared to occur so suddenly and with such ferocity that Tsarist loyalists were at a loss to explain how the world they knew could vanish so completely. Rather than looking to grossly flawed policies, negligent and repressive governance, futile and horrific warfare, and administrative incompetence, they looked toward an easier answer in the existence of a “hidden hand” – anti-church, anti-monarchial and transnational in reach. Conspiracists had little trouble marrying this view to long-standing attitudes of anti-Semitism and xenophobia.

This provides a clue to America’s current fascination with “secret elites,” stoked by grossly irresponsible political ballyhooers such as Alex Jones and Glenn Beck. Donald Trump further exacerbates the situation by dropping continued hints about President Obama’s supposedly shadowy or Muslim identity: “There is something wrong with him that we don’t know about.” In times of complexity, the easiest and most memorable answers are the most colorful and least effortful ones.

What these figures also realize is that conspiracy theories are fun – they provide scintillating entertainment. But entertainment can quickly turn grim: Figures such as Jones and Trump may not understand, or, more likely, not care, that people all across the nation actually believe some of these things. In an election season where a majority of Republican voters believe that our president is a Muslim and when the GOP front-runner tells a gathering of Jewish politicos, “I’m a negotiator like you folks,” can we afford to be spreading theories about hidden elites?

I constantly tell audiences that if you want to look for corruption in our system, if you think there’s a source of greed, manipulation and malfeasance beneath the façade of daily life, don’t look toward rich-kid eating clubs like Skull and Bones or imaginary ideas about cloaked Federal Reservists or the Illuminati. Rather, consider a more mundane scene: a pre-fabricated cubicle, decorated perhaps with children’s drawings of rainbows and picnics, in which a health insurance rep sits on a phone headset denying or sidelining coverage for a legitimate claim – which often means repeatedly requesting pre-submitted diagnosis codes, tax IDs, etc. – because an actuarial table somewhere determines that if you deny or put off a claim then a certain percentage of wearied patients will just go away. That kind of mistreatment – are you listening, Martin Shkreli? – is a far greater source of moral depravity and abuse of power than anything emerging from imagined pentagram-bedecked halls of secret societies.

Let me close with a real story of Masonic influence on America. In 1775, as a British army garrison prepared to depart from Boston, a handful of freed men of color approached the encampment and requested certification to form their own, black-led chapter of Masonry. British officers and Masons, who had their own lodge within the garrison, granted the request, and the men formed African Lodge Number One, later known as Prince Hall Masonry. It was named for its founding lodge master, Prince Hall, a freeman and leather worker.  In 1777 and 1778, Prince Hall’s signature appeared on some of the earliest anti-slavery petitions circulated in the nascent republic. In effect, the first black-led abolitionist movement in American history grew from a branch of Masonry, an organization that extolled the refinement of the individual. Now, there are uglier chapters in Masonic history, including segregation and discrimination. The 19th century Masonic champion Albert Pike was a general in the Confederate army. But Masonry’s lasting influence can be found in its earliest ideals of religious toleration and civic engagement.

No, Virginia, secret societies do not run the world.  Jury-rigged politics and citizen apathy are the cause of our current dilemmas. We do not need to unmask cloak-and-dagger elites; we need a public that demands accountability, and understands where the real problems lie.

A PEN Award-winning historian, Mitch Horowitz is the author of "Occult America" and "One Simple Idea: How Positive Thinking Rehsaped Modern Life."