"The point of having f**k-you money”: We've seen how the economy broke down in '08 — Showtime's "Billions" shows us why

The financial crisis left an impression on TV and film, but "Billions" is the rare show that understands the rich 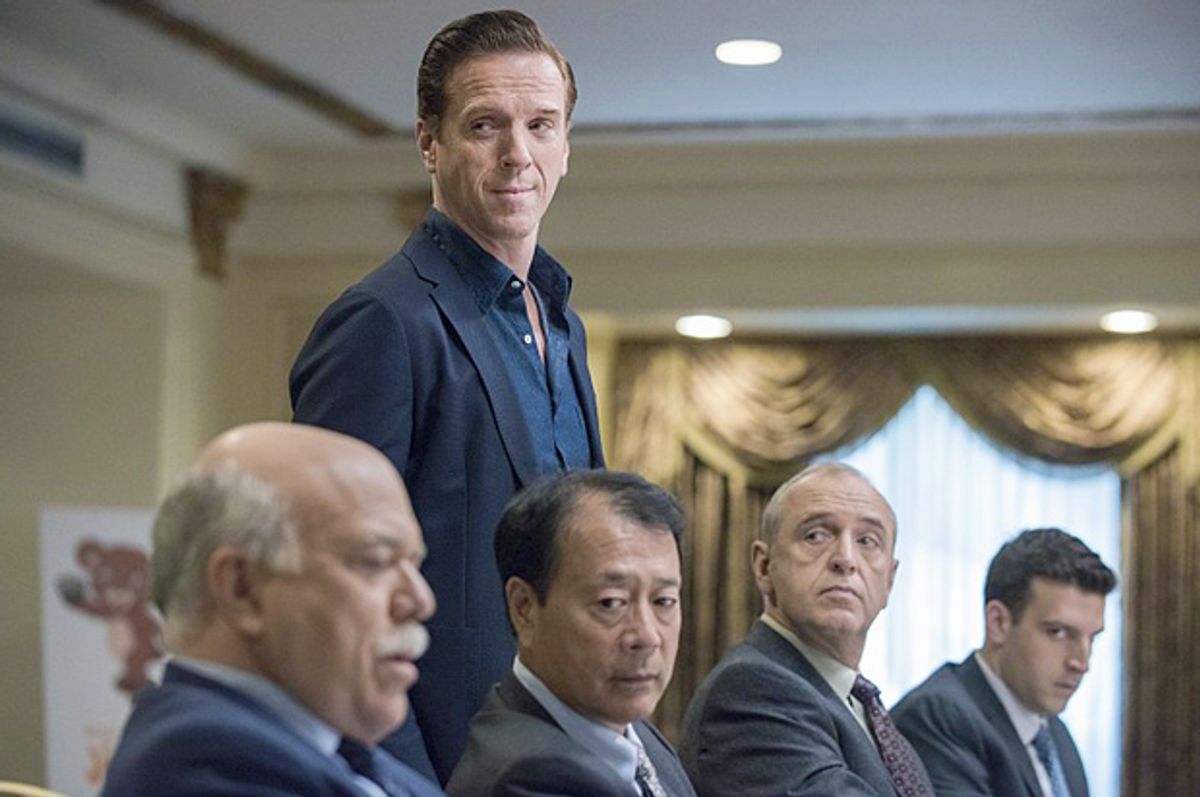 HBO's 2011 film “Too Big to Fail” is not even the second-best film about the 2008 financial crisis—Adam McKay's Oscar-nominated "The Big Short" and 2011's "Margin Call" would probably take those two spots. But “Too Big to Fail” is, like "The Big Short," an attempt to tell a true story, admittedly with significantly less punchy results. Cynthia Nixon plays real-life Assistant Secretary Michele Davis, who in 2008 worked in the Department of the Treasury as a close adviser to then-Secretary Hank Paulson. The film attempts to tell the story of not how the housing-bubble financial crisis occurred, but how Paulson wrangled Congress, Wall Street and the regulators in order to bail out the banks and avert a recession that would have been, by some predictions, worse than even the Great Depression.

"The Big Short" is a sublime exercise in tone switching, from swagger to devastation, and it builds to an ending with Steve Carrell dining al fresco on the Upper East Side that is all the more poignant for its apparently tranquil setting. "Too Big to Fail" doesn't have quite the same moments. But perhaps because it's a film about politicians, not stockbrokers, there's a throwaway moment in the middle of the HBO film that struck me as a stark moment of realization even to the non-banker, non-economist, non-politician viewer. Davis is trying to strategize her statement to the press, and has to figure out how to translate the intricate failures of collateralized debt obligations and credit-default swaps into language that the American people might understand. Her co-workers help her as best they can, explaining how the credit-default swaps are all being called in at the same time, because all those loans are defaulting—and how, too, merely the insurance for these risks creates a hundreds-of-millions industry that can tumble. “It all comes down,” says Neel Kashkari (Ayad Akhtar), one of Paulson’s high-ranking aides who would eventually oversee TARP. There’s incomprehension on Davis’ face. She asks, half-expecting the answer to be “no”: “The whole financial system?” The silence she hears in response answers her question. Kashkari and Jim Wilkinson (Topher Grace), Paulson’s chief of staff, work with her a bit on softening the language of what happened. But the immensity of it cannot really be sugarcoated.

With "The Big Short" making waves in advance of this year's Oscar ceremony, the 2008 housing crisis has come back to demand to be examined. Andrew Ross Sorkin, a finance reporter for the New York Times, wrote "Too Big to Fail" as part of that first attempt to examine the crisis; this winter, as accolades for "The Big Short" were rolling in, Showtime debuted another Andrew Ross Sorkin product: “Billions,” a drama about the ultra-wealthy of the finance world and the U.S. attorney tasked with keeping them honest. Sorkin co-created the show, along with Brian Koppelman and David Levien. Where “Too Big to Fail” is almost airless, crowded with jargon and with very recognizable actors playing very recognizable names (notably, Paul Giamatti as Ben Bernanke and Billy Crudup as Timothy Geithner), “Billions” is indulgently frothy—kinky sex, lush interiors and unabashed finance-bro dick-measuring. But while “Too Big to Fail” might do a better job explaining how the financial crisis happened to confused observers like Michele Davis, “Billions,” I think, does a better job of explaining why. I cannot say that the Showtime drama is necessarily brilliant, but it is getting at a human impulse that is implied but rarely stated throughout pop-culture and Wall Street, alike—the cloying, addictive power of wealth.

It's a follow-up to what Gordon Gekko did for the ‘80s. Michael Douglas won an Academy Award playing Oliver Stone’s iconic villain in 1987’s “Wall Street,” with the unforgettable catchphrase of “Greed, for lack of a better word, is good.” He was supposed to be the bad guy. But Gekko was so cool—so slimy, so rich and so venomously powerful—that at least according to reports from Douglas, Stone and costar Charlie Sheen, he became an inspiration for untold numbers of stockbrokers and finance bros. Stone had intended to create a monster, but Gekko turned out to be an inspiration, and "Wall Street," a  handbook for a certain kind of rapacious elitism.

In hindsight, Gekko was a warning sign that we didn’t quite understand. It wasn’t just that guys like Gekko existed and became filthy rich at the expense of the American economy, as Stone and his screenwriter Stanley Weiser made clear. It was that despite their machinations and their greed, they appealed to the audience. Stone had intended to create a monster, but as David Chase, Vince Gilligan and Matthew Weiner all discovered when they created Tony Soprano, Walter White and Don Draper, the monsters became unexpected folk heroes.

"Billions" comes into its narrative aware of this possible dynamic. Damian Lewis plays Bobby “Axe” Axelrod, a fund manager worth, well, billions—a kind of all-American hero, having miraculously escaped 9/11 by not being in the office that day and then pivoting from his working-class background to a life of preternaturally sharp market intuition. Axe lives in Connecticut with his beautiful wife (played by Malin Akerman) and their two blond children; they live in yuppie suburban prosperity. Axe’s whole life is a playground of opportunity; in the pilot, he swoops in to rescue his favorite childhood pizza parlor and impulsively decides to buy a $83 million mansion in the Hamptons—in both cases, mostly because he can. “What’s the point of having fuck-you money,” he says to the U.S. attorney, Chuck Rhoades (Paul Giamatti), “if you can’t say fuck-you once in a while?” He proceeds to deliver the epithet to Chuck, who is obviously fuming. But Axe has a point; he doesn’t need to compete with sophistication, because he can afford to be blunt and ruthless—to buy and discard battleaxes, every day, for the next thousand years. Showtime being Showtime, the drama eagerly delves into the sexual undertones of both men; Rhoades' sense of humiliation and inability to measure up, compared to Axe’s barely masked obsession with being the alpha male, the guy with the biggest metaphorical dick in the room. It’s reductive, but frankly, it’s not so reductive that it doesn’t make a kind of sense, too. With all of that money fanning Axe’s ego, he becomes pure id—lavishly providing for his family, seeking comfort, and winning dogfights, just because that’s where his instincts take him.

“Billions"' creators are concerned with cronyism and corruption, and one of the most interesting revelations of the pilot is that Chuck’s wife, Wendy, is a high-ranking employee in Axe’s firm (just as Paulson was the former CEO at Goldman Sachs, and Michele Davis went on to work for Morgan Stanley). But Axe’s lifestyle is just as repugnantly attractive as Gordon Gekko’s was in 1987. In one particularly inspired scene in the second episode, “Naming Rights,” Axe uses an extra $100 million to punish the grandson of a man who once docked him a tip when he was working as a golf caddy. There’s a kind of poetic justice to it, as Axe delivers a dressing-down in a symphony orchestra’s single nice conference room, clearly reserved for donors. But there’s a kind of insanity to it, too, a sense of privilege running amok. Most of us have to get over the times we’ve been treated poorly; most of us have had to learn that the world isn’t fair. Axe gets the satisfaction of seeing every jerk in his past get their due, but he loses, perhaps, an ability to gain some greater understanding or empathy about the world. But as he would probably say: Why does understanding matter, when you can buy victory? And to be frank, I would not entirely know how to answer.

“Billions” is indulgent. But in the landscape of Hollywood, it's surprisingly self-aware. Witness “Empire,” one of the most successful TV shows currently airing, about an infinitely wealthy family of record moguls. Or director Nancy Meyers’ oeuvre, populated by the affluent and set in their unbelievably beautiful houses—so much so that Vogue and Elle, among others, have pieces that guide the reader on how to “shop the look” of these interiors. "Billions" is crowded with photo-worthy set pieces, but it also justifies every expensive kitchen and bourgeois affectation with its subtext, like Showtime’s other drama, “The Affair.” It understands the physical presence of wealth and luxury; the ego-affirming perks of being able to wield it. It buys into the rich’s glamour and romance in order to demonstrate the breadth of the fantasy; it knows how hard it is to avoid the seductive call of billions.