Cracks in the Clinton coalition? Why some union members are flocking to Trump

Despite his plutocratic worldview, some union members are Trump-curious. Here's how Clinton can nip that in the bud 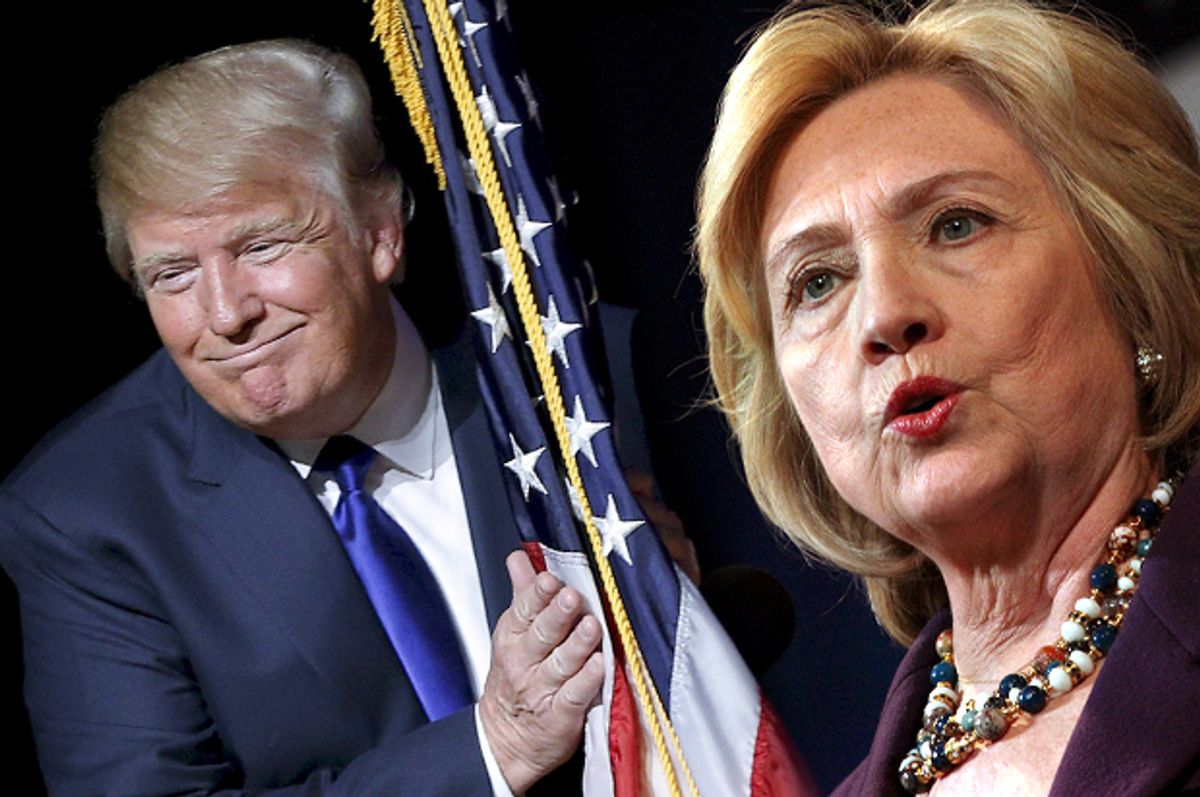 If Donald Trump ultimately wins the Republican Party’s presidential nomination — a scenario that it’s getting really hard to dismiss with confidence — he’ll head into the general election with more support from union members than any Republican White House aspirant in recent memory. Or at least that’s the worry among many union leaders and Democrats, according to a weekend report from The New York Times.

“We like that he does not support TPP, that he has taken the position that there should be trade tariffs for a company that moves jobs overseas,” one 30-year-old IAM member told the Times. “They feel he’s the one guy who’s saying what’s on people’s minds,” explained Thomas Hanify, the president of the Indiana state firefighters union. For these men and women, the Times says, Trump’s appeal is “manifold.” But, like his other backers, union supporters are drawn to Trump’s image of dominance and strength.

The source of the attraction to Mr. Trump, say union members and leaders, is manifold: the candidate’s unapologetically populist positions on certain economic issues, particularly trade; a frustration with the impotence of conventional politicians; and above all, a sense that he rejects the norms of Washington discourse.

To be clear, this does not mean that a hypothetical nominee Trump would win the majority of union members in a general election. He would still be lucky to get 40 percent of their vote, as even those who are most concerned about the Donald’s appealing to the rank-and-file will admit. But Trump doesn’t have to win the union vote in order to change the usual dynamic of a presidential election. Doing better than average — especially in Ohio, Michigan, Wisconsin and Pennsylvania — will suffice.

And while former AFL-CIO political director Steve Rosenthal is right when he tells the Times that the union-members-defect narrative is a staple of every campaign — and that it never really pans out — it’s not difficult to imagine that this time will be different. This is Trump, after all. Nothing about his campaign has gone according to plan (or at least not according to anyone’s plan other than his own).

It’s not just that Trump would be unusually well-suited to win union voters, either. It’s also that the most likely nominee for the Democrats, Hillary Clinton, is unusually poorly-suited to keeping union voters on her side and enticing those who drifted into Trump’s orbit to come back. She’s not only associated with NAFTA, the free-trade agreement pushed-through by a first-term President Bill Clinton. She’s also a Wall Street favorite. In other words: She’s losing the working class to Sen. Bernie Sanders for a reason.

It’s probably a smart move, then, for the Clinton campaign to to attack Trump in much the same way the Obama campaign attacked Mitt Romney in 2012, which a Politico report describes as the current plan. But while the point of hammering Romney’s business dealings in 2012 was to undermine any idea that he cared about workers, any such attack on Trump would need a different focus. As one White House aide tells Politico, Trump, unlike Romney, “never claimed to be nice,” so displaying his heartlessness wouldn’t work. It might even help.

The real way to undermine Trump, I still believe, is to attack what is far and away his greatest political asset: his aura of belligerence and strength. So regardless of what the specific policy debate happens to be in the moment, the approach is always the same. Do to Trump what he does to his opponents — make him look small, scared, impotent, and, above all else, weak. Challenge him to a show of strength when it comes to his knowledge of trade policy; not to prove he’s ignorant (his sympathizers don’t care), but to show he can’t back his braggadocio up.

Given her history, Clinton will have a tough time persuading fence-sitting union members that she’s focused on their best interest. People’s views of her are mostly fixed already; it’s hard to fathom what she could do to make such ingrained responses change. But if she can’t alter the way she’s seen by union voters, she can at least influence the way they think of Trump. They may not like her; but if they dislike Trump enough that they skip voting altogether, that, in the zero-sum game of electoral politics, is almost as good.