Donald Trump is a fraud: Report confirms the billionaire's presidential bid is a long and calculated con job 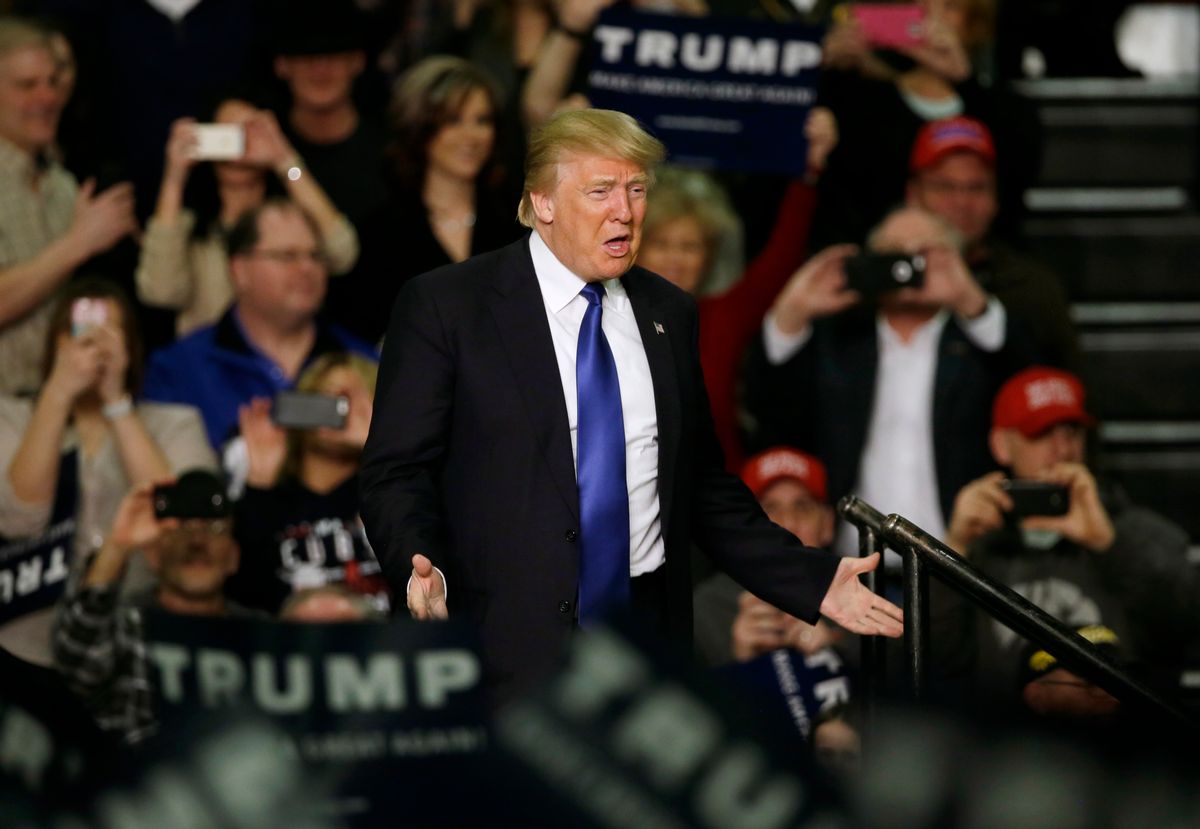 Donald Trump's presidential campaign feels whimsical, like a practical joke or publicity tour gone awry. But it turns out the Donald is running a long con. A new report in Politico suggests Trump has been plotting this stunt for years, and he knew exactly what he had to do to succeed.

According to the report, Trump was approached two years ago by GOP operatives who wanted him to run for governor of New York. To their surprise, he declined but added that they would be useful when he ran for president. “I'm going to walk away with it and win outright,” Trump told the group, “I'm going to get in and all the polls are going to go crazy. I'm going to suck all the oxygen out of the room. I know how to work the media in a way that that they will never take the lights off of me.”

Trump knew all along that his celebrity and media savvy were sufficient to support his campaign. Although they didn't believe him, Trump told the Republicans in that room in 2013 that he would dominate the race without spending much on paid advertising. From the report:

“'You can't run for president on earned media,' one attendee recalled telling Trump. The billionaire looked up, and paused for a long moment. 'I think you're wrong,' Trump said. 'Are you going to do all those little events at the Pizza Ranches?” another person asked, referring to the Iowa fast food franchises that are a staple of presidential campaign stops. 'Maybe a little,' Trump replied. 'But it's really about the power of the mass audience.'”

Trump was right. The ability to control the narrative, to dominate the coverage, is all it takes. Trump's amorality coupled with his gift for self-promotion has turned the Republican presidential race on its head. He's made the race about him, and anytime he isn't the main story, he lurches back into the headlines with an outrageous comment about women or Muslims or Mexicans or disabled people – anything to win the news cycle.

The biggest takeaway from the report is that Trump is indeed a professional huckster. And whatever else he is, he's not stupid. He doesn't believe half the absurdities he utters on the campaign trail either. As the report makes clear, everything he's done and said was designed to dupe the media into funding his marketing strategy.

Trump's a TV man; he understands the landscape. He knows interesting is preferable to informed or reasonable or lucid. Which is why he eschews talking points or scripts and instead riffs on stage like a stand-up. Trump's free-wheeling approach means he could say literally anything at any moment, and that's the kind of thing people want to watch. The bit about Mexicans being criminals and rapists, for example, was entirely improvised during Trump's announcement speech, and while it was an egregious thing to say, the sheer craziness of the remarks won him a week's worth of headlines and catapulted his campaign.

“Trump didn't foresee the furor his Mexico comments would generate; it was a reaction that built slowly and broke into a fever pitch,” Eli Stokols and Ben Schreckinger write. “But even if he didn't predict what exactly would kick off the media frenzy, he had planned all along to offer the media a candidacy it couldn't resist covering.” This is what Trump has done from the beginning: say something offensive, watch the media pounce, and allow the saturated coverage to fuel his insurgent campaign.

Trump's strategy is nearly perfect. On the one hand, he's tapped into a vein of resentment in the country, and in a way no serious politician could. And on the other hand, he's free to say whatever he wants, no matter how controversial, because doing so breathes more oxygen into his campaign. Even more advantageous, he's entered the race at an ideal time. The public — for good reasons — no longer trusts Washington. Trump is a hack who can't fix anything, but people make bad decisions when they're anxious or angry, and Trump is offering them an alternative to the status quo. This is what demagogues do, and it usually works.

As a candidate, Trump appears uncontainable. His risk tolerance is unmatched, and that gives him a freedom no other candidate enjoys. He can offend anyone, promise anything, and circumnavigate the entire process without ever having to apologize. Not apologizing, as the Politico writers note, only bolsters “a candidate who appeals to voters fed up with political correctness and establishment niceties.” It also forces the other candidates to play his game, to react to the tone he sets and the issues he raises.

Everything Trump does has to be seen in the broader context of his media-centric strategy. No one should ask if Trump believes what he says; it's impossible to know. If he does believe something he says, it's a happy coincidence, because his campaign is an experiment in modern marketing, not an expression of his political worldview.