Donald Trump denies he offended a staffer on the grounds he's above such behavior. It's easy to prove he's lying 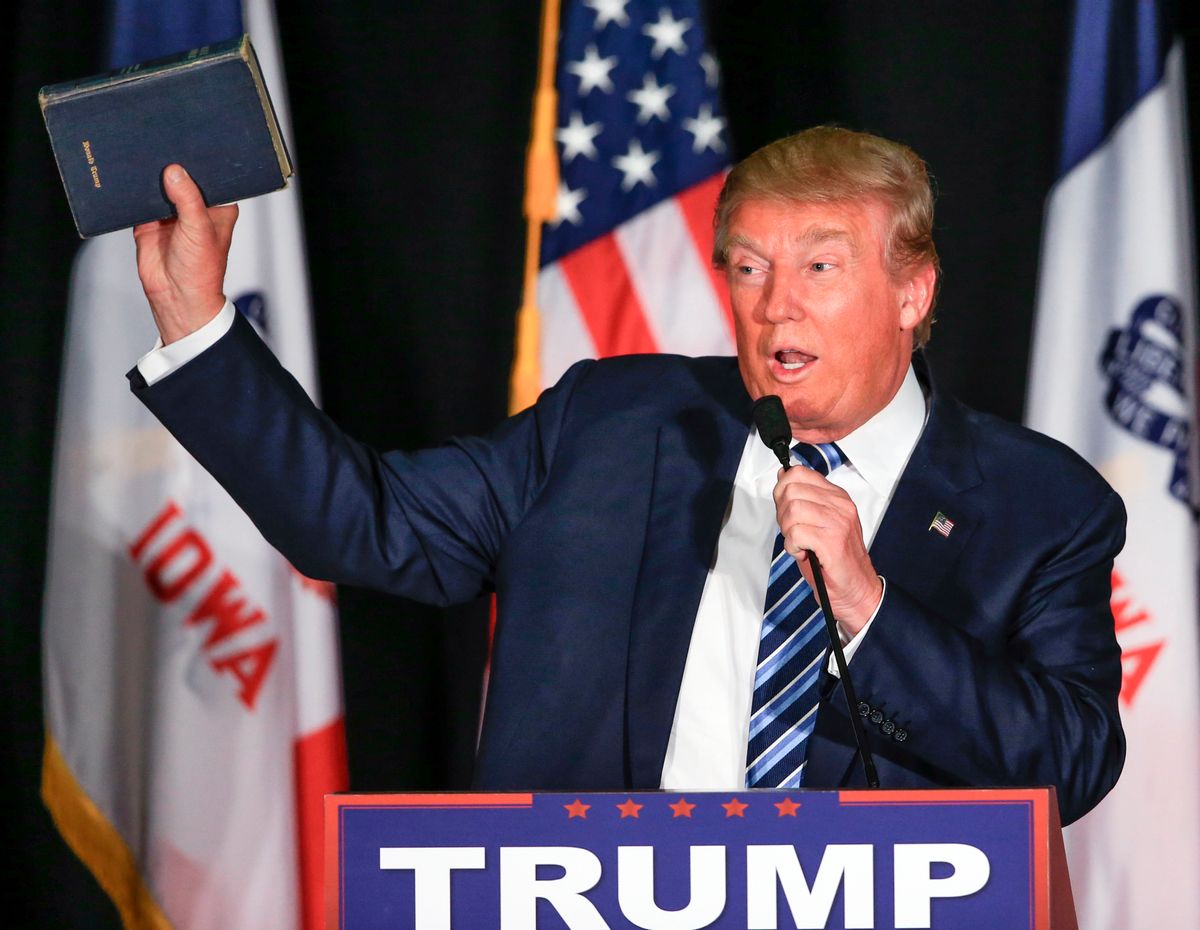 On the eve of the Iowa caucuses, Donald Trump's campaign is being accused of sex discrimination by Elizabeth Mae Davidson, who was a field organizer for his campaign in the state but has been since let go. Davidson says she's accused of saying nasty things about campaign leadership to the press, in violation of her non-disclosure agreement. Davidson, however, denies the allegations and says that men who did speak to the media were not punished. In addition, she alleges she was paid less than men with similar titles and hours.

But the juicy accusation that's getting the most attention is Davidson's accusation that Trump himself said something inappropriate to her and another female organizer. "You guys could do a lot of damage," she claims he told them according to The New York Times, which was a reference to their bodies and not their organizing skills.

Trump's defense is jaw-dropping: Arguing that it's preposterous to think he could ever say something reductive and objectifying about women like that.

"That is not the worst thing that could be said,” Trump told the Times. “But I never said it. It’s not in my vocabulary.”

Say what? Look, we can't prove one way or another if Trump said this to Davidson — and barring eyewitnesses or a recording, that's probably the way it will stay — but categorically denying that he would say rude things about women's bodies is preposterous, even by Trump's standards.

If anything, Trump's lengthy record of ugly comments about women suggest he doesn't get, or believe anyway, that women have any value outside of being aesthetically or sexually pleasing to men. He quite literally speaks of women as objects on a regular basis, in fact. "Beauty and elegance, whether in a woman, a building, or a work of art, is not just superficial or something pretty to see," he wrote in his 2006 book "Trump 101."

"You know, it doesn't really matter what [the media] write as long as you've got a young and beautiful piece of [expletive]," he told Esquire in 1991.

To Trump, women have sexuality and nothing else to offer. In his 1997 book, "The Art of the Comeback," he talks about marriage as if it's an expensive form of prostitution, where a wife is being paid for her services and the only thing to haggle over is the price:

The most difficult aspect of the prenuptial agreement is informing your future wife (or husband): I love you very much, but just in case things don’t work out, this is what you will get in the divorce. There are basically three types of women and reactions. One is the good woman who very much loves her future husband, solely for himself, but refuses to sign the agreement on principle. I fully understand this, but the man should take a pass anyway and find someone else. The other is the calculating woman who refuses to sign the prenuptial agreement because she is expecting to take advantage of the poor, unsuspecting sucker she’s got in her grasp. There is also the woman who will openly and quickly sign a prenuptial agreement in order to make a quick hit and take the money given to her.

This belief that women are basically living mannequins who have looks to offer and nothing else has informed some of his comments about professional women. He argued that women's successes on his show "The Apprentice," were "dependent on their sex appeal."

"Like you wouldn't have your job if you weren't beautiful," Trump told a female reporter in a clip featured on HBO's "Last Week Tonight with John Oliver"

His obsession with reducing women to their looks has even led to some gross comments about his own daughter. "Yeah, she's really something, and what a beauty, that one. If I weren't happily married and, ya know, her father," he joked to Rolling Stone.

"If Ivanka weren't my daughter, perhaps I'd be dating her," he told the hosts of "The View" in 2006. You know a man is far gone in the belief that women's only value is sexual if he struggles to imagine what his own daughter has to offer the world beyond being "for" dating and/or sex.

This belief that women's only value is their looks has deeply informed his feud with Fox News' Megyn Kelly, who seems mostly to offend Trump because she asks questions like a journalist, instead of reserving her energies for being pretty and flirting. He keeps calling her a "bimbo" and generally using her blonde good looks as evidence that she cannot actually be anything but a sex object.

If Trump thinks a woman's pretty, he's quick to tell her that's all she is. But with women he claims to find unattractive, it seems he thinks they have no value whatsoever. His long-standing, go-to insult to a woman who disagrees with him is to accuse her of being old or ugly.

When Gail Collins criticized him in The New York Times, he sent a letter with her picture that he labeled "face of a dog". He loves calling Rosie O'Donnell names, of course, and has denounced Bette Midler as "ugly" and Cher as "lonely." The implication is clear: Their criticisms of his ideas are invalid, because the only thing women are good for is being attractive, and they fail at even that, in his eyes. A favorite insult of his is to accuse a woman of failing to satisfy her husband, which is, once again, the only thing he thinks they are put on earth to do. In April, he retweeted a user who wrote, "If Hillary Clinton can’t satisfy her husband what makes her think she can satisfy America?" After the outcry, he deleted the tweet and blamed it on an anonymous staffer. But it's hard to imagine that's a sentiment outside of his wheelhouse, because he said almost an identical thing about Arianna Huffington.

.@ariannahuff is unattractive both inside and out. I fully understand why her former husband left her for a man- he made a good decision.

We can't know for sure what Trump did or didn't say to Davidson when he met her. But the idea that he would never say something reductive about a woman based on her looks is perhaps the most self-evidently ridiculous thing any candidate has said during this campaign, which is saying something.

Not that it likely matters, one way or another. If anything, Trump supporters seem to find it exciting that he runs around saying rude things that they are afraid to say because of what they like to call "political correctness," but the rest of us call "not being a creepy jerk."