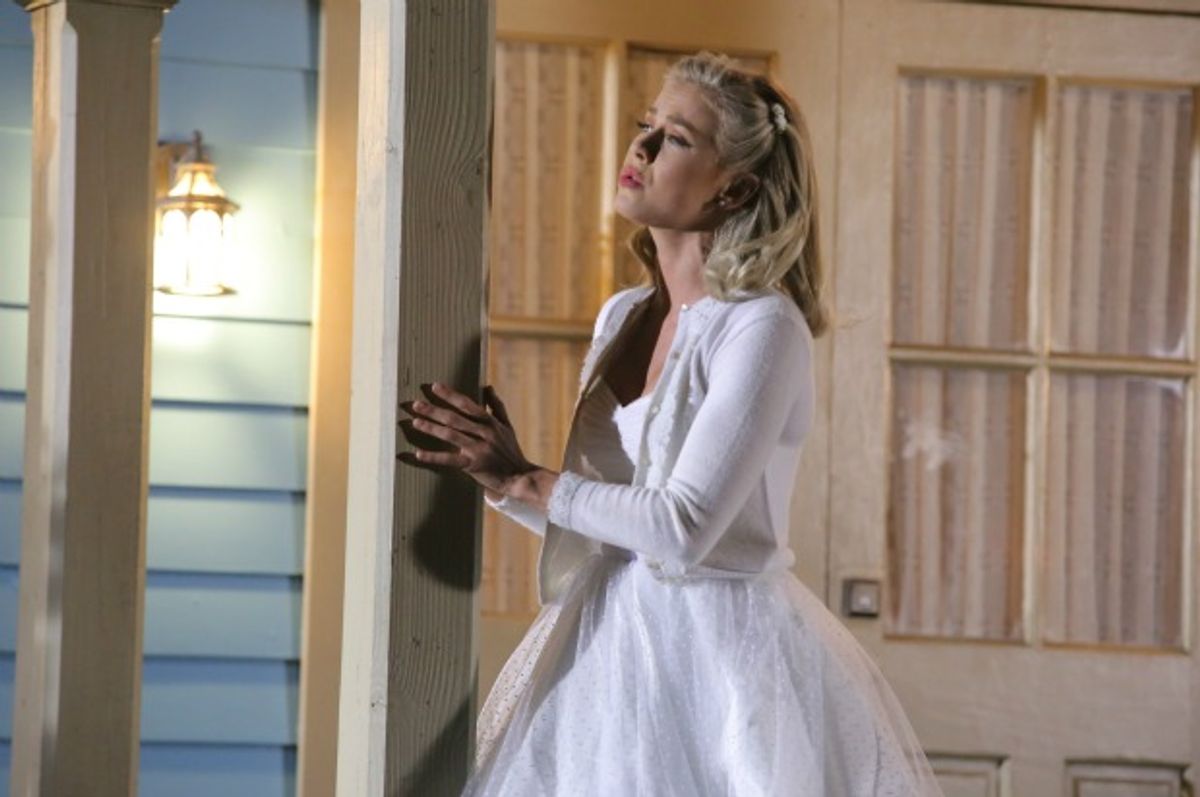 Last night’s “Grease: Live” wasn’t going to be able to be nearly as good as the 1978 film adaptation of the musical that imprinted John Travolta and Olivia Newton-John shimmying in all black into the minds of middle-schoolers everywhere. It didn’t help that “Grease: Live” bent over backwards to mimic the film as much as possible—the costumes, the blocking, and even the actors’ line readings; Vanessa Hudgens didn’t play Rizzo so much as she played Stockard Channing’s Rizzo with a little more eyeliner and kitten heels. The imitation reflected badly on “Grease: Live”—even its finest moments made one want to turn on “Grease,” instead, even though the original, too, is pretty flawed. By the time “Grease” became a film, the stage musical it was based off of had gone through numerous rewrites, losing the raunchy, illicit edge of the 1971 premiere for a more sanitized version that hit the right note of pop-nostalgia. Diluting that even more, as Fox did last night, came at the expense of a bit more coherence, as “Grease: Live” was so crammed with anachronisms—and so weirdly faithful to other things that should have been turned into anachronisms—that it landed somewhere between ‘50s time capsule and ‘50s themed-party, with some ‘50s-themed karaoke tossed in.

You know those Microsoft Surface commercials that are trying so, so desperately hard to convey coolness that they are animated with near-mania—an ethnically diverse and 20-something mania? “Grease: Live” is the Surface of TV musicals, right down to the surprisingly brilliant technical aspects covering up a kind of mediocre product. The direction of the TV musical was absolutely phenomenal—dynamic, immersive camerawork that both could do a wide-angle ensemble dance scene or weave in between gyrating couples for a layered, intimate effect. The fact that the cameras were doing all of that live only added to the magic. Most live events—football games, awards shows, even TV news—struggle to keep other cameras and lighting equipment out of frame as the programs quickly move from shot to shot. “Grease: Live” was directed like a Swiss watch, with every part moving in incredible harmony.

That planning extended to the people, too. The “Grease: Live” set, according to the behind-the-scenes looks that played during the bumpers to commercial, sprawled over 20 acres. The main cast had to travel between 14 different soundstages and 21 different set pieces in order to perform, mostly on glorified golf carts. This, too, proceeded without a hitch—and the viewing audience was treated to a few glimpses of the panic in action, with a behind-the-scenes spot showing Sandy (Julianne Hough) sprint from singing “Hopelessly Devoted To You” down to a waiting trolley that immediately screamed onto the pavement, at 19 mph, like a very slow getaway car. In addition to the 600 people comprising the cast and crew, the production also invited on set a live audience—excited fans who were shuffled into waiting bleachers or crowded onto pavement to provide both audience reaction and background extras in one fell swoop. It was a little “Total Request Live,” which was a bit jarring, but overall, it was difficult to deny “Grease: Live”’s energy or enthusiasm. Compared to, for example, NBC’s latest TV musical, “The Wiz Live!,” “Grease: Live” was a tour de force of innovation and immersion, a total redefinition of the theater-on-TV form.

But in terms of actual quality—things like sound tech, and lead talent, and adapting the various versions of “Grease” into a coherent script? “Grease: Live” blew the landing. The national feed lost sound for about 10 agonizing seconds in the middle of the musical’s biggest dance number, the Rydell High prom. There was audible static on Hough’s microphone for Sandy’s big ballad, “Hopelessly Devoted To You.” The singers’ voices never quite seemed loud enough, and the music section seemed a little rinky-dink—a little too much like a high-school orchestra pit’s rendition of the score for what was an otherwise blockbuster affair. And though certain side members of the ensemble proved to be adorable scene-stealers—including KeKe Palmer as a magnificent Marty Maraschino, Kether Donohue as pigtailed Jan, and Jordan Fisher as the guitar-playing Doody—Hough and Aaron Tveit as Sandy and Danny seemed a little rattled the whole evening, and couldn’t quite convey the charisma of Travolta and Newton-John. That may be because both stars were cast for their dancing—and indeed, as soon as they got a chance to hit the floor with the hand jive, their chemistry with each other and their ease in the performances ramped up considerably. But given just how many talented musical theater performers there are out there—and in the cast!—it was perplexing to find the center of the story so bland.

Equally perplexing is the case of the problematic line “Did she put up a fight?” which AdWeek reported last week was kept in the lyrics while a reference to girls “creaming” and a “pussy wagon” were rewritten. There is a high school version of “Grease” that rewrites the line to “Did you make out all night?” so it’s not like the crew behind “Grease: Live” lacked for alternatives. Given that Fox embraced the fantasy behind the music and cast “Grease: Live” multiethnically—diversifying the pre-desegregation Rydell High—it was confusing that some aspects of the ‘50s were being summarily rejected while others were being tacitly approved of. Every musical will have its own weird morality attached to it. But clearly, Fox knew enough to work around certain topics, and somehow still left a joke about date rape in a 2016 adaptation.

But overall, “Grease: Live” was a lot of fun. There were some poor decisions made by the producers, and some brilliant ones, too; the direction is mesmerizing, the choreography is unbelievable, and certain adaptive choices—like Boyz II Men as Teen Angel, or Carly Rae Jepsen as Frenchy—created space for new envisioning of old material. (Hudgens’ Rizzo was impassioned, if not exactly original; the actress is continually proving herself to have more talent. Hudgens announced on Twitter yesterday morning that her father died the night before from stage four cancer. But rather than leave it to the understudy, she dedicated the performance to her father, and certainly from watching her onstage, she seemed to radiate energy and determination. Stockard Channing might be proud.) A live television adaptation of a beloved musical taps into what makes both television and theater so compelling for their audiences—the buzz and snap of live action, the crackling energy of costume changes and bursting into song. At its worst, a TV musical offers the flaws of both mediums without the perks of either. But “Grease: Live” managed to convey the energy of theater, and the communal excitement of live television, with the same songs and dances that will old people grouse that the original was better and young people to obsessively learn the lyrics to “We Go Together.” It wasn't perfect, but it was delivered with great enthusiasm. Now I’m curious to see how the next TV musical can improve upon this one.