Wake up call for Republican elites: This time, their money isn't giving them what they want — Donald Trump's run derailed

Big donors are coughing up millions to Marco Rubio and Ted Cruz, but it's far from enough to take down Donald Trump 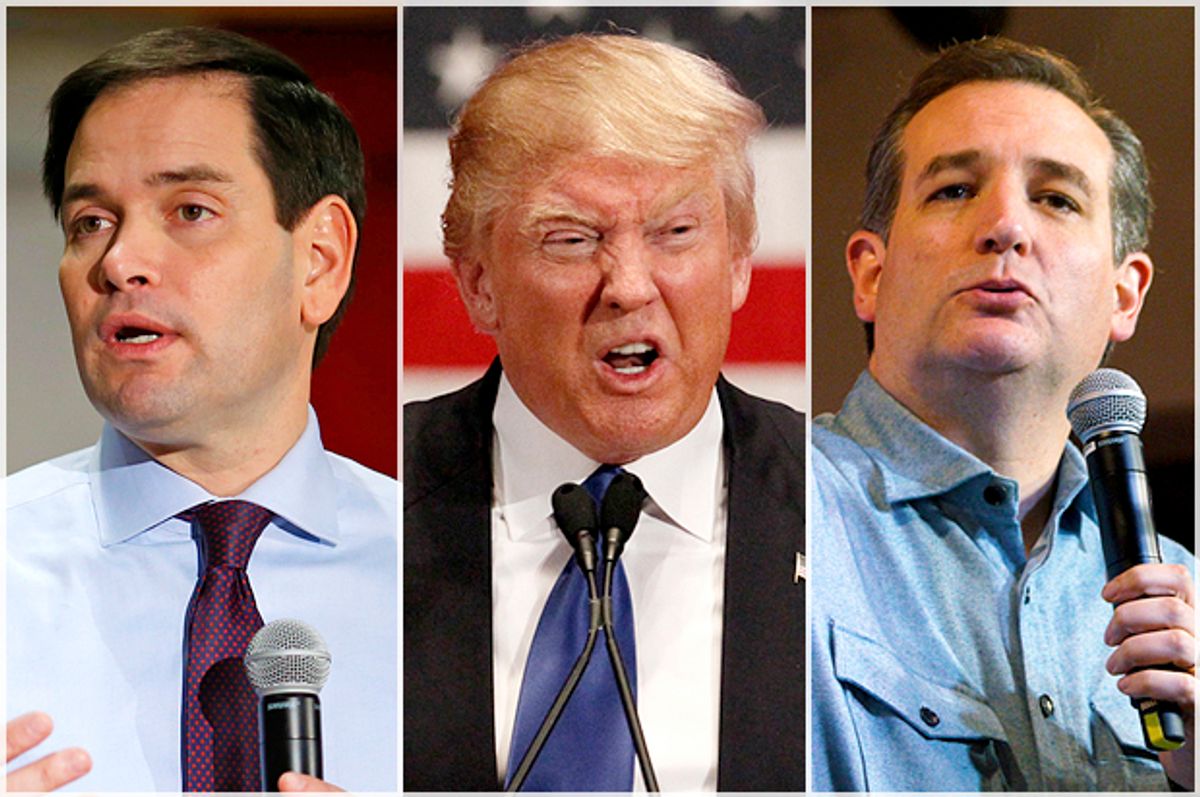 As we approach the Iowa caucuses tonight, Republican donors are now fighting among themselves in a last-ditch effort to salvage the presidential race. A report in the New York Times details how top GOP financiers share a goal (deny Trump the nomination) but are falling into one of two camps: Team Rubio or Team Cruz.

The Rubio backers, many of whom are Wall Street bankers propping up various super PACs, believe the Florida senator is the party's best chance to defeat Hillary Clinton or any other Democrat in a general election. This is the conventional narrative about Rubio, who has emerged as the last non-outsider standing on the Republican side. I've argued Rubio is a bad bet, but he's become the great establishment hope nevertheless. And the contributions prove it. The New York Times reports:

Normally, establishment donors uniting behind a candidate would swing the race in his favor, but this isn't a normal race. The anti-establishment fervor is real, as is the fear that Donald Trump will be the standard-bearer for the Republican Party in 2016. This climate has helped propel Ted Cruz's bizarre campaign, which in almost any other cycle would have died months ago.

Aware of the peculiar circumstances, Cruz has taken full advantage of the GOP's dilemma. And now he's amassed a collection of anti-establishment big money donors, which is undercutting Rubio's momentum. Cruz, the authors write, "has unleashed a new counter-establishment of conservative donors, some from outside the universe of traditional Republican giving They include wealthy evangelicals, libertarian businessmen, Israel hawks and other disenchanted by the party's nominees."

This dynamic is creating what one Republican fundraiser called a "civil war within the party." Conservatives are tired of milquetoast Republicans like Jeb Bush or Mitt Romney, but many of them also believe Donald Trump is a non-starter as a general election candidate. Thus a path has been opened up for Cruz, who is hardly more electable than Trump but is nonetheless a sitting U.S. senator. Cruz's relentless pandering has made him the only alternative to Rubio and Trump, particularly for right-wing ideologues who have fringe ideas but are not quite crazy enough to nominate Trump.

The net result of all this is a circular firing squad. In 2012, as the NYT points out, most of the Republican donors wrote "seven-figure checks" and "rallied behind a single candidate, Mitt Romney." Now, however, the race is completely up in the air, with Trump, Cruz and Rubio at the top and second-tier candidates like Bush and Christie still running attacks ads on the only candidate — Rubio — who may be able to beat Trump.

For party elites, this is a problem with no obvious solution. They need to throw their support behind a candidate who can win a general election, and that rules out Trump and Cruz. But the combination of Trump's mass appeal and Cruz's well-funded insurgent campaign is making that impossible. Complicating things is Trump's financial independence, which ensure his circus will roll for the forseeable future.

The only chance the establishment has is to convince Bush, Christie and Kasich — the remaining establishment hopefuls — to drop out of the race. Were that to happen, the party might be able to consolidate enough support for Rubio. But as this piece in Politico notes,  "the struggling trio of establishment candidates insist they little interest in dropping out any time soon - and, to the contrary, are mapping out long primary campaigns that will take them far beyond Iowa and New Hampshire."

So long as this holds, there will be just enough fragmentation in the party to keep Trump and Cruz viable. And while this may pump more money into the Republican race, it will be distributed too broadly to elevate one candidate over the other. That means the civil war will likely continue until the convention, at which point almost anything is possible.