Where are all the women in American film?

As an actor and a member of SAG, I have to ask: Why must we put a woman in a bathtub to give her a voice? 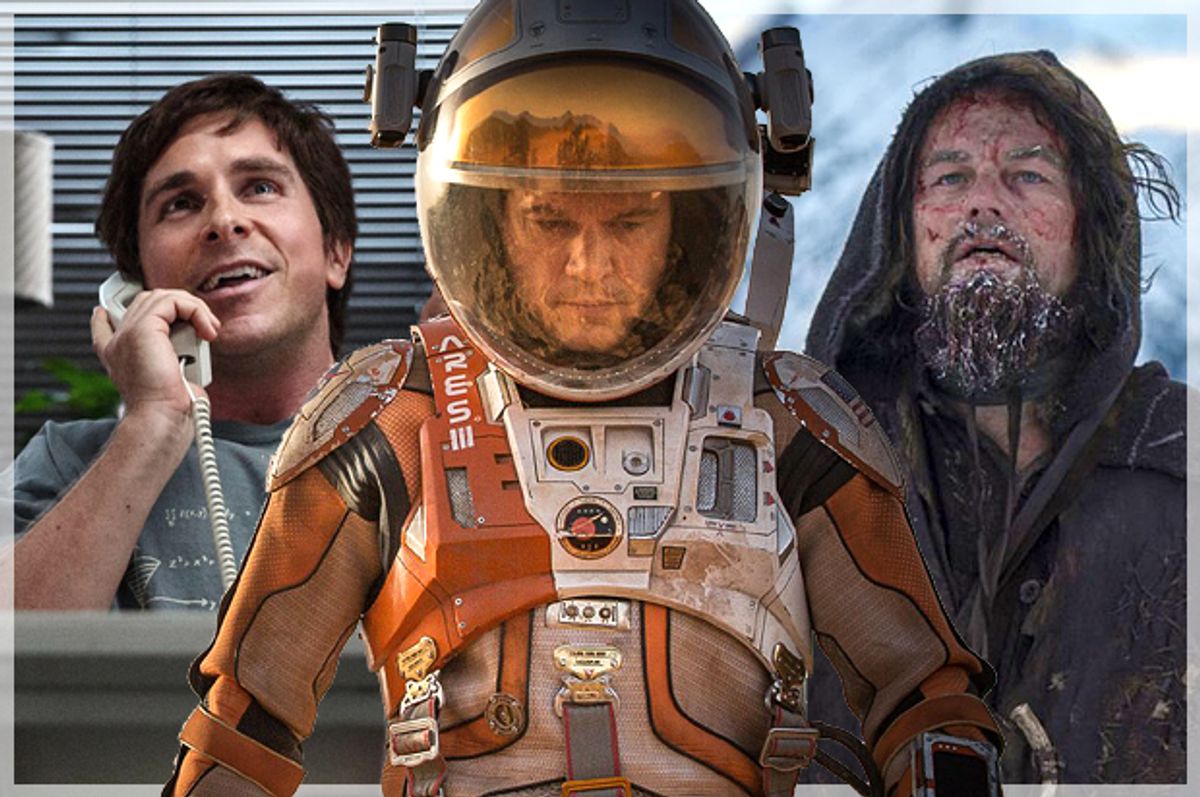 Christian Bale in "The Big Short," Matt Damon in "The Martian," Leonardo DiCaprio in "The Revenant"
--

I am an actress and a member of the SAG-AFTRA actors union. This year, I finally paid my dues on time, which made me eligible to receive the SAG-AFTRA Awards “screener” DVDs and vote in the awards. My husband is happy about that, because even though every time I put a movie on I have to click a button swearing I won’t share the DVD and that I will destroy it immediately after watching it, Claude watches the screeners with me. Piracy is not a victimless crime, but neither is being a dick in your marriage.

The first screener I watched was "Beasts of No Nation," a harrowing tale of boy soldiers in West Africa with knockout performances by Idris Elba and Abraham Attah. It affected me so much that I had to watch in two sessions; I turned it off right after the young soldier puts a bullet through the head of a young woman he thinks has bewitched him.

When I watch a movie, I ask myself: Which role could I play? (Or rather, my face set in a sour grimace, which role could I play if I had an agent who was doing anything for me.) In "Beasts of No Nation," there are two or three small speaking parts for women: a mother, who appears at the beginning; a crazy townswoman; the madam of a brothel; an aid worker who appears at the end. Women don’t feature much in "Beasts of No Nation." Mostly, they are there to be raped and murdered.

The second screener I watched was "Straight Outta Compton," another great film with a wonderful ensemble cast that tells the story of the rap group NWA, and is appallingly current in its depiction of the treatment of black people by police forces in our country. The hero is the powerful Andre Young, aka Dr. Dre, the coolest head and the moral compass of the group. At the beginning of the film, Dr. Dre has a wife and a young baby and an economic need to provide. This need drives the decisions he makes about the band. But shortly after the band signs with their new manager, the wife says she can no longer abide her miserable living situation, camping on a sofa in Dr. Dre’s friend’s house. She announces that she is leaving the crash pad to provide for herself and their child. The scene isn’t an “I’m divorcing you” moment; more that the realities of having a baby compel her to take a step. I got the sense she wanted Dr. Dre to be a part of her future.

Women aren’t essential to either film, except to provide regular T & A. You could cut the women’s parts and be left with essentially the same movie.

The third screener I saw was "Brooklyn." A sweet and superbly acted, if a tad cheesy (a slo-mo shot into a blown-out heaven of overexposed film as the girl walks though the door at Ellis Island), film about an Irish immigrant woman. With a woman at the center of the story, I considered what is the place of men in the film? The answer is: essential. Eilis, the heroine of the story, has two major love interests, both of whom have moving character arcs. She maintains a relationship with a priest who serves as mentor and guide, and he also develops into a strong presence. You could not cut the men from "Brooklyn"; you would be left without a story.

The fourth screener was the gripping "The Big Short," with riveting performances from every member of the cast. The first woman who appears on- screen is a stripper and the first woman to be featured as a speaker is a naked woman in a bathtub. The narrator, played with oily charm by Ryan Gosling, introduces her: “Does (banking terminology) make you feel bored, or stupid? Well, it’s supposed to. Wall Street loves to use confusing terms to make you think only they can do what they do. Or even better for you just to leave them the fuck alone. So here’s Margot Robbie in a bubble bath to explain.”

Margot Robbie, a pretty Australian actress, reclines in a luxurious modern white bathtub in front of a plate glass window with an ocean view. White pillar candles burn gently all around her. She drinks champagne from a flute. Every so often, a waiter in livery refills her glass. Her face is flushed, maybe both from the hot water, and from the alcohol. She’s smart and naked and drunk.

I turned to my husband, illegally watching the screener beside me. “Whoa,” I said.

Claude used to work in banking. He’s the first to say finance is a sexist, unpleasant world, where, at least when he was in it, it was normal practice for (male) bankers to meet and bond at strip clubs. Greed and domination, heedlessness and arrogance are hallmarks of the culture. Claude says we would all be better off if women played a much stronger role in the sector.

“It’s a sexist industry,” he said.

“True. And this is probably a really good depiction of that industry. I mean, it’s great so far. But this part isn’t about the industry. This is a narrative technique to get information to the viewers. Why does the woman have to be drunk and naked? In addition to being a totally gripping film about a sexist culture… is this a sexist film?”

I had seen four films, 75 percent of which completely leave women out of the story. But maybe women really don’t feature in West African war zones. Or in the history of NWA. Or in finance.

But of course we feature. It just depends what story you want to tell.

I was reminded of Virginia Woolf’s "A Room of One’s Own," where she looks back through the history books to try to learn what it was that women were doing in the past that prevented them from writing great works of literature. Her stunning discovery: Women were not mentioned in the history books. They were not essential to the story. In Woolf’s succinct phrasing: “(Woman) pervades poetry from cover to cover; she is all but absent from history.”

Of course, there are films about women. Many great ones. Are any of them, I wondered, films about women with no men? I googled it.  There are indeed, I learned, some films about women without men: 2008’s "The Women," for example. In the English language, that’s about it. Germany has a much bigger offering with Fassbinder’s 1972 film "The Bitter Tears of Petra Von Kant," as well as the lusty sounding "Mädchen in Uniform" and "Venusberg." But I wouldn’t say I was finding the female equivalents of "Goodfellas," "The Usual Suspects," "The Great Escape," et al.

In stories about women, men play a—wait for it—seminal role. "Pride and Prejudice" is a woman’s book, written by a woman, about women, but the engine around which it turns is Mr. Darcy. Even 2011’s famous women-centered "Bridesmaids," which supposedly proved to the industry that films about women could make bank, is full of … grooms.

Why can men ignore women, but women just can’t seem to ignore men?

I suppose it comes down to power. Think of it on a national scale: I am from Canada. Canadians all know that Canada is the USA’s largest trading partner, and who the president is. Canadians are regularly affronted by Americans’ total ignorance of Canada. Canada is looking to the USA for affirmation, because – although it is a magnificent and grand country with the winning Justin Trudeau at its helm – it is just not as powerful as its (smaller, in land mass anyway) neighbor to the south. Canadians think a lot about the USA. Americans don’t pay much attention to Canada.

Maybe it’s because women tend to have a wider perception than men – we notice more; our focus is out. We are empathetic; we are, in the words of Glenn Frey, programmed to receive.

For a few years I performed in a play directed by Irina Brook called "Shakespeare’s Sister," with text from the incomparable Marguérite Duras and from "A Room of One’s Own."  There were five women in the play. We made soup in a set that looked like a French country kitchen while discussing our experience as mothers and homemakers, as well as professional women. We sewed buttons on baby clothes, folded laundry, washed dishes, swept the floor. At the end, we served the soup to the audience, along with a glass of red wine.

During rehearsals, I kept waiting for the shoe to drop. When will the plot come in? When will something happen? The night before we gave the first performance, I realized that this simple showing of women at home doing “woman’s work” – was the plot.

My mother was going to come to see the play. I burst into tears. This play would be the first time she had seen her own life reflected back at her. As if her life were worth being depicted in a piece of art. As if it were enough. Through this play my mother, and, as Woolf says, “many other women who are not here tonight, for they are washing up the dishes and putting the children to bed,” would make history.

How can we put women back into the history that we are creating through the movies? Obviously, having more women in positions of power – more women directors at the head of major studio projects, more women writers penning big movies – should affect the balance. But "The Hurt Locker," the only film directed by a woman to win the Oscar for best picture (so far), features only one woman character who has a name.

It’s a larger question – the question of what we think constitutes a story. What is the history we wish to write about ourselves. When we tell a story about men, do we use women only for their sexual presence? Do we put a woman in a bathtub to give her a voice? Do we, as a society, as a world, consider women to have equal value to men?

So far, the record shows, we do not.

Today I cast my ballot for the SAG awards. Next year, if I don’t get banned for showing the DVDs to Claude, I hope there’ll be some more movies that don’t leave women out. They’ll get my vote.

Winsome Brown is a writer, director, and Obie award winning performer. Her most recent play This is Mary Brown debuted in New York City and internationally at the Edinburgh Festival Fringe this summer.