Coldplay’s eat-pray-love India: Their Beyoncé collaboration is even more insidious than cultural appropriation — and it's not the band's first time 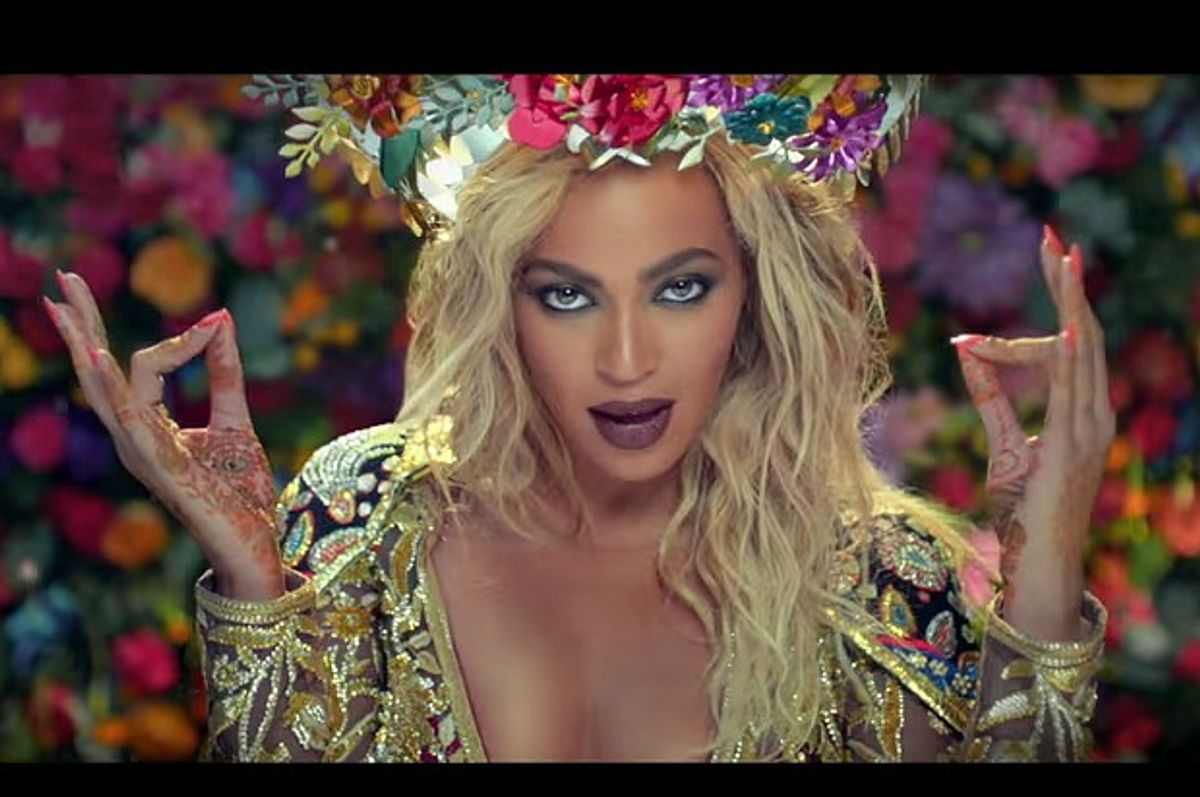 The British band Coldplay seems so determined to use its videos to melt eyeballs with white-guy stereotypes that it’s destroying whatever alt-rock cred it had left after creating its breakthrough album, "Parachutes." (“It's just easier on everyone to ignore any new music from them,” Julie Ju-Yeon Kang tells me, “since the only correct opinion of Coldplay is 'Parachutes' was good, but all other albums are the worst.)

In 2012, Coldplay collaborated with Rihanna to create “Princess of China.” Fans criticized that video for being a “tad racist” as well as mishmashing China and India into one fetishizing Orientalist trope. This time around, Coldplay has delivered itself to India, and dressed Beyoncé as a Bollywood goddess. The question is: Why does Coldplay keep positioning Black female superstars as fetishized Asians? As podcast host N’jaila Rhee asks on Twitter, do Coldplay’s band members “think they have to sneak Blackness into their videos with a haphazardly thrown together Asian appropriation blanket over it?” What’s going on here?

“Orientalism” is not just a particular position staked against the “Occident.” As argued by Edward Said, Orientalism is a “corporate institution for dealing with the Orient—dealing with it by making statements about it, authorizing views about it, describing it, by teaching it, settling it, ruling over it.” It wasn’t that long ago that India was a British colony. This form of Orientalism—call it Orientalism™--not only acts upon the “exotic” places and peoples it often claims to respect/revere/eat-pray-love, but regurgitates a fantasy Orient pre-chewed and ready to be consumed all over again. The first half of that process is the essence of kitsch, as defined in 1939 by art critic Clement Greenberg; the second half is the literal plot of the horror film "The Human Centipede," 2009, whose concept was so barf-bag brilliant that it spawned two sequels.

Said stressed that “the Orient” is not just there, a place and people ready to be consumed at the leisure of whatever power is trying to exploit it, but is created precisely because it is never allowed to have its own voice, to speak in its own languages, or to affirm its own perspectives, not even about its own inhabited realities. Instead, it is commodified as a product that, in India’s case, is often tied to a rhetoric of religious transcendence. If only Coldplay’s video had a fleck of the ironic self-awareness of the song’s title, “Hymn for the Weekend,” it might have been fun. Instead, it almost seems designed to illustrate How Orientalism™ Works, starting with the fact that doesn’t show “India” so much as it pays homage to a pseudo-spiritual, psychedelic, hippie, Leary-esque vision of India that burst into Occidental (Western) consciousness during the ‘60s thanks to a little British act called the Beatles.

Beatles who? Coldplay has not only eclipsed them in all-time popularity but also, according to Kanye West, musical genius. Kanye thinks Martin’s more talented than John Lennon. If nothing else, chagrin over Coldplay’s dominance has produced a lot of hilarious music criticism.

“For decades,” Rowan Pelling wrote sadly for the Telegraph, “British rock lovers could rest safe in the knowledge that 'Sgt Pepper’s Lonely Hearts Club Band' would head any pop poll, satisfying traditionalists and iconoclasts alike with its incontrovertible genius. This, after all, was an album that sent the tone for an entire decade, not just musically, but sartorially and socially, with its undercurrent of turning on, tuning in and dropping out. Coldplay’s subtext, by comparison, is more akin to the kind of muted woe you feel when John Lewis [an upmarket UK department store] takes a week longer than expected to deliver a sofa. No wonder Creation records boss Alan McGee once dubbed it bedwetters’ music’.”

Pay attention, and you’ll start to notice that the criticism tends to raise a theme that, nicely, we’ll call disdain for things that get watered down. Others are more direct:

With each successive generation, as the imperative to serve the commercial machine become ever more opprobrious, creative daring and artistic risk get replaced by sequels, reboots, and the soothing hum of nostalgia masquerading as newness.  “When you take a closer look at India,” the director of the video, Ben Mor, said, “surrealism and psychedelia immediately come to mind, at least to mine.”

Well, yes. But India = surrealism + psychedelics didn’t arrive in his mind all on its own, but rather via John, Paul, Ringo and George, who went Columbusing a generation earlier in a groovy Yellow Submarine and made Ravi Shankar the soundtrack for the Age of Aquarius.

As Sandip Roy noted for the Guardian, “Chris Martin finds Technicolor and he becomes in the end, if not a person of colour, at least a more colourful person.” I suppose one ought to be grateful Martin didn’t attempt to play Michael Jackson, but I kept on thinking of that Skittles commercial where the two awkward white teenagers break out in a weird case of candy zits. Taste the, uh, rainbow?

What about Beyoncé? Her role in this is considerably more complex because Queen Bey is The Woman in this visual tale. She is shown though various frames—through windows, on billboards, on screens—setting her off as a manufactured construct designed to sell things, including music to the masses. To a certain degree, this distancing protects her because it delivers her as a pre-packaged advertisement. Nonetheless, to some viewers, as East Indian writer Swati Avasthi observes in an email to me, Beyoncé’s participation is more hurtful than Martin’s cluelessness.

“Beyoncé is supposed to be an Indian Bollywood star,” Avasthi notes. “She clumsily attempts traditional Indian dance without seeming to understand any of its significance. (The hand positions, which are important in traditional and are often a method of storytelling Indian dance, are not replicated faithfully here.) She is dressed up in too-sexualized-to-actually-be traditional Indian costumes, wearing traditional Indian jewelry, with Mendhi adorning her hands in one of her costuming changes. And her role? To be the object of the white man's gaze.”

At one point, we watch Chris Martin watching her image onscreen.  That’s more Orientalism™, giving us lessons in how to correctly gaze upon the unavailable fantasy woman in video set in India yet flunks the new DuVernay test. Avasthi also points out the lack of contextualization for the celebration of Holi shown in Coldplay’s video. “While the lyrics are about angels,” she notes, “the images are about a traditional Hindu holiday that, ironically, emphasizes equality.”

Perhaps to forestall criticism, the Coldplay video includes a cameo by Bollywood star Sonam Kapoor. Daughter of Anil Kapoor, she is not as famous as Priyanka Chopra or Aishwarya Rai but is nonetheless a major star — she’s like the Kate Hudson of India, The Aerogram editor Rohin Guha explains in an email to me. Guha notes that Kapoor “easily could have stepped into the Bollywood demigoddess role Beyoncé was dolled up for and the video wouldn't have come across nearly as disrespectful or offensive as it did. The fact that Kapoor only earns a couple seconds of screen time sends a message that a Westerner's idea of desi culture matters more than desi culture itself. While I believe Beyoncé has produced an incredible body of work, Bollywood is a big deal...honestly, Bollywood is bigger than Beyoncé.”

Coldplay might want to remember that popularity is not a measure of greatness, and selling millions of records is now a better measure of your marketing team's skills than a reflection of musical achievement. In closing, I will remind the band of another act that was “no.1 in England for more weeks than Elvis and the Beatles!” His name was Slim Whitman. Dunno, but I kind of see a resemblance.