Donald Trump's a proud a**hole: The big flaw in the Democrats' planned assault on the GOP front-runner

Democrats prepare to attack Donald Trump as a heartless, cutthroat capitalist — an image he embraces and exploits 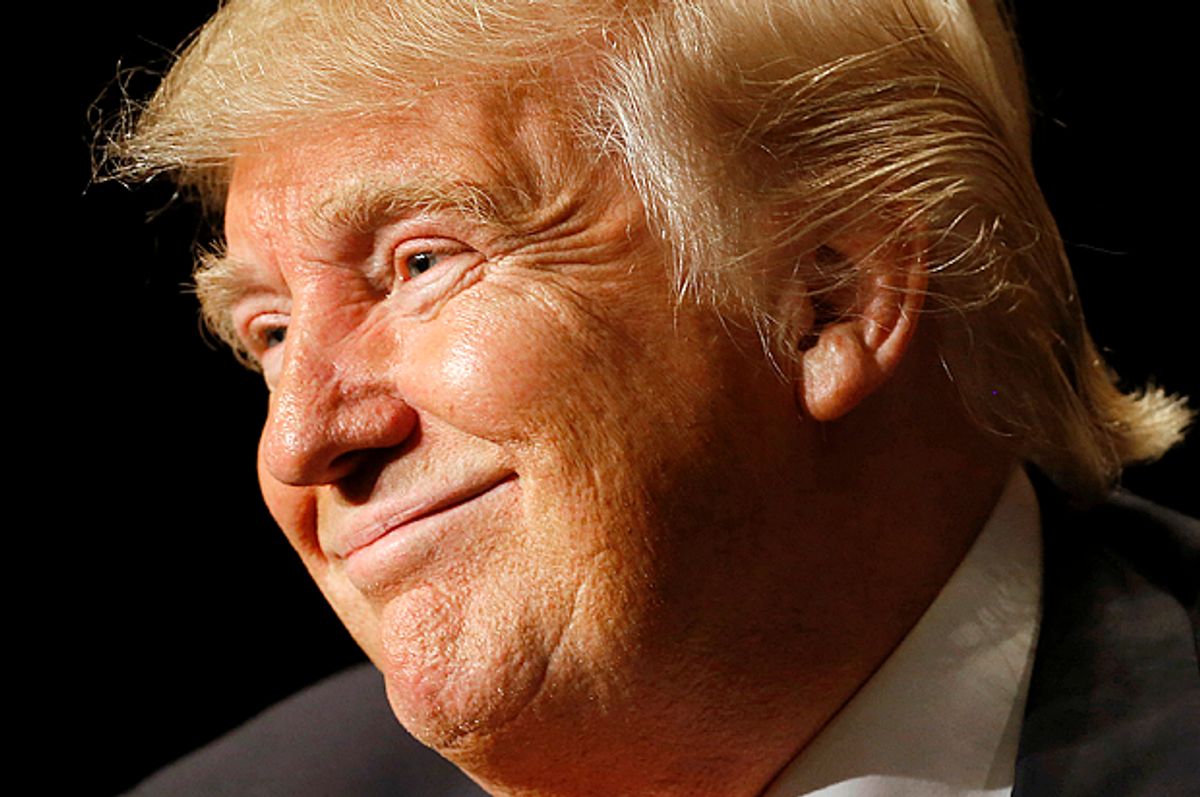 The Iowa Republican caucus is this evening, and if the polls are to be trusted, we’re very likely to witness the first, thoroughly remarkable step toward a destination so many of us thought was unreachable: 2016 Republican presidential nominee Donald Trump. Trump’s main competitor in the state, Ted Cruz, is stumbling. The next closest candidate, Marco Rubio, is a distant third. Everything seems to be coming up Trump – assuming he can get his supporters to turn out.

As Politico reports this morning, the Democrats are taking seriously the notion that Trump will be the Republican candidate and are duly collecting opposition research and prepping their lines of attack. The gist of what they’re planning is to paint Trump as a next-level version of the 2012 hit on Mitt Romney – a heartless capitalist whose business decisions have hurt people:

The emerging approach to defining Trump is an updated iteration of the “Bain Strategy” — the Obama 2012 campaign’s devastating attacks on Mitt Romney’s dealings with investment firm Bain Capital, according to a dozen Democratic operatives and campaign aides familiar with the accelerating planning inside Clinton’s orbit. This time, Democrats would highlight the impact of Trump’s four business bankruptcies — and his opposition to wage hikes at his casinos and residential properties — on the families of his workers.

As the Washington Post’s Greg Sargent writes, this line of attack suffers from being right, but in the wrong direction. Trump’s appeal is rooted in his promises to do unspeakable violence to the existing political order, he writes, and so “it’s unclear whether painting Trump as a con artist and a predatory capitalist would be enough, at least with a certain segment of voters.” He’s right, and I think this approach could actually backfire somewhat.

You have to be very careful in how you go after Trump. The attacks on Romney over his Bain Capital days were effective because Romney had presented himself as a genial, good-natured Mr. Fix-It who knew how to run a business and create jobs. In that light, pointing out that his company invested in businesses that outsourced jobs was a stinging hit on Romney’s image. Trump, on the other hand, revels in the cutthroat nature of business – he’s most famous for telling people that they’ve been fired – and his image is built around the idea that he’s a tough and impossibly shrewd businessman. To that end, he uses the politically thorny aspects of his business record to his advantage.

Take China, for example. Trump lashes out against the Chinese constantly and complains that they’re screwing us over and says he’ll be so tough on China that all the jobs will come back and yadda yadda yadda. The obvious retort to all this is that Trump-branded products are made in China, and that Trump is contributing to the ruinous economic advantage that he says China currently holds over us. Trump won’t deny that – he’ll embrace it and then flip it to reinforce his own message. Here’s what he wrote in "Crippled America" on this very subject:

I know from my own experience that this is a difficult problem. The Chinese are very savvy businesspeople, and they have great advantages over our manufacturers. I’ve had several Trump-brand products made there.

That’s a good example of the difference between a politician and a businessman. To stay in business I have to be smarter than my competition. I could make a very important point if I refused to have my goods manufactured there.

As long as we’re playing under these conditions American companies don’t have a choice. Third-world countries have substantially lower production costs. They have lower overhead and pay their workers a lot less. As a businessman, I have an obligation to all of my employees and to consumers and stockholders to produce the best product at the lowest possible price.

However, as a matter of global policy, we want to take away China’s advantages.

See what he did? He took a line of attack against him – that he’s a hypocrite for railing against Chinese companies stealing American jobs – and twisted it to make himself seem smart, cunning and responsible. You can scoff at the warped logic and internal inconsistencies (he says he’s outsmarting the competition by working with China but also says he doesn’t have a choice), but Trump has a knack for selling this stuff. Just a couple of weeks ago, South Carolina Gov. Nikki Haley made headlines by unsubtly suggesting that Trump was one of the “angriest voices” in her party. What did Trump do when attacked like this? He accepted the designation with pride and used it to reinforce his own message.

That’s why I’m dubious about this line of attack from the Democrats on Trump’s economic record. They’re essentially planning to call him an asshole, pointing out that he cost people their jobs and refused to give them raises. “He’s a landlord,” one Democrat told Politico. “Everybody f---ing hates their landlord.” The problem is that a lot of Trump’s appeal is based on the fact that he’s an asshole. He embraces it and he’s good at spinning it as a sign of toughness, and the Democrats should be wary about helping Trump make his point for him.