Jeb's New Hampshire dilemma: Going through Marco Rubio (and the rest of the party) to play spoiler

With the GOP establishment warming to Rubio post-Iowa, Jeb Bush could derail him in New Hampshire 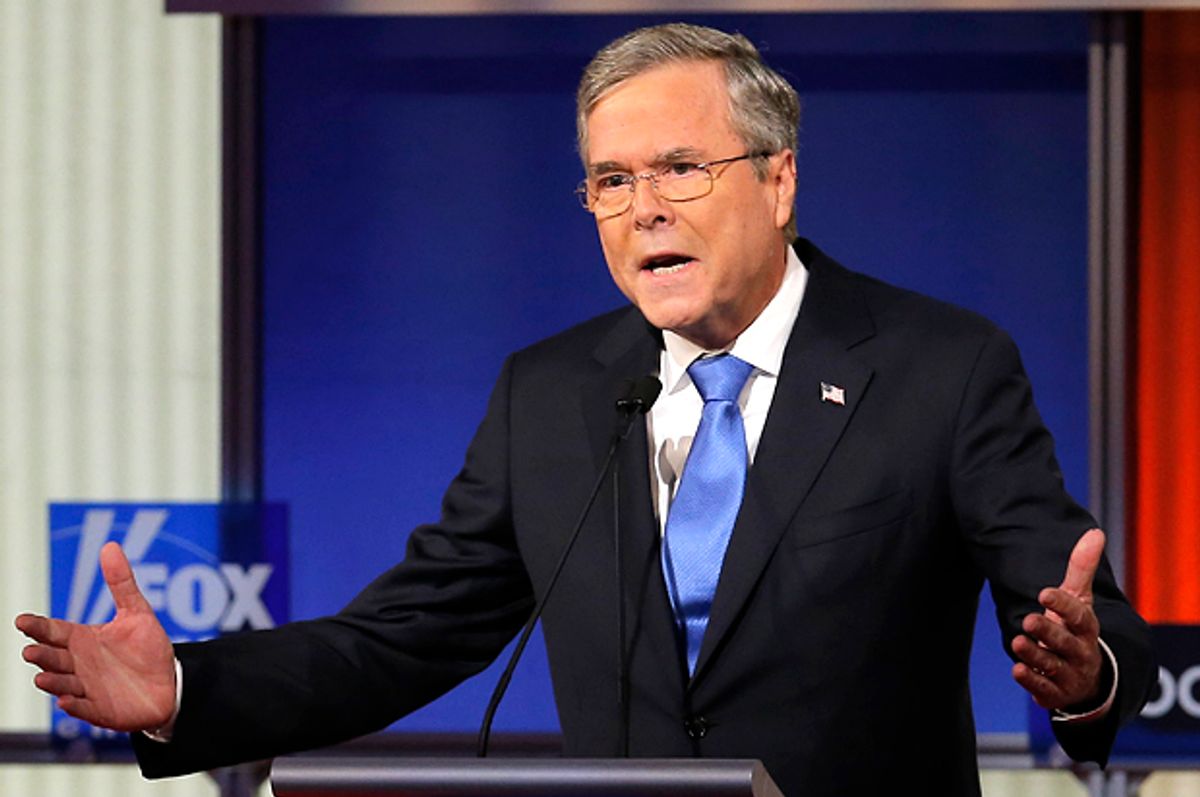 The planar, snow-draped hellscape of democracy known as “Iowa” is officially behind us. The big story coming out of the Republican caucus is Ted Cruz’s victory over Donald Trump, which defied the polling averages and gave him credibility as the anti-establishment candidate of the GOP race. But that, of course, is not what establishment Republicans want to talk about. They’re far more excited over Marco Rubio’s surprisingly strong third-place finish, and would much rather you talk about the staggering, uncontrollable momentum Rubio has picked up by taking the bronze.

Eh, whatever. I’m focusing on Jeb Bush. Yeah, him, the “Macbook Pro, baby” guy. And not because he did especially well in Iowa – in fact, he performed abysmally, taking in just three percent for the evening and barely edging out walking campaign finance violation Carly Fiorina. For that pitiful level of support, his campaign and super PAC shelled out over $14 million dollars in ads, which translates to roughly $2,800 per vote received. Jeb got thumped.

But as the race shifts to New Hampshire, Jeb stands out as one of the more interesting and tragic figures in the race, given the ascent of Rubio and the stirrings of an establishment consensus behind the young Florida senator. Bush’s position in New Hampshire is considerably stronger than it was in Iowa – he is, for the moment, tied with Rubio in the polling averages, and he’s actually gotten a little bit of a bounce in the past couple of weeks. Jeb knows that what slim chance he retains in this race rests on an unexpectedly strong performance in New Hampshire, and the only way for that to happen is for Rubio to sustain significant damage. That’s why Jeb’s super PAC, Right to Rise, has been firing off salvos of anti-Rubio ads for the past several weeks.

All that negative advertising churned up some grumbling from Republicans who worried that Jeb was tearing down Rubio to the benefit of candidates like Cruz and Trump. But now that Rubio has been anointed by the media and party elites as the non-winning winner of Iowa, there’s going to be intense pressure on Jeb and his political orbit to lay off Rubio for “the good of the party.” The Rubio team is already aggressively pushing the argument that the senator’s establishment-favored rivals should stand down. “If you don't want Ted Cruz or Donald Trump as the nominee, you better get onboard with Marco Rubio,” a Rubio spokesman said last night. Basically, they’re going to ask Jeb to throw in the towel.

From a practical standpoint, this makes no sense: Jeb wants the nomination, Rubio stands in his way, and he has the resources to try and bring Rubio down, so why wouldn’t he? That leaves Jeb in a sad, thoroughly Jeb-like position: he’s clinging to the last, desperate hope he has of becoming president and running the risk of tarnishing the family brand even more than he already has by playing spoiler for the candidate the party actually wants. If Rubio struggles in New Hampshire, it will be Jeb who absorbs a good deal of the blame.

The irony in all this is that if Jeb does tear Rubio down, he’ll be hurting the one candidate who arguably is best positioned to return Bush-style Republican politics to the White House. As The Week’s Michael Brendan Dougherty wrote Tuesday morning, Republican elites love Rubio so much because he embraces the GOP’s policy platform from the last 15 years and pairs it with a politically appealing personal story. “Rubio's candidacy is essentially based on the premise that nothing from the George W. Bush era has to change for the Republican Party.” That’s what Jeb wants too, but he has the misfortune of actually being a Bush.