The generation gap looms large, with the old guard GOP against any drug-law changes. Jason Vaughn isn't giving up 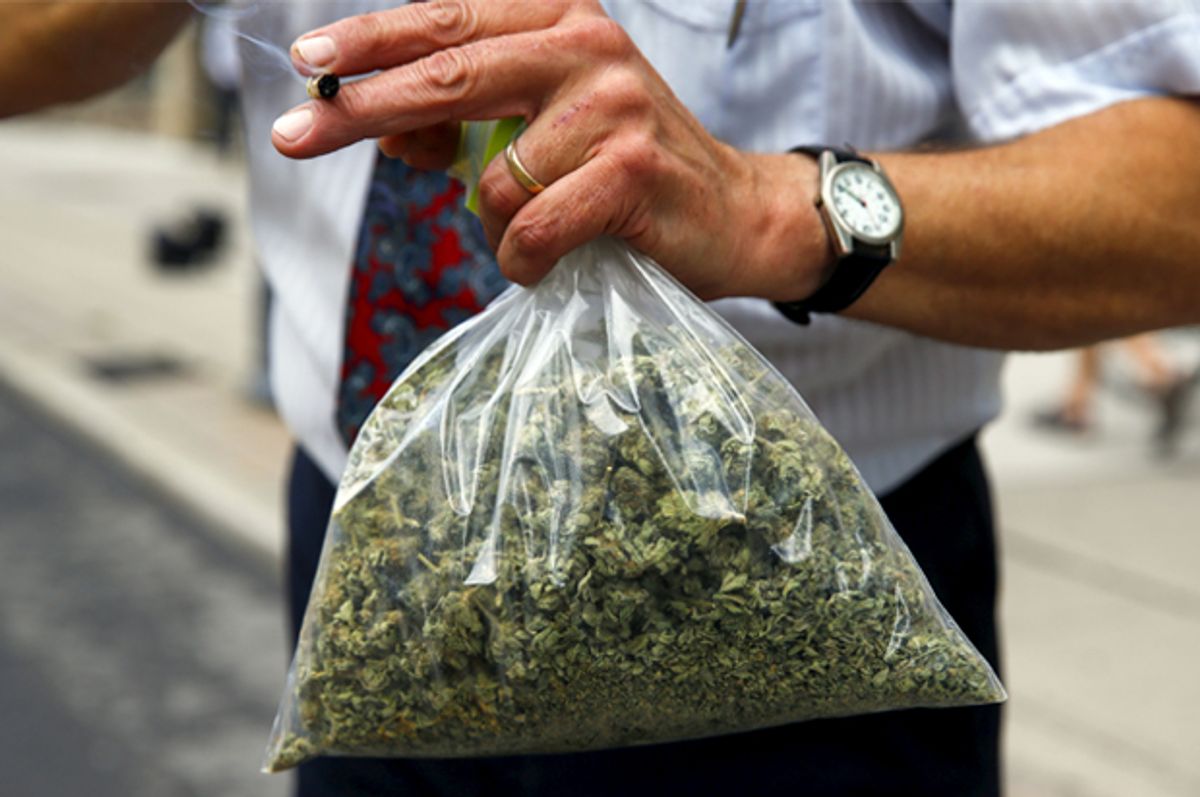 "Prohibition will work great injury to the cause of temperance...It goes beyond the bounds of reason in that it attempts to control a man's appetite by legislation and makes a crime out of things that are not crimes. A Prohibition law strikes a blow at the very principles upon which our government was founded." —Abraham Lincoln

The only thing surprising about the rising wave of Republican support for the loosening of cannabis laws is that it's taken this long. Ever since conservative stalwarts like Milton Friedman and William F. Buckley famously declared prohibition to be antithetical to conservative values, the intellectual cover has been available to young Republicans, but only in the last decade did their support swing sharply upward.

Even as leaders in the national Grand Old Party like Jason Chaffetz make threats against the District of Columbia's loosening of cannabis laws by saying “move forward at your own peril,” a recent poll found that 63 percent of young Republicans of the millennial generation support marijuana legalization.

I found a ready example of a pro-legalization Republican at the Drug Policy Alliance conference recently in DC when I met Jason Vaughn of Republicans Against Marijuana Prohibition (RAMP), a pro-life gay Texan and the only known paid Republican activist for cannabis legalization. Vaughn's start in the movement began after David Simpson, the state representative in Texas who wrote the Christian case for drug law reform, introduced a bill for full legalization with no restrictions, the so-called “tomato bill.” Vaughn's first exposure to the nuts and bolts of legislation fascinated him and he sat down with Simpson to learn more.

Vaughn explained that “because I worked in various pro-life legislation but had always been supportive of cannabis, I had been quiet because I didn't want it to ruin my other life. But then David Simpson made a comment that I now use all the time: 'Pray that the legislators will have the faith of their convictions instead of the fear of their constituents.'”

This phrase gave Vaughn the impetus to write, "A Pro-Life Defense of Marijuana Legalization," an essay that went viral and got him invited to several cannabis panels. He impressed the audiences with his knowledge of the legislative bill and caught the eye of someone with RAMP. They soon hired him to be their membership coordinator.

At this Republican cannabis legalization organization, Vaughn got to work with their founder, Ann Lee, a powerhouse octogenarian activist and mother of Richard Lee, the founder of Oaksterdam University. Inspired by her wheelchair-bound son, she now tells fellow Lone Star Republicans to "Just say grow." She makes quite a stir at the drug conferences, an outspoken grandmother helping to lead the conservative wing of the cannabis movement. As she told the Washington Post, “It disturbs me greatly that Republicans would distort the principles of small government, fiscal responsibility and personal liberty in such a way that they could support the failed principle of marijuana prohibition any longer.”

This Drug Policy Alliance conference was Jason Vaughn's first of this kind. His sign read Republicans Against Marijuana Prohibition, which prompted remarks from the left-leaning attendees like, “Normally I hate Republicans, but I'm glad you guys are here.”

Such comments are a reminder that close-minded partisanship exists on both sides of the aisle and that this movement is more diverse than just liberals and medical patients. Money against prohibition flows in from sources as far apart on the political spectrum as George Soros and the Koch brothers. As Vaughn observes, “People don't realize how vast it is. If they only pay attention to a certain media that leans a certain way, either right or left, you'll miss the other side.”

Vaughn's first field of ministry began by working at a drug recovery center. “Marijuana was not the reason for anybody to be there. Alcohol was considered the gateway, but the black market is the real gateway drug. A market principle is that if I'm going to Walmart, it's their job and duty to try and to get me to buy me other things. That's a basic principle. A drug dealer will act in the exact same manner.”

One of the points he's found that most resonates with fellow conservatives is that the black markets cause our communities to be more unsafe. In addition, there are negative consequences like the rise of spice, the synthetic cannabinoid(s) increasingly seen at harm reduction centers across the country as well as often being used as a hammer by city cops looking to clear streets in a manner similar to the enforcement of the crack laws. As Vaughn repeats often, “Stop putting people in jail for a plant.”

“Most people want some form of restriction on who gets access to medical marijuana but we believe in medical freedom and doctor-patient rights.” He believes the easiest bill to pass in his state's current political climate would be a clear and easy piece of legislation allowing moderate medical access and a decriminalization of possession with $100 fines that steadily increase until a third strike sends the violator to jail.

RAMP wants to go further than that by advocating for full legalization. However, in the fisticuffs of state politics, “when you're talking about bills, what actually matters is what voters actually show up.” Usually that's only 10 percent of the potential electorate — so with only 5 percent support, you can probably get a bill through. Most representatives in Texas don't need to worry about the general election because gerrymandering already decided that part.

“You only care who votes in your primary and some people are crazy," Vaughn says. "We have a candidate being attacked because at 18, he posted on a forum about wanting a smoke buddy. He will still win handily because he's the second most conservative candidate in Texas, but it shows we still have long way to go.”

In a state where a joint can land you a 180-day sentence, many conservative politicians agree that the cannabis restrictions represent a misuse of government resources and are patently offensive to civil rights. But even with 55 percent support within the state for some kind of loosening of the laws, most Republican politicians will still only state their agreement behind closed doors.

Within the party, there is a split between the libertarians of the Tea Party, who stand against any increases in government regulations and the more mainstream Republicans — liberal by Texas standards but quite conservative compared to the rest of the country — who want to combat any drug problems with more laws. The more centrist wing of the Republican Party is more resistant on the cannabis issue. Basically, they would rather duck the whole mess.

“That's the real difference between the wings of the party: those who want to do something versus do nothing," says Vaughn.

Vaughn defines the Tea Party members like himself as those who sees the very best example of a politician as one who does nothing, because “you piss off the least number of people when you do nothing.” It's the ranking Tea Party members of the state legislature who introduced the “hands-off” decriminalization and legalization bills — though these never got to the floor for a vote.

But more than the politics within the party, it's the generational gap that looms large. The bedrock conservative principles of small government and personal freedom undergird much of the young conservative support for loosening cannabis restrictions, but they're muzzled by the old-guard Republicans and the state party's official position of no change on the drug laws. Vaughn sees much more of a united front within the younger generation because in the elders, there exists a much more heated adversarial air with conservatives on the opposite side of the party getting smeared with pejoratives like RINO (Republican in name only).

RAMP is not allowed to endorse specific politicians, but members can share their views and be involved at the state and local level to change the conversation though sometimes their tactics differ from fellow travelers. For instance, Dallas was considering a cite and release program which Vaughn calls, “a step in the right direction though fines for this offense are still ridiculous. So NORML comes out and has a parade covered in pot leaves.”

You can almost hear him shaking his head over the phone. “I have no problem with this. You do you. But it's all about propaganda and this is not the way to convince the ones in the middle.” Instead, his Young Republicans group in Denton hosts a fajita night for all the local police officers. “We want to have a good conversation with our police officers on a range of issues so we start off that conversation with respect. That's what you need to create real change. If you start off by yelling, it's done already. We went and sat down with leadership of NAACP, on who we disagree on a number of issues, and we have a respectful conversation.”

Vaughn has his own personal vision of what legalization should look like. “I would want a tomato bill," he said. "First off, because parents should be in charge of their children and knowing what they're consuming. With laws like 21 to drink alcohol or 18 to smoke tobacco — as stupid as cigarettes are, that's not the government's job. That's a parental issue. Or to see the laws written county by county. The local community gets to decide how to structure that. Here, we still have dry counties and looking at the alcohol boards, you can see that it's easy to manipulate for favoritism. The biggest thing I'm against is a big new government agency making these kinds of decisions. I'm generally against all government control. Let's not expand that. But again, I'll take what I can get that gets me to the point that people aren't getting locked up.”

The recent polls see an upward tracking similar to that seen in attitudes toward homosexuality, and according to Vaughn, overall it's hard to find people who don't support some form of decriminalization because they do not think people should go to jail for marijuana. The general mindset is that the current laws are not working and in his activism, Vaughn has found the most effective tactic to be the emphasis on safer communities.

“We are literally funding cartels, gangs and the police state," he says. "We're funding crime by making marijuana illegal. We're asking people to go into the dark and we're making smoking a plant very dangerous. We have a lot of grandparents and this point really resonates with them. There are free market issues, medical freedom and other constitutional sensibilities but mainly, it's coming down to keeping your kid safe and the fact that prohibition makes the world a lot more dangerous.”

So Vaughn reveals the generational divide looming in the Republican Party over the social issues of individual liberty while the two wings of the GOP struggle over tactics moving forward. Wasting government resources on prosecution on the medical or recreational use of a widely grown plant stinks of everything that conservatism stands firmly against: the protection of individual freedom, the overreach of federal agency and the power of laissez faire capitalism. As the younger generation of Republicans come to their senses after the decades of blind stupidity in the war on weed, activists like Jason Vaughn lead the struggle toward a bright new day.

Lex Pelger is a writer, scientist and Shulginist. Read his work at lexpelger.com.