With its examination of race and gender in America, FX’s new series feels like it could have happened yesterday 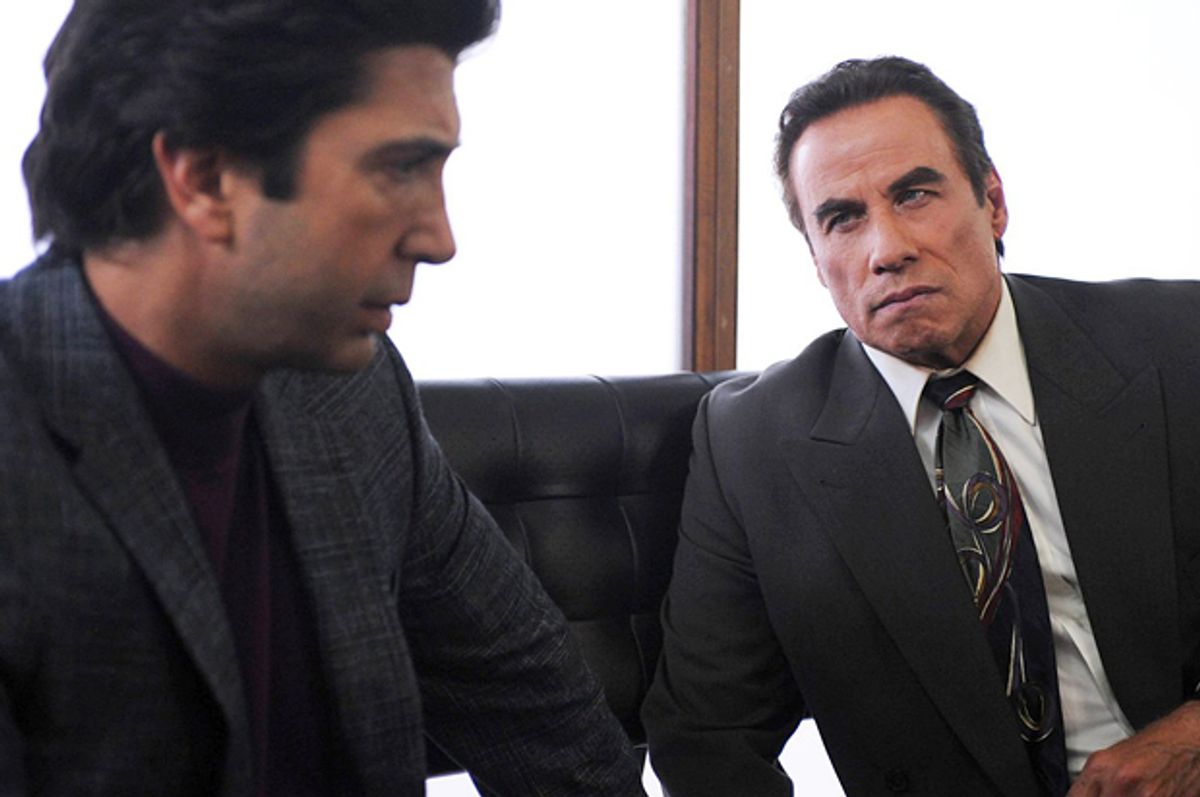 The names are all familiar. In the spate of true-crime storytelling that has gripped television over the past few months, “The People v. O.J. Simpson: American Crime Story” has the trump card—a story that no one could avoid, in the first half of the ‘90s, even if one wanted to; a televised trial that convulsed a nation. The O.J. Simpson case is a landmark moment in recent history, and one that it might be convenient to forget. Because if there is just one thing that “The People v. O.J. Simpson” is, it’s maddening. Fascinating and involved and nuanced and sympathetic, too. But its brilliance to my mind is how it carefully stokes the fires of righteous indignation, so that by the sixth episode—which will air mid-March—the fact that this all actually happened this way is an inescapable, haunting fact, looming over the viewer like a vulture.

Unlike “Serial,” or “The Jinx,” or “Making A Murderer,” you cannot argue that you didn’t know about the O.J. Simpson trial; even if you were just in grade school at the time, you knew. It was in the reams of tabloid gossip and the soundbytes played over and over on the news; the bestselling tell-all books and the daytime talk-show segments. The trial was entertainment, gossip, a talking point. It launched the profile of Robert Kardashian and his soon-to-be ultra-famous daughters; it cemented Johnnie Cochran’s stature in his crusade against the Los Angeles Police Department. But the one thing the trial was never about was the truth—about what really happened to Nicole Brown Simpson and Ronald Goldman on the night of June 12, 1994.

To its infinite credit, FX’s “The People v. O.J. Simpson” explains why the truth was so irrelevant, over and over again. The answer is not singular, nor is it simple; it brings in the echoes of the Rodney King riots that rocked Los Angeles just a few years prior and the particular demands of 24-hour television. It demonstrates how outmatched the prosecution was—both in terms of financial resources and because they were saddled with the routine misconduct and casual racism of the LAPD. The show depicts Simpson himself (portrayed by Cuba Gooding, Jr.) reading aloud a newspaper article which calls his trial the nexus of “racial politics, due process, and celebrity culture.”

In a telling scene before the trial starts, Vanity Fair writer Dominick Dunne (Robert Morse) and Judge Lance Ito (Kenneth Choi) discuss how Dunne might be able to be a comfort to the bereaved parents of the victims, given that Dunne’s own daughter was murdered in 1982—a conversation tinged by compassion and respect. Then Ito shows Dunne correspondence he received just that morning. It’s an autographed glossy 8x10 of Arsenio Hall, wishing the judge good luck on the eve of one of the biggest trials in history. Ito’s beaming, thrilled that Arsenio Hall has even noticed him. Dunne’s face, as delivered by Morse, is priceless. Not even the judge was immune to celebrity; the trajectory of the trial is clear in that room even before opening arguments were heard.

And to return to the topic of simmering anger—that finality is present from the first moments we meet defense attorney Johnnie Cochran (Courtney B. Vance) and prosecutor Marcia Clark (Sarah Paulson)—two very different and very sympathetic attorneys locked in battle with each other, played by two actors who are in the roles of their lives.

Vance is terrifying as Cochran, embodying both the lawyer’s sense of mission against the brutality of the LAPD and his ruthless dedication to winning. You’re forced again and again to appreciate his cunning—both when it feels righteous and when it feels despicable—as he clocks the case for the media circus it is and then neatly plays it exactly where he wants to go.

And Paulson, as Clark, is in the most heart-wrenching role of the series. Cochran has the opportunity to make the O.J. Simpson trial about race; Clark misses (or chooses to forego) the opportunity to make the trial about gender. A chain-smoking single mom who ends up being the only major female player in the trial, Clark is shaken by the details of the case, especially when it emerges that Nicole Brown Simpson had called 911 on her then-husband for battery as part of a pattern of abuse. The televised trial becomes as much about how Marcia Clark comes across on-camera as it does about Simpson’s defense, as her hair, her fashion, and her personal life are ripped apart by the rapt observers.

If Vance’s Cochran is gripping for his total domination of the trial, Paulson’s Clark is gripping as a case study in an ironclad case spinning out of control. As the key figures for either side of the trial, Clark and Cochran are most easily demonized—so the show almost demands compassion for the complexity and personal mission of both.

“The People v. O.J. Simpson” is based on the comprehensive and bestselling Jeffrey Toobin book “The Run Of His Life,” and comes from showrunners Scott Alexander and Larry Karaszewski, the screenwriting team behind “Ed Wood,” “The Man On The Moon,” and “The People v. Larry Flynt.” (Ryan Murphy is all over the advertisements for the show, but though he is an executive producer, this is not a splashy, over-the-top Murphy joint.) The series is part of the new “American Crime Story” anthology from FX, which will do a new trial every season, à la “American Horror Story” and ABC’s “American Crime.” And, either brilliantly or terribly, depending on your point of view, the Kardashians are in it—Robert Kardashian was O.J. Simpson’s best friend and defense attorney, and he is played by a quietly brilliant David Schwimmer in the adaptation. Kim, Kourtney, and Khloe are just tweens excited to see their dad on the news; Rob, Jr. is a little boy. Kris Jenner neé Kardashian is played with tearful rigor by guest star Selma Blair.

The New Yorker’s Emily Nussbaum called “The People v. O.J. Simpson” a “luscious Proustian cronut,” noting its indulgence, its lurid trashiness, and its nuanced exploration of memory in one fell rhetorical swoop. But there’s a case for “The People v. O.J. Simpson” that is not about memory, too. Many of the viewers of this series will not remember much about the trial except details like the bloody glove and the years-later “If I Did It”; there are plenty of smart young 20-somethings who weren’t even born when the verdict was handed down. And yet watching the events of the early ‘90s, it is impossible to not think of the current conversation being held about the way black men are treated by the justice system—now that many more brutalities than just Rodney King’s are routinely caught on tape. It’s also difficult to not think of the differences between the way the only female professional in her field is discussed compared to everyone else when watching Hillary Clinton attempt, once again, to secure the Democratic nomination to the White House.

And more than both of these, “The People v. O.J. Simpson” examines what it means to discuss these very real issues in the media; when we are both blinded by our own biases and attempting to act with the best of intentions. Cochran is both a hero of bringing matters of race front-and-center and an opportunist villain all too willing to use the illusion of racism to push his own agenda; Clark is both a beleaguered "feminist heroine" and unaware of her own racial privilege, which is most apparent in her hot-and-cold professional and personal relationship with fellow prosecutor Chris Darden (Sterling K. Brown). In an attempt to frame the trial, media turned people into symbols, and events into narratives—exposing, by the end, just how poorly equipped we are, as a nation, to talk about racial profiling, domestic abuse, and the irrational hopes and fears we have of our own celebrity heroes and next-door neighbors. Above all what’s staggering and endlessly compelling about “The People v. O.J. Simpson” is that it does not attempt to adjudicate or absolve guilt, but rather wants to understand; the result is a series that tells another chapter of how what we call America came to be.

And it’s profoundly sad, ultimately, because it’s a mess. Neither long-running injustice that came to bear during the trial—domestic abuse and police brutality—is really examined over the course of the arguments. Instead it’s a tale of the extremely exploitative loopholes of the criminal justice system and the not-so-complex instrument that is mass media. Somehow the real problem of black men being mistreated by the police was pit against the real problem of inescapable domestic abuse, and what won was celebrity.