A backstage pass to Trump-apalooza: Inside the bizarre, dizzying, xenophobic spectacle

Ann Coulter was there. So was Scott Brown. Here's what it's like to attend a Donald Trump campaign rally 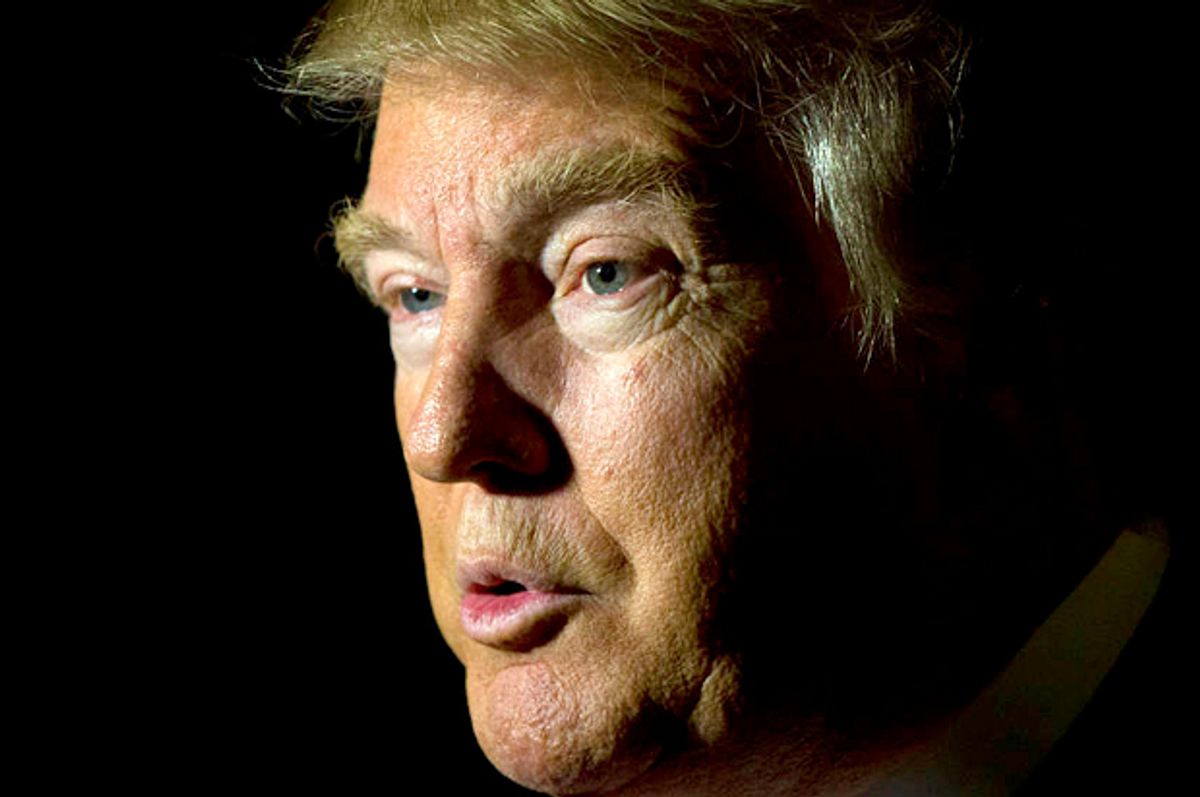 I’m sitting on the hard floor of an indoor tennis court with my laptop balanced on my knees when Ann Coulter sweeps past me, all fur coat and sharp angles.

This is in the press pen set up for Donald Trump’s first post-Iowa rally, at the Hampshire Hills Country Club in Milford, NH. It encloses a stage to accommodate TV cameras and a handful of tables and folding chairs for the working press. There are not nearly enough chairs, which is why I’m sitting on the floor.

Coulter has a seat, of course. She’s at a table in the corner, doing a radio interview with Howie Carr, the Boston-based conservative talk radio host. I wander over to join the crowd that immediately formed around her, but with the noise in this huge space I can’t hear a thing she’s saying. Not to worry. An hour later she’s on stage warming up the crowd for Trump.

My notes from Coulter’s speech look too banal sitting on a page in my notebook to really reflect what an ugly 10 minutes it was to endure. Imagine an unrelenting tirade of xenophobic nonsense, withering scorn for politicians in Washington who are letting the country be overrun with hordes of immigrants, and gay jokes at the expense of candidates still in the race (“Marco Rubio has nice high-heel boots”) and those long gone (“I’m more excited than Lindsay Graham in a fabric store!”).

To hear Coulter and former Massachusetts Senator Scott Brown (who was there to endorse Trump) and some of the local political figures who also spoke, you’d have thought Pancho Villa himself was leading an army of Mexican maple syrup tappers up Route 13 at that very moment to take over the cherished New Hampshire industry. In his own speech, Trump himself referred to the eroding of American industry, saying of companies having left this state in recent years: “New Hampshire got hammered…boy, what they’ve done to you is terrible.”

That right there is the foundation upon which Trump has built his entire campaign. Everyone in that room was a victim. (Except the press, of course – we’ve been told multiple times that we’re terrible people.) Terrorists are attacking, companies are leaving, jobs are disappearing, baristas won’t say “Merry Christmas.” And all that stands between you and oblivion is Donald Trump and the guns that he’s going to let you carry, because no one is touching the Second Amendment on his watch.

When Trump’s president, everyone will say Merry Christmas. This is one of the standards of his stump speech -- well, he doesn’t really give a speech; it’s more a gibbering stream of consciousness where sentences bounce off each other like bumper cars -- and it got some run at the Hampshire Hills Country Club. His greatest hits make up a Perry Como album from hell: “We’re Going to Have So Much Winning.” “If Anyone Attacks While I’m President, We’ll Knock The Hell Out of Them.” “Bowe Bergdahl Is a Dirty Rotten Traitor!”

The sad part is, there is a germ of truth underlying the whole spectacle. Jobs have disappeared, the middle class in America has been hollowed out, income inequality is at an all-time high. There is an anger, in this room and in the rooms where all the candidates both Democratic and Republican are conducting their campaigns, that no one seems to know how to channel. It has already turned the GOP primary into a bubbling cauldron that would terrify a coven of witches, and it’s possibly going to swamp the Democratic primary before the snow melts.

Yet we’re throwing out hucksters, charlatans and intellectual flyweights to lead us out of this mess. This was most evident when Brown took the stage. (To some scattered boos, it must be noted. Politically savvy New Hampshire crowds can smell flop sweat on politicians at 5,000 yards, and the carpet-bagging Brown seems about as popular as a swarm of pissed-off wasps.)

But Brown did somehow spend a couple of years in the Senate, which he thinks gives him some insight. He tried to convince the crowd that after his time in the nation’s capital, he had determined the best person to get things done in Washington is Donald Trump, and I mean, really, Scott Brown? Bashing politicians in Washington is one of the great American pastimes, but really? Of all the people you met in D.C., all the politicians you have rubbed elbows with, you think this Creamsicle in a suit is the solution?

There is really nothing else to say. When a campaign has stayed on top for months by appealing to the worst in people until they are so terrified they’ll turn the keys to the nation over to a jabbering baboon, all we can do is file our stories, pack up the laptops, and get out of this room. And hope there’s enough gas in the car to make the Canadian border without needing to stop for a fill-up.