"It was like watching home": "Fresh Off the Boat" makes history with funny and moving Chinese New Year episode 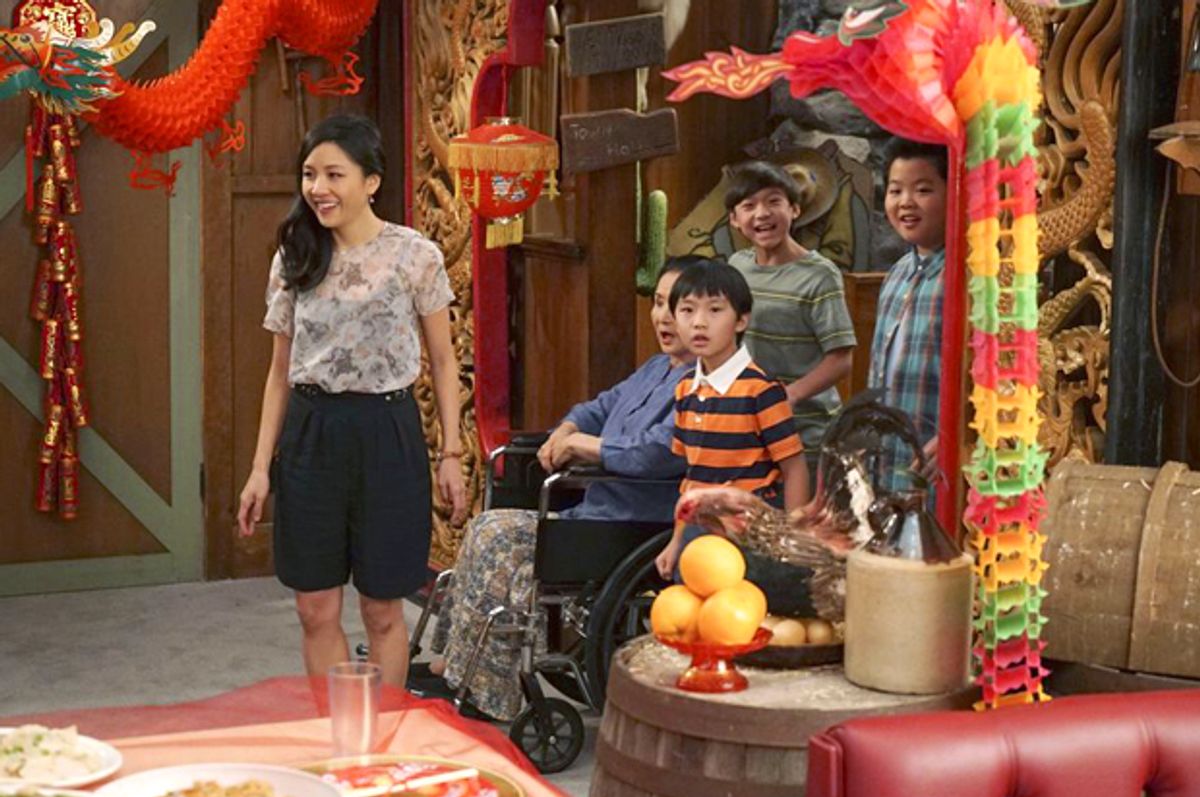 The Chinese New Year begins Monday, February 8, ushering in the Year of the rollicking, playful Monkey. But last night, the Year of the Rat arrived fresh off the boat…back in 1996. The second season of the hit ABC sitcom, “Fresh off the Boat,” found the Chinese-Floridian Huang family struggling to properly celebrate the Lunar New Year in Orlando. The kids are hoping for firecrackers, dragon dancing, and lots of red envelopes full of cash money. Instead, they end up at the headquarters of the “Asian American Association of Orlando,” the ‘90s Florida version of the Asian Republican Coalition.

To the Huangs’ great confusion, the “Triple A, double O!” is run by an extremely white guy named Rick, who claims to be Asian because he was born on a layover in Thailand. Rick greets the Huangs with a cheerful “Ni Hao!,” bows to them at the waist, then proceeds to whitesplain the meaning of the bow to them. The entire Huang family stares at him as if he’s grown a new head. When the “dancing dragon” turns out to be a male stripper in a plushy gator mascot suit hopping to a synth-pop soundtrack, the Huangs lose all hope of anything remotely resembling a “Chinese” celebration at the AAAOO.

Because this is the first time that the Chinese New Year has been introduced as a major holiday on American television, it’s not only been getting a lot of press but generating all the feels. “I immigrated with my family from Taiwan when I was six years old, and this episode was something I never would have fathomed seeing as a kid,” writes Cindy Pon in an email to me. The author of young-adult fantasies such as “Serpentine” and “Silver Phoenix,” Pon stresses that “Chinese celebrations are always about food and family. And yes, the red envelopes! I remember keeping my stash in a pretty moon cake tin.”

Cantonese author Ki-Wing Merlin, whose middle-grade novel debuts next year, also recalls “loving the red envelopes” during her childhood. Now part of a mixed family with children of her own, she celebrates the Chinese New Year by preserving the traditions as best she can. She recalls going to celebrations in New York’s Chinatown—it “was a big deal,” she says, and the day of the parade “they’d skip school” to be part of the crowd. Her grandmother used to spend weeks preparing a special feast. Today, Merlin buys the traditional sweet rice cake from local Asian markets, and either cooks herself or the whole family goes out for dim sum. “Each year I choose between the feeling of guilt or fraud,” she sighs. “Guilt usually wins.”

There are many different experiences of being Chinese in America; the Huangs of Florida are just one family out of many thousands. Among other things, what’s crucial about this holiday is that it’s capable of briefly unifying Chinese-Americans into a single social entity made up of Taiwanese and Cantonese Chinese, for starters, while lightly reminding us that Asia is not America precisely because the Chinese New Year starts in February.

In the “Culture of Time and Space,” historian Stephen Kern noted that the one thing every child quickly learns is that “there is only one time.” Except, by the end of the 19th century, this belief stopped being valid, when global consciousness started to grasp that it was possible for a single event to take place in two months, or even two years, such as twins born a minute before, and a minute after, midnight on New Year’s Eve. Even as railroads and armies pushed to establish standard time around the globe, Kern states, telegraph companies in China were aligned with Shanghai, foreigners in Chinese coastal ports used local time taken from solar readings, and everyone else in the country used sundials. That was in 1899, on the cusp of the 20th century.

Standard time is now taken for granted, but it ought to be understood as one of the great inventions of the Modern period. Chronologically speaking, the year 2016 started more or less at the same time for everyone on the planet. Culturally speaking, however, the New Year/Chinese New Year preserves topographic markers of difference cherished precisely because a homogenizing armature called "standard time" imposes its regulatory structure beneath the sparkly theater of the everyday. Thus the enduring importance of the parade, the most public component of the celebration, which enmeshes all participants in a vernacular web of social practices that we understand to be part of a delicate, increasingly vulnerable cultural continuum.

Correspondingly, the episode “Year of the Rat” begins and ends with memories of the parade. Louis Huang (Randall Park) introduces the story by telling the staff at his steakhouse restaurant: "If you can breathe properly the next day, you weren’t there.” “For me,” says second-generation San Franciscan poet Jennifer Liu, “it wasn’t the firecrackers that would stop my breath, but the drumming that came with the lion dancers. The drums would always drown out my own heart and I would feel my chest thumping the rhythm of their performance. It was never too loud, the crowd seemed louder, but like heavy bass at an intimate concert venue, the drumming would catch me in a chokehold and send me thinking into another place where the dancers transformed a costume into a fantastical creature that stole the spotlight of the streets. It was hard to peel my eyes away even for the stilt walkers because the drums were so demanding.”

And so, Liu says, when the drums began to beat in the last scene of the “Fresh off the Boat” Chinese New Year episode, “I was surprised to realize relief washing over me. As the camera panned and showed us the festive red decor, and then the dancing lion, it was like watching home, the reality of my youth and community.”

Yet that “reality” is made possible by the white employees at Louis Huang’s steakhouse, who work together to give their boss’s family a “Chinese” celebration. Mitch and Nancy get a lion costume from Epcot and practice all day to learn the lion dance, Carol sneaks in (illegal) fireworks, and Hector makes dumplings. In the feel-good assimilationist finale, it’s all one happy family sharing a Chinese meal together, complete with eye-rolls from Jessica Huang (Constance Wu) and a plug for Panda Express. Can’t get more American than that.