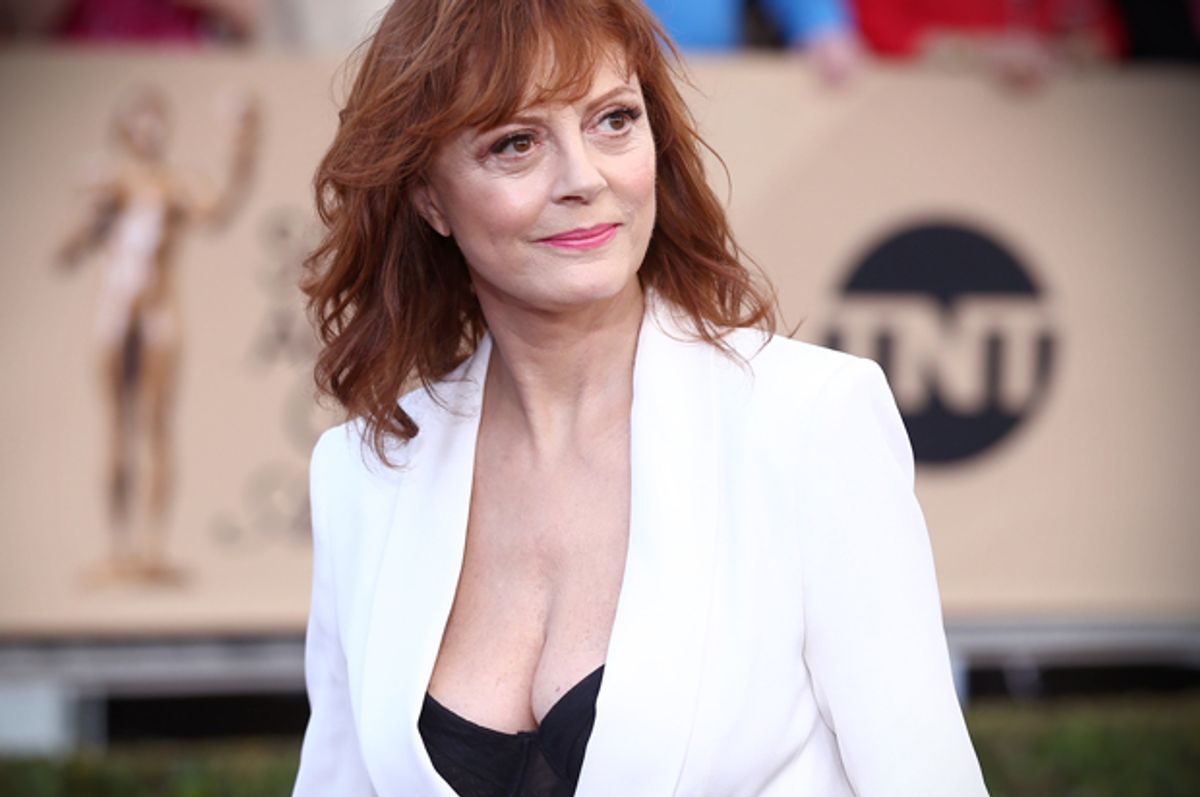 At Saturday night’s SAG Awards, Susan Sarandon created a stir. Or rather, her white Max Mara suit with a black bra underneath showcasing her cleavage as the 69-year-old actress presented the In Memoriam tribute honoring the likes of David Bowie, Leonard Nimoy and Alan Rickman, created a stir, one that shows just how uncomfortable older women who are proud of their bodies make us.

Today, he’s reiterated and clarified his position—in a nutshell, Sarandon’s breasts were not acceptable for the job she was doing:

Morgan even went so far as to say that “that's exactly what Ms Sarandon wanted” when a Twitter user argued that he was sexualizing women’s bodies.

In other words, Sarandon can either show off her cleavage and have anything else she has to say be ignored, or cover up and be taken seriously. This is the same kind of thinking that gets teenage girls sent home from school because their top doesn’t cover their crotch. A female body equals sex equals nothing else she does matters.

The idea that Sarandon isn’t capable of deciding for herself how much of her body to bare is both sexist and ageist, as Harriet Hall at Stylist pointed out, writing, “Sarandon is 69 and therefore it's apparently not OK for her to remind us all that she’s still a living, breathing, sexual being. Not only are women confined to the rules of acceptable female behaviour, but the rules of acceptable behaviour alter depending on their age.”

He’s not the only one. At the site LifeZette, Alexa Lardieri wrote, “Sarandon isn’t the only, too-old-to-wear-that celeb who has bared it all on the red carpet or gone over the top in inappropriate situations. Other actresses have tried holding onto their youth by wearing outfits that no one wants to see them in.”

Here’s the thing: it’s not your job to tell Sarandon that she’s “too old” to dress herself; if anything, the older a woman gets, the more freedom she should have to dress however the hell she wants. I interpreted Sarandon’s look to be all about saying to the world, “Look at me. I’m happy with my body, and I could care less if you’re not.”

As for the assertion that “no one” wanted to see Sarandon in that outfit, Twitter users begged to differ.

I asked Joan Price, author of “The Ultimate Guide to Sex After 50” and other books about senior sex, for her take. “Susan Sarandon is gorgeous and so is her cleavage. There's no expiration date on sexy bodies and the juiciness that comes with confidence,” said Price. “I’m applauding Sarandon not only for showing off her sexy body (that’s what film stars do, for goodness sake), but also for acknowledging that her breasts are beautiful even though they don’t stand up at attention in a perky, 20-year-old manner—although many of us didn’t have perky breasts at 20, either. That Piers Morgan calls her ‘tacky’ says everything about him and nothing about her.”

Dr. Laurie Betito, a clinical psychiatrist with a specialty in sex therapy and author of “The Sex Bible for People Over 50,” also praised Sarandon when I asked her opinion. “It’s very sad that our society thinks there is an expiration date for sexuality and sexiness,” said Betito. “There is no shame in being proud and sexy at any age. Aging and sex is the new taboo. People need to wake up and realize that their parents and grandparents are still doing it and enjoying it.”

It’s worth noting that while Sarandon did tweet one photo of her getting ready for the SAG awards and two from the event itself, the rest of her recent Twitter feed, unlike Morgan’s, has ignored cleavage in favor of praising Bernie Sanders. I’m glad to see that while utterly out-of-touch people like Morgan are getting worked up over whether or not Sarandon’s breasts were over-the-top, she’s got more important things to do.