Ted Cruz, human dog whistle: Evangelicals -- those "courageous conservatives" -- know exactly what he is talking about

Donald Trump is right: Everybody does hate Ted Cruz. Except for evangelicals. He knows just how to talk to them 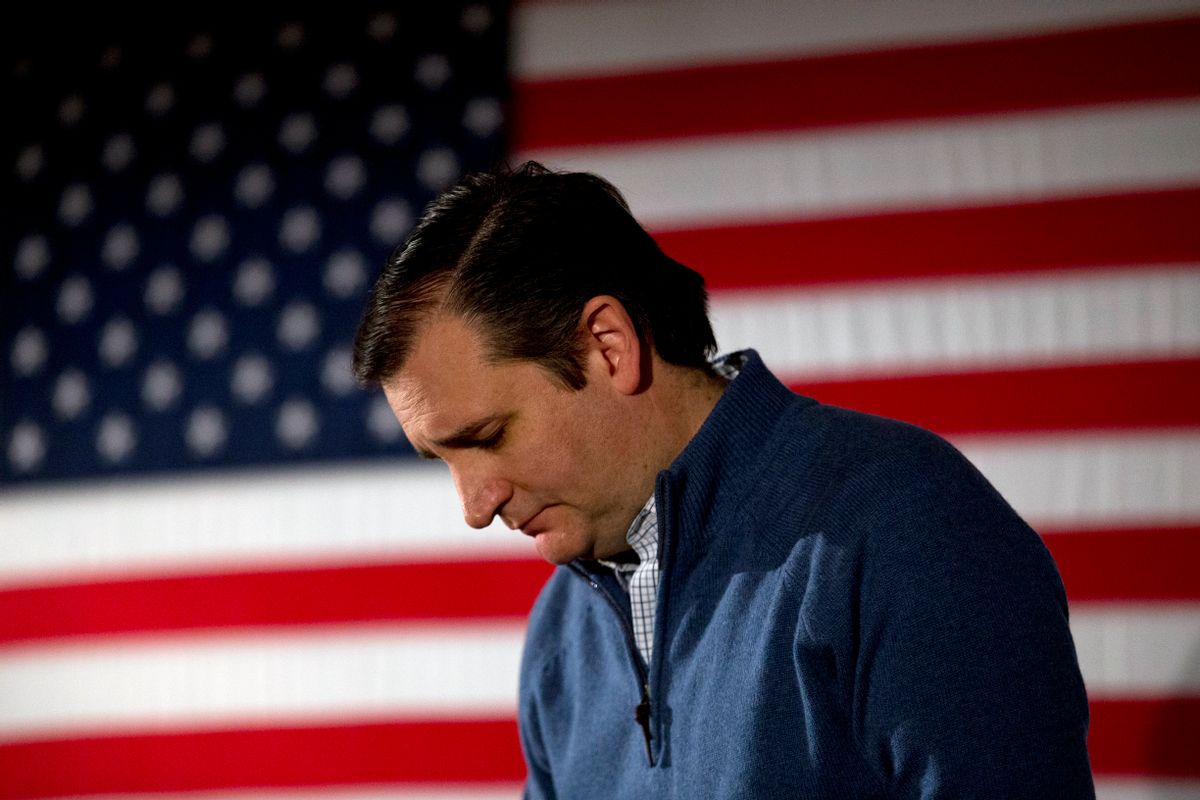 Republican presidential candidate, Sen. Ted Cruz, R-Texas, looks downward while listening to a question from the crowd at a campaign event (AP)
--

“God bless the great state of Iowa!” the junior senator from Texas shouted into a hand-held mic at a victory rally on Monday. Ted Cruz followed that with, “Let me, first of all, say, to God be the glory.” To any evangelical with ears to hear it was an allusion to Fanny Crosby’s popular 19th century hymn of the same name. “Choose Cruz” signs fluttered with excitement in front of him. He responded with his trademark smirk that masquerades as a smile. His wife, Heidi, stood by his side, looking like a beaming wax figurine. “Courageous conservatives,” a code word for evangelical, had made it all possible, he shouted. Indeed, Cruz is poised to reap the rewards of the evangelical vote like few others. That’s no small matter. The movement claims approximately 25 percent of the country’s population.

True, Texas Sen. Ted Cruz has strong supporters. His handy Iowa victory over Trump, with 28 percent of the vote, proves as much. But he has many more critics. Pundits, politicians and comedians have heaped on descriptors like “arrogant,” “smug,” “smarmy” and “creepy.” At the head of the pack of haters stands Donald Trump. When not questioning Cruz’s national origins and eligibility to run, Trump likes to repeat the mantra “Everybody hates Ted.” But there is a kernel of truth in Trump’s damning words.

Trump is certainly not alone in his Cruz hating. Among fellow Republicans Sen. Cruz is about as popular as fire ants or bed bugs. The former senator and GOP candidate for the presidency Bob Dole calls him an “extremist.” “I question his allegiance to the party,” Dole complains. John McCain, another GOP senator and one-time Republican presidential nominee, called Cruz and his fellow Tea Partyers "wacko birds." The Republican governor of Iowa had hoped to see Cruz lose big in Iowa. (Cruz committed the cardinal sin of not bowing at the altar of ethanol.) Republican senator from Utah and president pro tempore of the Senate, Orrin Hatch, says bluntly, “I think we'll lose if he's our nominee.”

Cruz rose to national fame/infamy for his quixotic effort to defund Obamacare in 2013. His ham-handed efforts to shut down the government also won him the distinction as one of the most hated politicians in the Beltway. It’s not hard to imagine him burning down a house to make a dogmatic point about fire safety. For Cruz, a disciple of the far right, the blessed words of St. Reagan still ring as true today as they did in 1981, “Government is not the solution to our problem, government is the problem."

Evangelicals revered Ronald Reagan as well. And now many of them are finding Cruz irresistible too. These conservative Christians see much to admire in the doctrinaire scourge of Obama. The antiabortion believers cheer on his campaign’s crusade to “defund Planned Parenthood to ensure its morally bankrupt business receives not one penny of taxpayer money.”

Why couldn’t Trump rally the faithful to his side? Trump’s strange evangelical minstrel routine was just not convincing. Sure, the real estate tycoon did a short video in which he held up a Bible that his mother gave him. He has extolled the values of “eeevanjelicals,” as he calls them, and even made the pilgrimage to Liberty University. It was not enough to convince. And then there was the bizarre gaffe when Trump put money onto a communion plate at First Christian Church, in Council Bluffs, Iowa. When Cruz, on the other hand, quotes or paraphrases Bible passages, speaks in Manichaean terms about good and evil, or leads in prayer, it strikes the faithful as credible and true.

One of those convinced by him is a reality show star and darling of the far right. The hirsute and camouflaged patriarch of "Duck Dynasty" Phil Robertson says Cruz is the one. Robertson calls on his fellow conservative Christians to join Team Cruz. Robertson put it simply in a TV spot: “My qualifications for president of the United States are rather narrow. Is he or she godly? Does he or she love us? Can he or she do the job? And finally, would they kill a duck and put ‘em in a pot and make a good duck gumbo?” Apparently, Ted Cruz meets all the criteria. At a recent Cruz campaign event in Iowa City, the "Duck Dynasty" star said his candidate would restore values to America and then he called gay marriage “wicked” and “evil.”

The million-selling Christian psychologist James Dobson is another one of Cruz’s staunch supporters and an equally fierce opponent of the “gay agenda.” Dobson views America as a modern-day Sodom on the eve of its fiery destruction. But perhaps Cruz, a 21st century prophet, could turn things around. “Ted Cruz's record on religious liberty, life and marriage is second to none in this Republican field,” Dobson recently remarked. Millions of other evangelicals likely think the same. The Pew Research Center reported in late January that half of white “evangelical voters think Carson, Trump and Cruz would be good presidents.” Whereas 50 percent said that Hillary Clinton would be a “terrible president.”

Cruz courts the evangelical vote so well because he knows what they want in a candidate. Many of them feel that their country is on the path of destruction. They are dismayed by lapses in traditional morality. Pew reported in November 2015 that evangelicals are “more likely to take both fiscally and socially conservative positions, such as support for smaller government and opposition to same-sex marriage. They also tend to believe abortion should be illegal in most or all cases and are skeptical about human evolution through natural selection.” The moral torpor they see all around them needs a firm response. “Compromise,” for Ted Cruz and his evangelical acolytes, is a dirty word. It means something like “sellout” or “turncoat.” He has no truck with what he sees as the pieties of the effete left. Global warming is a hoax, he tells reporters, to the glee of conservative skeptics. Gun control is never the solution to gun violence. Government spending is out of control and America’s borders are being overrun.

At the February 2015 meeting of CPAC, Cruz energized the faithful much as he has done in Iowa. To shouts and whoops he rumbled “America is in jeopardy and we are met today on a great battlefield.” There would be a fight between good and evil, individual responsibility and government overreach. His tone was that of a preacher. It was the same old song, shouting down liberal judges and denouncing a promiscuous society. An oldie, maybe, but it was a song evangelicals loved to sing along to.

Still, ironies abound. Even though Cruz attended Harvard and Princeton, he is a kind of grand marshal of the evangelical resentment parade. He rallies the faithful by promising to fight against Obamacare, to stick it to the elite establishment, and stand up against the forces of evil. That was a message that carried the day in Iowa. Depending on the strength of evangelical voter turnout it is a message that will likely resonate in many other caucuses and primaries.