This is how the U.S.-led coalition investigates itself when accused of killing civilians

"Accidents" are acknowledged and lamented, but their scale remains unclear -- just the way the Pentagon wants it 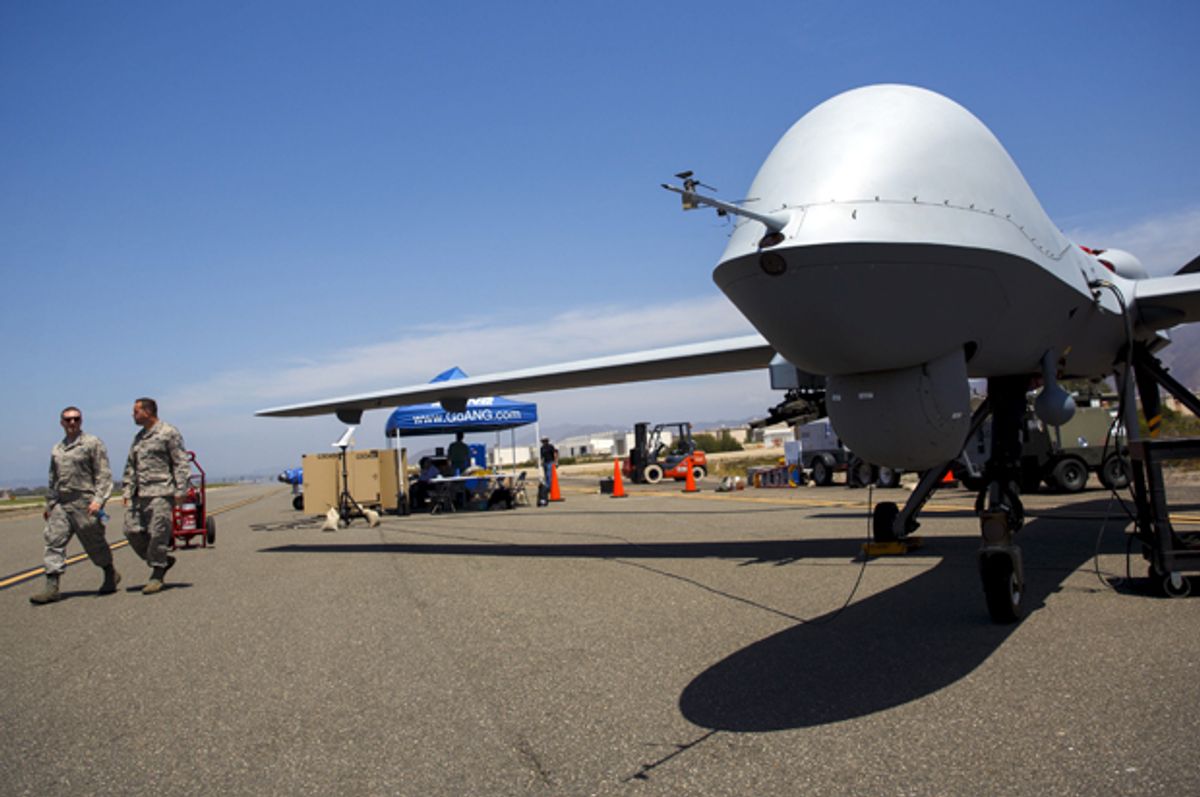 BEIRUT, Lebanon — Civilians are being killed by US airstrikes in Syria and Iraq. That is not in question: the Pentagon has admitted to it and expressed regret. The scale of the killings, however, is in question.

To date, the US-led coalition fighting the Islamic State has acknowledged killing just 22 civilians during Operation Inherent Resolve, as the campaign is known. Independent monitoring groups put the toll much higher. Airwars, an organization that tracks reports of civilian casualties, says coalition airstrikes have probably killed between 862 and 1,116 civilians during the campaign so far.

One of the reasons for this discrepancy is the manner in which the US coalition investigates reports of civilian deaths. GlobalPost’s own reporting reveals some uncomfortable truths about just how cursory some of these investigations can be. In two examples detailed below, basic information provided by GlobalPost led the coalition to revisit allegations it had previously denied.

The coalition has a team of “several” individuals dedicated to investigating possible civilian casualties caused by its airstrikes, a Pentagon spokesman told GlobalPost. That small team is responsible for investigating the unintended consequences to civilians of the more than 35,000 bombs and missiles that have been deployed during the campaign over the last 16 months.

The initial reports of a fatality can come from anywhere: contacts on the ground in Syria and Iraq, open source material, or information from other US government departments.

In order for the coalition to launch a full investigation — which is typically exhaustive — the team must first determine if the reports have enough “credibility” to warrant it. Most reports never make it past that so-called “credibility check.” To date, the coalition has only declassified full investigations into two incidents of civilian deaths: One series of bombings in Harim, Syria on Nov. 5 and 6 of last year that “likely resulted in the deaths of two civilian children,” and another on March 13, 2015 near al Hatra, Iraq that “likely resulted in the deaths of four civilians.” (The coalition has admitted killing civilians in five other incidents, but the reports have not yet been made public).

The two declassified investigations — 76 and 59 pages long respectively — are signed off by a major general of the US Army and a lieutenant general of the US Air Force. They include the testimony of the pilots and ground crew involved in the strikes, and take into account outside sources and open source information.

The problem lies in getting to the stage where reports of civilian casualties are investigated properly. The vast majority of allegations are deemed not credible by the coalition very early on because of the way in which airstrikes are logged and subsequently checked. The locations of many strikes are often tied to the nearest large town or city; if a report comes of a civilian casualty in a village and the name of that village doesn’t appear in the coalition’s records, it is often deemed not credible. The coalition appears to make little effort to discover the location of a village if it does not appear in its records.

The first example comes from the small village of al Gharra, at the foot of Mount Abdul-Aziz, about 25 miles west of Hasaka city in northeastern Syria. Ismail al-Hassan, 55, was killed in what his son said was a coalition airstrike on the village on May 6. You can read about the report in detail here.

A coalition report on airstrikes in the area for May 6 and 7 reads, “Near Al Hasakah, four airstrikes struck one large and two small ISIL tactical units, destroying 12 ISIL fighting positions, an ISIL trench system and an ISIL vehicle.”

Suspecting that one of those strikes might have been the one that killed al Hassan, GlobalPost contacted the coalition by email to ask for the location of the attacks. A coalition spokesman said he could not provide any more information than was publicly available.

GlobalPost asked whether the coalition targeted either al Gharra or al Gharba — another spelling used for the village name — or anywhere on Mount Abdul-Aziz (or Mount Kezwan, as it is called in Kurdish). The spokesman said they could find no record of striking near the town of Al Gharra/al Gharba, or Mount Abdul-Aziz/Mount Kezwan.

Over the course of several emails, the coalition denied — or said it did not have records of — conducting airstrikes on Mount Abdul-Aziz.

It was only when GlobalPost provided testimony from the son of a civilian victim, comments from a Kurdish commander crediting US airstrikes as instrumental in their capture of the mountain, and video of the offensiveshowing what appeared to be smoke from an airstrike, that the coalition agreed to review the incident.

Attempts to discover whether the coalition was responsible for the second airstrike investigated by GlobalPost played out in a similar way. As with al Gharra, this incident occurred in a small village near al Hasaka. According to the witness interviewed by GlobalPost, coalition airstrikes struck the village in the early hours of Dec. 7, killing dozens of civilians.

The coalition said it had previously carried out a credibility assessment on the strike in al Khan after reports of civilian casualties emerged, among them a report by McClatchy.

The coalition’s report for that day said that a number of airstrikes were carried out “near al Hawl.” GlobalPost provided segments of testimony from a witness to the strike, and asked whether the village of al Khan had been targeted. The coalition responded: “We conducted a credibility assessment on the allegation of civilian casualties near al Khan Dec. 7, 2015. Since the coalition did not conduct airstrikes near al Khan on Dec. 7, 2015, there was no investigation conducted.”

On this occasion, the coalition disclosed the location of the airstrikes it carried out on Dec. 7 — showing them to be south of al Hawl. According to a local activist group that reported from the scene of the strike, the village of al Khan sits about 10 miles southwest of al Hawl — in the same area the coalition said strikes had occurred.

After GlobalPost provided this additional information, the coalition said it would “consider your updated information regarding this allegation, as with any allegation we receive, and we will review it with any information we have about the incident.”

The coalition’s response to the two incidents illustrates how without very specific information about the location of alleged civilian casualties, most claims don’t make it past the credibility check.

On both occasions the coalition initially denied hitting the villages, but appeared to be basing those conclusions on a cursory search in their records for the names of the small hamlets. Even Mount Abdul-Aziz — 50 miles from end to end, and which allies on the ground said was captured with the backing of US airstrikes — did not appear when the coalition searched its records.

There are other reasons the coalition will choose not to investigate an allegation. One of the most common is simply “lack of sufficient evidence” — a phrase that is used even when the opposite appears to be true.

A report logged on Oct. 17, 2014 cites the Syrian Observatory for Human Rights as the source. The group, which has a network of sources on the ground across Syria, reported the death of a number of civilians as the result of a coalition strike on an oil facility in Khasham, Syria. Local activists reportedly named four of the victims, saying they were fuel tank drivers. The incident was subject to a credibility assessment, but it did not make it to the investigation stage. The coalition notes in its assessment that a strike did take place on the facility on Oct. 16, but reported that aircrews "did not observe any personnel on their targeting pod prior to weapon release." It concluded that there was “insufficient evidence” to determine civilian casualties. So it was never fully investigated.

In other cases, reports of civilian deaths are deemed not credible without explanation. One report, the initial source of which was a freelance journalist who posted a picture of a partially destroyed house on Twitter, came on Jan. 22, 2015 in Ninevah province, Iraq. The coalition’s credibility assessment notes that a total of 32 targets were struck in the province on Jan. 21 and 22, six of which involved striking buildings. “Initial assessment is that only 2 strikes possible for this allegation (one was engaged by UAV, both has UAV coverage)” the coalition notes.

In response to GlobalPost's findings, a coalition spokesman said: "We take every civilian casualty allegation seriously and look into every one we receive."

They added: "It’s important to note that the current environment on the ground in Iraq and Syria makes investigating allegations extremely challenging. Traditional investigation methods, such as interviewing witnesses and examining the site, are not typically available. In some cases, no assessment is made until additional information can be obtained; however, such allegations continue to be tracked. Additionally, a closed allegation can be reopened at any time if additional information related to the strike becomes available."

Chris Woods, the founder of Airwars who has dealt more closely with the coalition than perhaps any other journalist, thinks the problem may be one of the military’s investigative ability, rather than an attempt to cover anything up.

“I think this is often more cockup than conspiracy. Quite often the UK or France will report airstrikes on a particular day at a particular location — while in its own reporting the coalition makes no mention at all of those cities or towns. But then what's often being summarized is perhaps dozens of munitions releases at multiple locations, compressed into a handful of more media-friendly reports of 'airstrikes.'”

The result is that Americans are led to believe that the air campaign in Syria and Iraq can be waged shedding very few innocent lives.