At a campaign rally in New Hampshire last night, the contradictions that sunk the Christie campaign were obvious 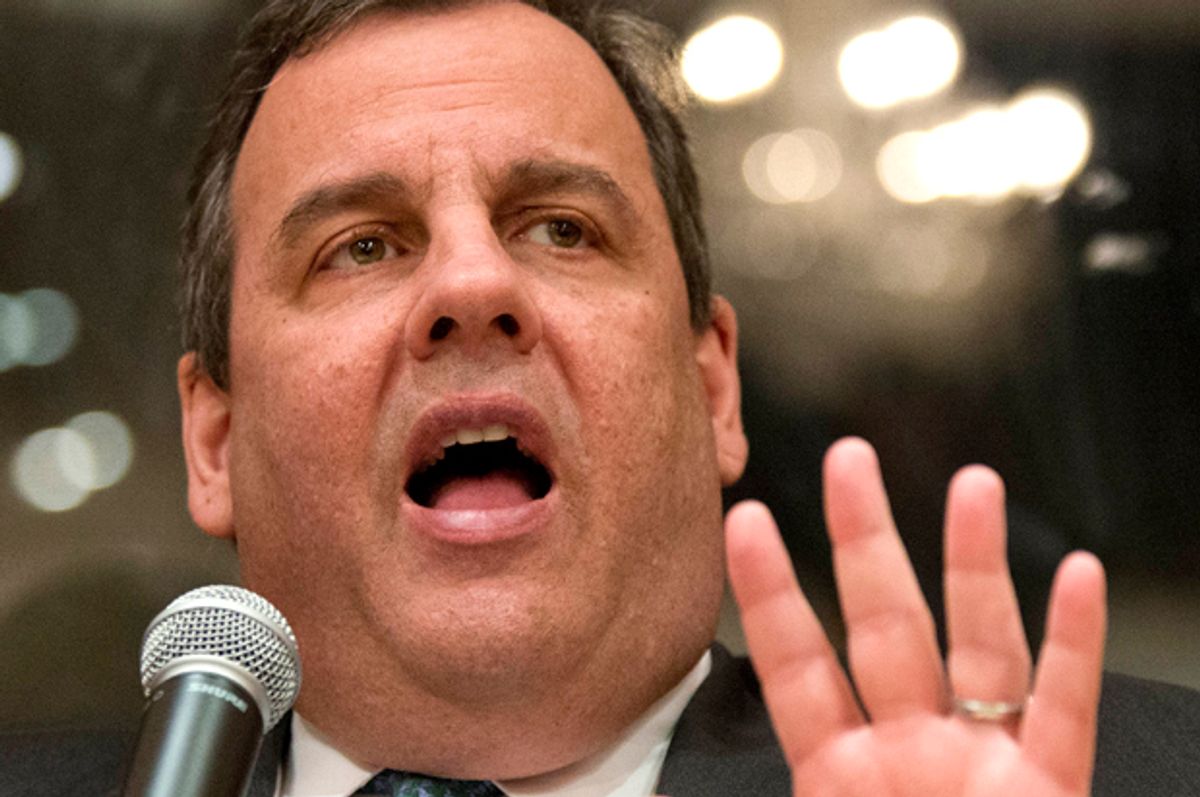 If on Wednesday you wanted to know what $2.1 billion looks like, you could drive up to the Chris Christie town hall at the White Rock Senior Living Community in Tiny Bow, NH. That’s where you would catch a glimpse of Christie buddy Meg Whitman, former CEO of eBay, current CEO of Hewlett Packard, and author of one of the most hilariously inept gubernatorial campaigns by a major-party candidate in recent memory.

Six years ago in 2010, Whitman spent $144 million of her own money – a record for self-funding in American history – to lose to retread Jerry Brown in the California governor’s race. This was in a year when it was very, very difficult for Republicans anywhere to lose an election.

(Ironically, it was the same year Christie opponent Carly Fiorina got trounced by Barbara Boxer in the race for a California senate seat. Now Whitman is running Fiorina’s old company while Fiorina runs a hilariously inept presidential campaign. It’s a small world of plutocrats who can self-fund their runs for political office in America.)

Whitman, who is the Christie campaign’s national finance co-chair, was tramping around New Hampshire in a cold and steady rain to introduce the New Jersey governor to primary voters. I guess in the world of the state’s primary retail politics, this could pass for a good thing. My own feeling is that it says something about the fractured state of the Republican Party in 2016 that the frontrunner, Donald Trump, couldn’t do better than a has-been like Scott Brown to endorse him the night before, while Chris Christie can’t do any better than a has-been like Meg Whitman. Sure it is still early, but doesn’t the GOP have any prominent figures who aren’t washed-up singers (Kid Rock) or nuttier than a Waldorf salad (Ann Coulter)?

Christie in person is the same Christie you see on television. He glowers. He snarls. He boasts about how tough he is. He opens with a teleprompter joke about Barack Obama, and spends the next few minutes reciting a litany of right-wing bullet points about the president: He was too inexperienced for the job, he fooled us all with good speeches (which he read off his TELEPROMPTERZZZZ!!) and a great smile. His inept governance has left the nation weakened and vulnerable.

Listening to him, you’d think Christie was giving this speech not in a cozy senior living facility in a quiet New Hampshire town, but standing on a steam grate in Lafayette Park as North Korean paratroopers were landing on the White House lawn across the street.

How soul-crushing must it be to give this speech three or four times a day? To spend your waking hours terrifying senior citizens that the civil order could collapse at any moment because of the feckless president? Or getting them angry that their Social Security or Medicare might get “stolen” by “lying” politicians, then soothe them with plans for means-testing and raising the retirement age for other people, so everything will be okay just so long as the people in this room continue to have the decency to not be 30 years younger?

Everyone in the GOP field is an asshole. Trump is an asshole, but he’s such a cartoon that it can be hard to tell what’s real and what’s shtick. Ted Cruz is an asshole, but it’s calculated assholery in service of his overarching goal to be president and his inbred belief in his true self as a superior being.

What stands out about Chris Christie is that he’s a basic, garden-variety asshole. He’s the guy who cuts the line at White Castle and then, when you say something, asks you what you’re going to do about it. He has all the humanity of a garden slug.

Take the War on Drugs. Earlier in the campaign, Christie spoke movingly about the heroin crisis in New Hampshire -- which has seen an enormous spike in addiction rates over the past few years -- and what the effect of it has been on communities. Yet on Wednesday he almost gets into a shouting match with an audience member over medicinal marijuana and legalized pot – Christie seems to favor maximum enforcement – and goes on to bark that Obama “let” Colorado and Washington legalize weed and won’t impose federal law. (Earlier, asked about federal environmental regulations, he gave an impassioned discourse on the right of each individual state to come up with energy plans tailored to their own needs and wants. So much for principled federalism.)

Needless to say, the issues of reforming mandatory minimum sentencing and mass incarceration go unremarked upon. Why would those problems be important when there are teenage stoners to throw in jail?

Or take foreign policy, where his answers on what to do about the Syrian civil war and the Russian presence in that country boil down to establishing a no-fly zone and then telling Russian President Vladimir Putin in a stern voice, “Don’t test me,” a comment that would probably have old KGB hand Putin laughing into his borscht

The sad part is that Christie put most of his eggs into the New Hampshire basket. He campaigned harder here than anyone for months, all but ceding Iowa to Cruz and Trump. And for a minute it looked like it might at least get him some momentum to carry on to Nevada and South Carolina. But since mid-December his poll numbers here have dropped by almost half. It’s hard to see how finishing sixth in an eight-person field on Tuesday justifies continuing this slog.

On the other hand, he has his own personal billionaire. One of those can take a guy a long way.