Not all comedians are tickled by Trump: He's "in the news and that’s our job, but personally, to me? It’s nothing but scary"

Salon talks the role of satire in primary season politics with Paul F. Tompkins, host of "No, You Shut Up!" 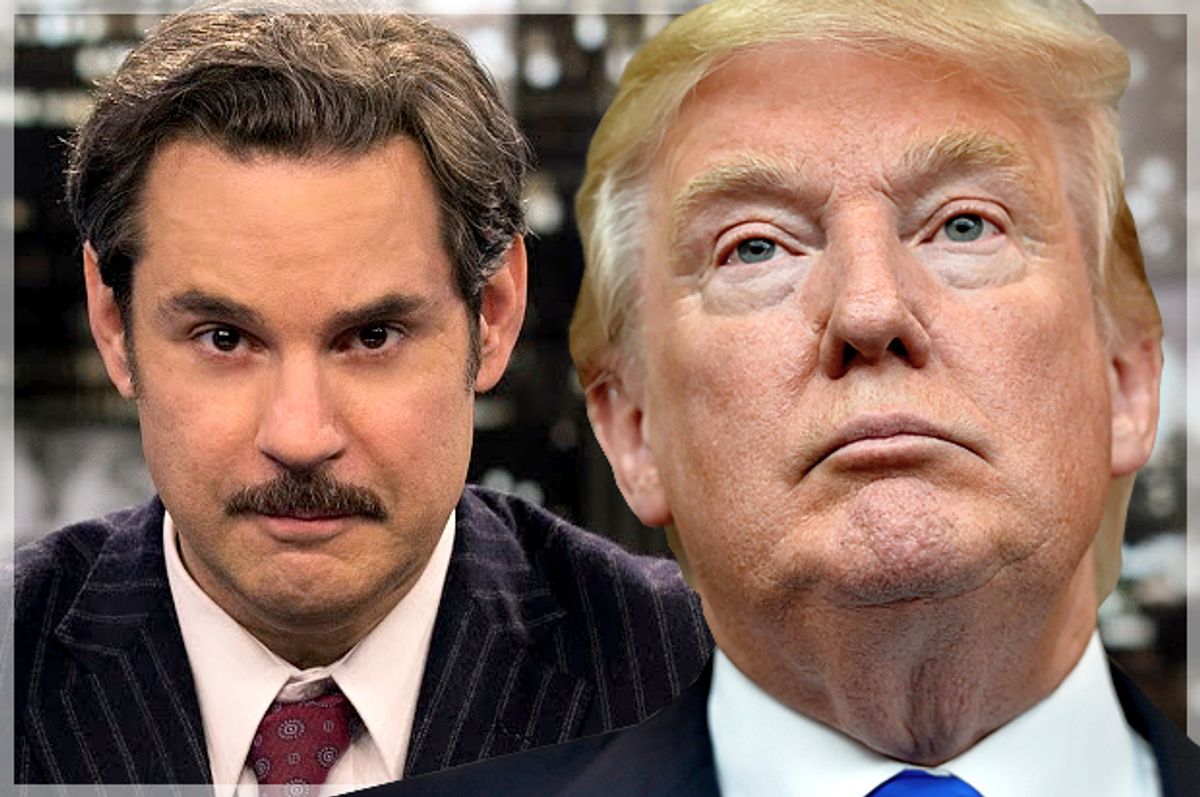 The seemingly endless 2016 primary election has already become a hallmark one for American comedians thanks to the most eccentric array of presidential candidates that many of them have ever seen. For Paul F. Tompkins, host of Fusion’s late night news show, “No, You Shut Up!,” the fodder almost isn’t worth the fright.

While the thought of a Donald Trump presidency brings back memories of eight long years of George W. Bush jokes, Tompkins and other comedians are genuinely concerned about the headline-grabbing real estate mogul actually becoming president. Meanwhile, there are people like Bernie Sanders, Ted Cruz, Hillary Clinton and Ben Carson to mock, but at a certain point—like around the Iowa caucus—the general election begins to come into focus and give conscientious comedians pause.

Tompkins shared his thoughts on Trump’s chances, Hillary vs. Bernie and the responsibility of a satirist during an election year at the 2016 Riot LA comedy festival on Saturday, where he performed a live version of his Fusion show to a sold-out crowd. “No, You Shut Up!” returns for its fourth TV season Thursday.

So, is this the most ridiculous primary election in history, or what?

And then the idea of Bernie Sanders, which I think it’s great that that’s happening, but the Bernie people who are saying well, if he doesn’t get it then I’m not voting. It’s like, I get why you don’t like Hillary, I get your points and they’re valid, but the one big takeaway from the George W. Bush presidency, is it does matter who you vote for—they're not all the same.

Now that we’re in this post-Jon Stewart era where late night comedians are routinely looked to for insights on serious issues, do you feel any weight on yourself as a comedian in that way?

I think that the idea of satire always is to break things down for people, and point out absurdities and injustices in a fun way. I think Jon Stewart did that in such a wonderful way, and the advent of the Internet and social media has made it easier to share that stuff around. People can get an understanding of something complicated in a very simple way that’s not so dry. But I think the job of the satirist is the same as it was from Mark Twain to Will Rogers to today. It’s always been the same.

Do you find that there are specific challenges to covering an election as opposed to any other type of comedy?

It’s the skewering of both sides and pointing out the obscurities on both sides, which is difficult to do because the right is so much more lampoon-able. They’re more ridiculous, and they sound ridiculous. On the left, it gets into a dryer area of ridicule, so it’s like, well, how do I make something like corporate ties funnier than the crazy shit that they’re saying about guns and religion and things which are so much more obvious? It’s hard to equate Sarah Palin with anyone on the left. The stuff that’s worth mocking gets into a much sadder area. [Laughs] You get bummed out about the system instead of going, oh, this is hilarious.

Jokes aside, when do you think is the time to freak out about Donald Trump?

Oh, the time is now. He seems impervious to any failure in the eyes of the people who support him. And I get why this is refreshing to some people because he is speaking very clearly about things that they care about, and is making it sound like he’s no bullshit: “I’m saying what you’re feeling.” Of course the scary thing is that the things he’s saying are very hateful, and there’s no nuance to it. It’s all pure Id.

But the idea that, “Oh man, comedians must be having a field day with Donald Trump.” It’s not funny to me, like we’re trying to make it as funny as possible, because it’s in the news and that’s our job, but personally, to me? It’s nothing but scary.

The thing that I’m banking on with Trump not being president is that I don’t think he wants to be president. I think he likes the life he leads, but doing this right now is very entertaining, it feeds his ego and I think he genuinely enjoys the idea of, “Yeah, I could be president if I wanted to.”

But then he has to actually do the job. And it’s not even a very well-paying job!

Yeah, exactly! Well, that’s something he’ll have to figure out. How can he still do the same things that he does and still be president. I think at the end of the day, he’s going to say, I don’t want to do this. Personally, I think the best way out for him is [if] the Republican party will not give him the actual nomination and he can walk away and say, “They blew it.” Because any time he’s had any failing in business, he’s always turned around and said, “I didn’t want to do that anyway.” When NBC took his show, he was like, “I don’t care. I’m glad. I fired NBC!” He’ll always twist it around. So I think it will be the same thing here. The Republican Party will be able to say thank God we don’t have him as our nominee, Trump can say he didn’t want to do it, and then he won’t run as an Independent. That is what I hope is going to happen.

And what do you think will happen between Hillary and Bernie?

I honestly don’t know! I mean, if you’re on Facebook, every day there’s a new poll or study or article saying here’s why Hillary can’t win, here’s why Bernie can’t win, so I really don’t know what’s going to happen. That part I genuinely am excited about and I think it’s great. I love that Bernie is doing what he’s doing and that Hillary’s in the race, but I’m not sure who would make a better nominee, or even a better president.

Why do you think there aren’t more comedians-turned-politicians?

Al Franken’s a good example of that, but also I think the world has changed. You remember Ronald Reagan—I’m old enough to remember the idea of him being president being absurd. But first he was president of the Screen Actor’s Guild, then ran for governor [of California], then ran for president. He made it happen. It’s tougher for comedians because they’re responsible for their own words. So even though Ronald Reagan was in a movie with a monkey, he didn’t write that movie. So now, with comedians, people could point to and say, look at all those things you said, and turn the opposite base against you. But you also have a chance to make a lot of really good points as a comedian, and I think that could actually be a strength. Really, the biggest hurdle for a comedian being a politician or holding office is the sleep schedule.