Rubio's foul response to Obama's mosque speech: Straining to find "division" in a call for unity 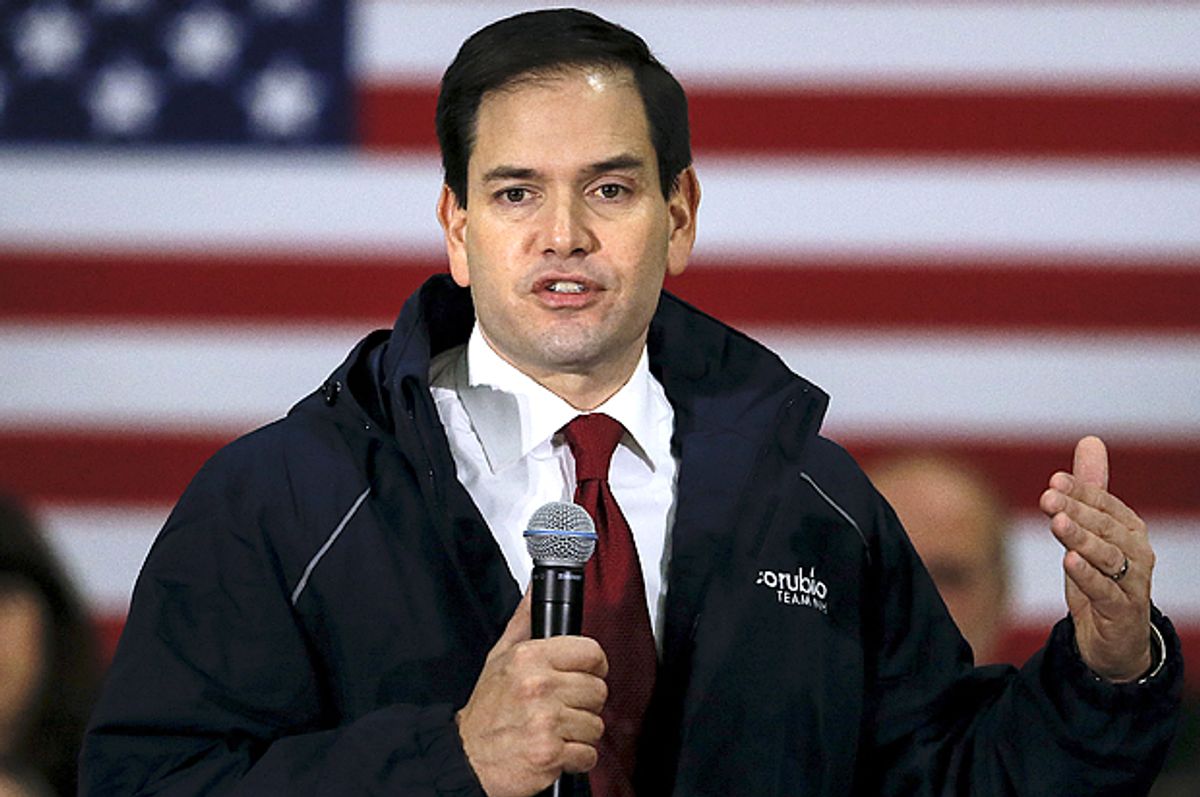 President Obama visited the Islamic Society of Baltimore yesterday and gave an interesting speech about Muslims in America, religious freedom, and tolerance in an age of terror-related panic. The core of Obama’s message was that Muslim Americans are no less American than anyone else, and the recent spike in anti-Muslim discrimination is anathema to a society that values religious freedom. “It’s a challenge to our values -- and that means we have much work to do,” Obama said. “We’ve got to tackle this head on. We have to be honest and clear about it. And we have to speak out. This is a moment when, as Americans, we have to truly listen to each other and learn from each other.”

This is actually the second time in recent months that Obama has made a big speech about the dangers of discrimination against Muslims in America. Back in December, in an address from the Oval Office, Obama said “it is the responsibility of all Americans – of every faith – to reject discrimination. It is our responsibility to reject religious tests on who we admit into this country. It’s our responsibility to reject proposals that Muslim Americans should somehow be treated differently. Because when we travel down that road, we lose.”

Messages and tolerance and inclusion have been a key part of the White House’s response to rising concern over Islamic State-linked terrorist attacks, and he’s used them as an appeal to national unity in a time of unease and fear. “None of us can be silent,” he said yesterday in Baltimore. “We can’t be bystanders to bigotry. And together, we’ve got to show that America truly protects all faiths.”

It’s tough to find something to disagree with here, but Marco Rubio somehow found a way, responding to the president’s Baltimore speech with one of the ugliest and most nonsensical attacks I’ve ever seen from a supposedly mainstream presidential candidate. Here’s what Rubio said:

“Look at today – he gave a speech at a mosque,” Rubio continued. “Oh, you know, basically implying that America is discriminating against Muslims. Of course there’s going to be discrimination in America of every kind. But the bigger issue is radical Islam. And by the way, radical Islam poses a threat to Muslims themselves.”

“But again, it’s this constant pitting people against each other -- that I can’t stand that. It’s hurting our country badly," Rubio said.

So, according to the rising favorite of the Republican Party establishment, the very act of giving a speech in a mosque – not the content of the speech, not its tone, but the thing itself – is an act of division. Why? Because the president, by setting foot in a Muslim house of worship, is “basically implying that America is discriminating against Muslims.” So the “division” here, per Rubio, is between people who acknowledge the observable reality that Muslims face discrimination, and people who choose to deny that such discrimination exists. Rubio himself is one of those people – after Obama’s Oval Office speech in December, Rubio attacked Obama as “cynical” for addressing Islamophobia, asking: “Where is there widespread evidence that we have a problem in America with discrimination against Muslims?” (The evidence is literally everywhere.)

Having stood up for people who don’t believe anti-Muslim discrimination is a problem, Rubio moved on to dismissing concerns about discrimination, period. “Of course there’s going to be discrimination in America of every kind. But the bigger issue is radical Islam.” The point Obama keeps trying to make is that tolerance and inclusion are effective weapons against the spread of radical Islam because they debunk the terrorist propaganda that portrays Western countries as being at war with Muslims. Also, how can someone vying to be the President of the United States support the morally vacuous position that discrimination against a religious minority is just something to be taken in stride?

Recall that Rubio himself released an ad saying the 2016 election is “about the essence of America, about all of us who feel out of place in our own country” and the “millions with traditional values” who are “branded bigots and haters.” He was quite obviously referring to Christian conservatives and poking at the sense of persecution they feel by the advance of gay rights. But when it comes to anti-Muslim bias, his attitude is “eh, it happens.”

This attitude isn’t just morally repugnant, it’s also outside what used to be the mainstream Republican political tradition. The last Republican president visited a mosque in Washington, DC less than a week after the 9/11 attacks and offered up some truly harsh rhetoric for any American who would dare discriminate an American Muslim. “Those who feel like they can intimidate our fellow citizens to take out their anger don't represent the best of America,” George W. Bush said. “They represent the worst of humankind, and they should be ashamed of that kind of behavior.” Jeb Bush praised Obama for delivering yesterday’s speech, saying “I think it’s important for the president to lead in this regard.”

Rubio, however, knows what today’s conservative movement wants to hear. According to the Pew Research Center, 59 percent of Americans agree that Muslims face “a lot” of discrimination in this country for being Muslim. Among self-identified conservative Republicans, however, the opposite is true – by a 62-32 margin, they don’t think Muslims face a great deal of discrimination. And so Rubio is helping conservatives feel like the true victims here, indulging their suspicion that Obama is just trying to make them feel bad because they choose to believe against all evidence that anti-Muslim bigotry isn't a problem.