Thanks for nothing, Facebook: #FriendsDay is our latest reminder that curated selves are becoming "more real than real"

“Here are your friends,” the generated #FriendsDay video says — and, as if to warn us: “Well, some of them” 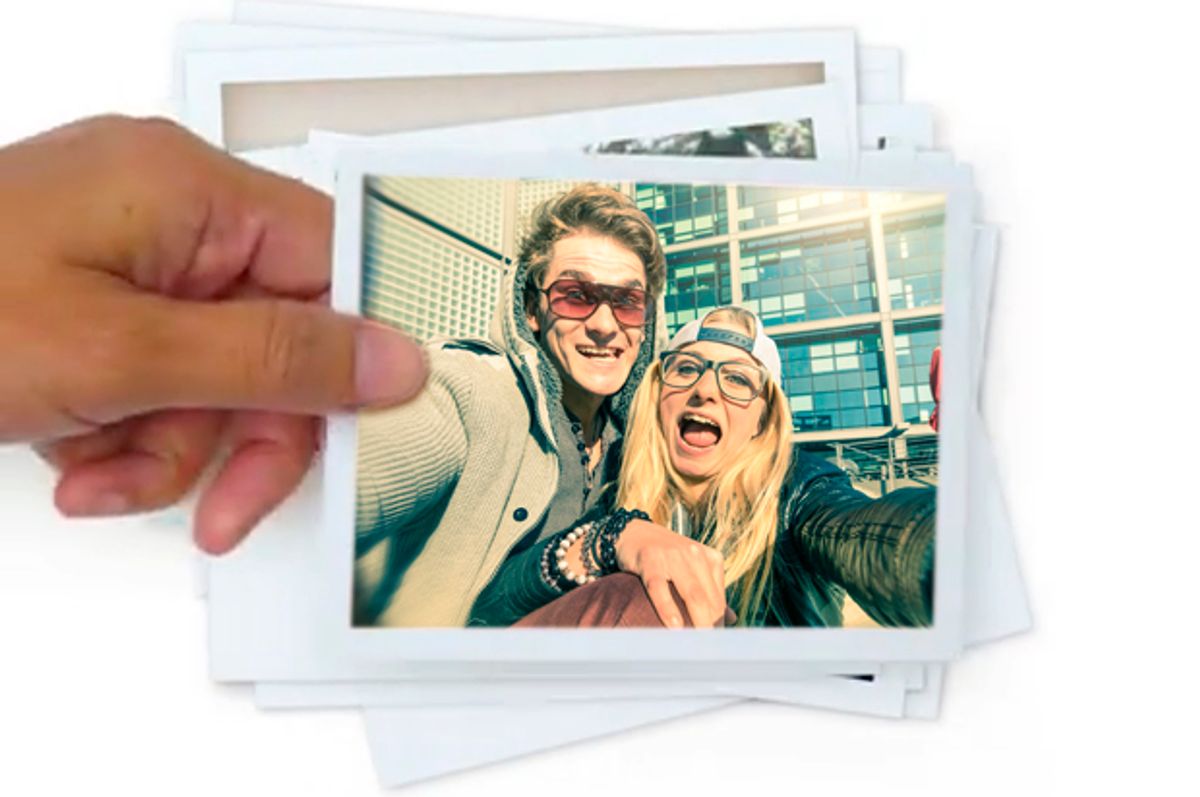 Today is #FriendsDay on Facebook, an invented holiday for a virtual community that, with 1.3 billion profiles, can be considered the second largest “country” in the world. To celebrate, Facebook invites users to generate a little video made up of photographs of their friends.  “Here are your friends,” the title cards announce. “Well, some of them,” it demurs, as the photos keep coming. “You’ve shared these moments.”

Have you? After viewing her video, one friend posted, half in jest:  “I have no human friends.” Of course she has friends, but her digital self only posts photographs of her dogs. Lots and lots of dogs. A different friend wrote on her own page: “Just glanced at my FB ‘friendship’ movie, and the first ‘friend’ that comes up has an image that says ‘EAT A DICK.’ Love that.” Because there was no accompanying movie for her friends to check out, to determine (in the name of science, of course) what this ‘dick’ business was really all about, she clarified: “I didn’t post mine because it was picking some really random stuff, like photos that weren’t of people, photos from TBT, photos of Ted Cruz ....The first photo, the photo of me, was of David Bowie from ‘Space Oddity’.”

Just to be clear: in real life, she is not David Bowie, and she loathes Ted Cruz.

Some friends like their Facebook movies, saying that it reminds them that their lives are blessed. Others think theirs came out “really boring,” and they refused to post them for that reason.  Either way, because the #FriendsDay movie is meaningless fun, these discontinuities between human friends and their virtual representations seem hilarious. And then we blame the algorithm for changing them into their pets, via technology as magically efficient as Minerva McGonagall’s wand. But subtle discontinuities, like a picture thrown into your movie of some kid from grade school, friended out of a sense of obligation, are only intelligible to those who know you in you in real life.

And this is where things get interesting. As digital communities expand, social media has given parthenogenic birth to homo academicus--not “academic man,” but the postmodern creature who lives in your head. As we sift through images of our curated experiences on Facebook, we do not relive our past so much as we recreate ourselves out of selected memories. Thanks to our willing collaboration, Facebook is creating an alternate reality we like better than the kind that wrinkles and ages.

Rapidly, almost without our paying attention, our virtual selves are becoming “more real than real.” This was a line spoken by the corporate tyrant in “Blade Runner,” a film that directly explores the power of constructed memories as a medium to control the masses. The manufactured beings called replicants are self-conscious, yet only one, the most sophisticated of them all, is self-aware. (And yes, I know there might be another one.) To forestall Rachel’s psychic collapse, her creator shows her photos of “her” childhood. They are actually photographs of his own daughter growing up. The result: the creation of artificial memories in her mind, not achieved via implant but by Rachel’s existential longing to make sense of her being.

But the film’s most famous scene is one where the replicant hunter Deckard (Harrison Ford) finds a photo of a cluttered room while searching an equally cluttered apartment. Popping  it into a viewing machine, Deckard watches as it flings up a grid, magnifies details on command, and eventually zooms through a door leading into a different room where a mirror reflects the image of a beautiful woman. Is she real, or a replicant?

Notably, that entire sequence borrows from Velasquez’s "Las Meninas," 1656, a painting that shows the artist, Velasquez, as he paints the very canvas. Look more closely, however, and eventually you will find an actual mirror hanging on the back wall. The two people reflected in the mirror are the king and queen of Spain.

In English, the title, “las meninas,” means “maids of honor.” They surround the Infanta Margarita, and it is understood to be her portrait. In the foreground, however, there is a very large dog. Children might well think the painting is about him. Arguably, however, "Las Meninas" is the world’s first selfie—a selfie of the king and queen of Spain--with the painter performing as the obedient hand “taking” the picture at their bidding.

As a self-determined image, the rulers of Spain show their utter control over this artificially constructed world. Everyone inside it is under their rule, the painter included. None of them could be called their friends. It is possible to mistake them as such. The painted walls are hung with more paintings of people, the 17th century version of the Facebook movie announcing: “Here are your friends. Well, some of them. You’ve shared these moments.” War. Conquest. Good times.

That painting offers reproductions of originals. Today, we have simulations of substitutions. The most important essay on mechanical reproduction was written in 1936 by critic Walter Benjamin, who had this to say about movies:  “They put the public in the position of the critic…but require no attention. The public is an examiner, but an absent-minded one.” The logical result of a culture of distraction? In that lacuna between ego and entertainment, Benjamin argued, politics become ritualized into fascism. So yes, that #FriendsDay Facebook movie is meaningless. It's about nothing at all, just so many moments adding up to a false reality. We criticize it, laugh, and by tomorrow, with a shudder of mourning, it will have already been gone.