The many faces of Martin Shkreli: His most obnoxious smirks, scoffs and grins from today's Congressional hearing 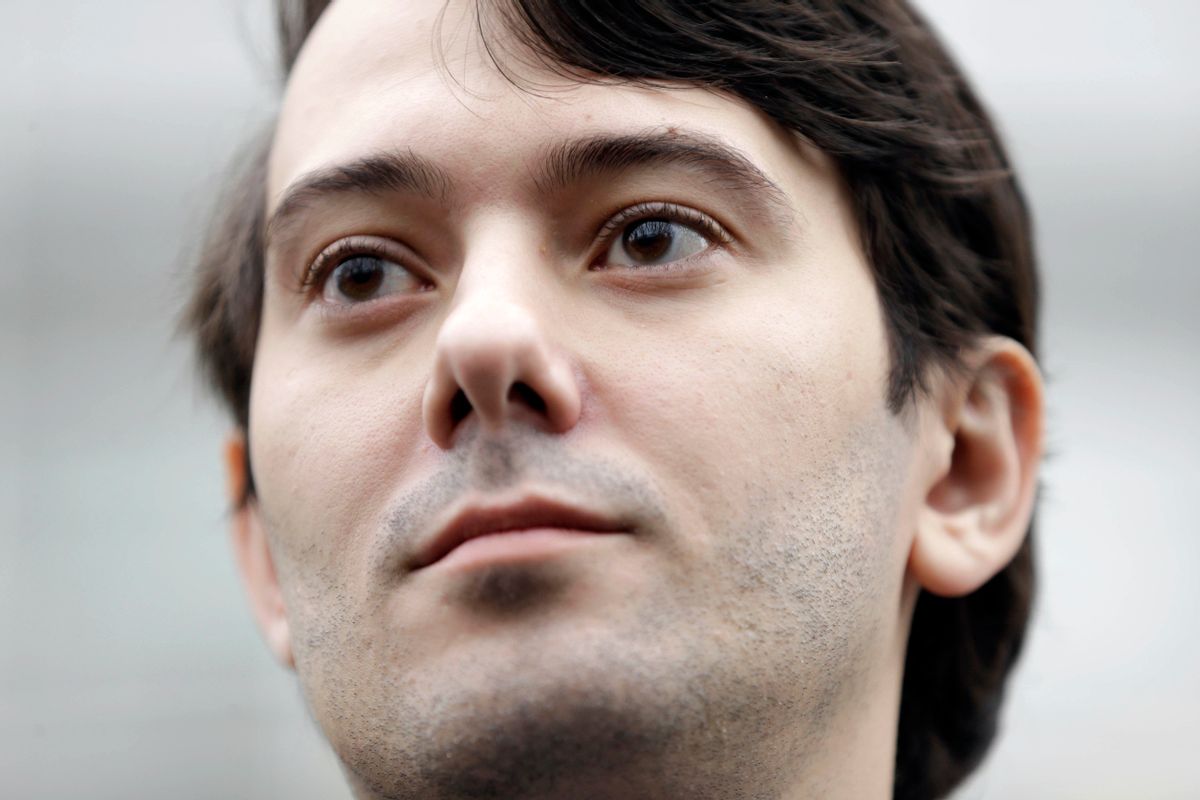 Former Turing CEO Martin Shkreli was subpoenaed to appear today in front of the House Oversight Committee. And, as promised, he time and again pleaded the 5th. Not much more to report on, in this case. A transcript would be: "On the advice of counsel, I will invoke my 5th Amendment privilege against self-incrimination and respectfully decline to answer your question" ad infinitum.

Video of the "testimony" is 5,500 percent frustrating. Worse yet, the perpetually smug "pharma-bro" reaches peak self-satisfaction during the hearing, as evidenced by endless punchable contortions of his weaselly face.

But what if Shkreli didn't have to talk? What if every iteration of his dirtbag grin was another piece to the Shkreli puzzle? They say a screengrab is worth a thousand pull-quotes. Above, we have square-one Shkreli. By this point, he's declined to make an opening statement and made one stumble-free pass through his "At the advice of counsel ..." spiel. Here is the moment Shkreli recognizes--halfway through his third go-round of pleading the 5th--that he's effectively trolling Congress. (Note also that his attorney, Ben Braffman--the consigliere-type slowly melting screen left--has not moved. This is called potential energy. More on that later.) Here is a little blip. Shkreli has just answered "yes" to a question, regarding the pronunciation of his name, from Congressman Trey Gowdy. How could the wunderkind financial wizard be duped so easily into going off script by a guy who thrice struggles to pronounce "reasonably"? Shkreli breaks the fourth wall. Who's really on trial here? Shkreli plays hard-to-get because he knows that makes me want to interrogate him more. What a tease. He's subpoenaing Congress to appear before him. Bit of a miscommunication here. Braffman went for the left ear, Shkreli turned right. Too late to correct; don't want to risk kissing under oath. Remember my mentioning potential energy? Here, Braffman asks to be recognized, is swiftly shut down, and complains Gowdy is "making illegal arguments about my client." Think of a bedspring popping. Major turn of events: Rep. Elijah Cummings takes Shkreli's unwillingness to talk as an opportunity for reprimanding. Around now, Cummings is telling Shkreli, "I wish you could see the faces of people … who cannot get the drugs they need.” Don't break now, Shkreli; stay on brand. Cummings: "You have been viewed as the so-called 'bad boy' of pharma." This is Shkreli's danger-is-my-middle-name face. Very intimidating. Cummings: "You could use this opportunity to come clean, to right your wrongs." Full discretion, I was making the same face when Cummings said that, but for very different reasons. This is the moment directly before Cummings asked Shkreli, "Are you listening?" ... This is the moment directly after. And, without any more questions from the Committee, Shkreli's dismissed and on his way to steal your girl: